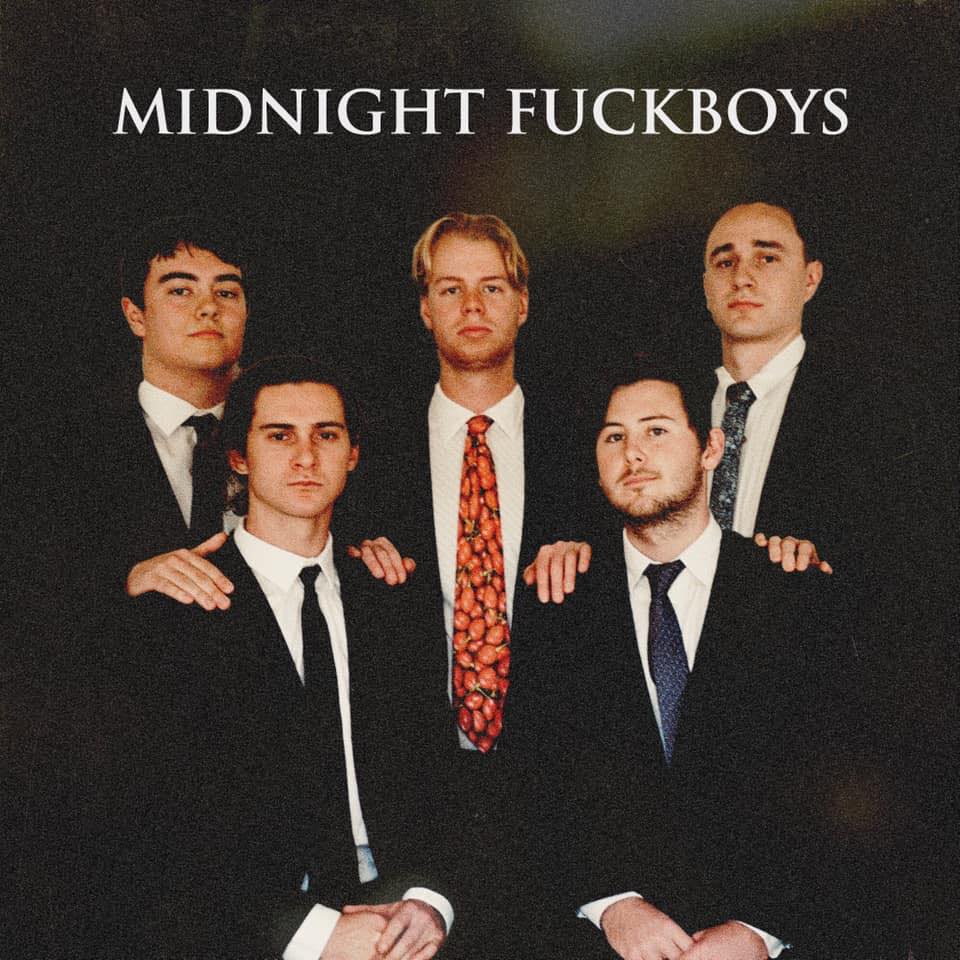 For a debut, Midnight Fuckboys have stormed out the gate and swung for the fences with goon-fuelled voltage that marks them as talent to watch, Film Editor Rhys Lloyd-Jones writes

Rhys Lloyd Jones
3rd Year English and Film Student. I Put the FUN in Fundamentally Incapable
Published at 10:30 on 11 August 2020
Images by @MidnightFxckboys on Facebook
Greatest Hits is a deliberately shaken up bottle of coke. Like the exploding soft drink, it is an adolescent frenzy of delight and bravado,  fizzing and foaming with uncontrollable abandon. Midnight Fuckboys are clearly having fun, yet they don’t seem to be able to reign it in. The burgeoning Australian rock band, Midnight Fuckboys, have crept around the outskirts of indie rock since 2018. They’ve released a handful of songs, yet they’ve mainly stuck to touring locally on the other side of the world. Finally, with a hilarious and understated marketing campaign, they’ve released their debut album to the world.
Musically, the band is undoubtedly talented. There is an unusual combination of clear cut rock with the high harmonising of 80’s pop. The guitar and base play off each other with affection, almost trying to outdo each other on most tracks. Vocally, the band harmonises with the same passion as a power ballad. In fact, Greatest Hits is a romantic odyssey disguised as a rock album. The strain and emphasis on elongated notes and high octave singing is akin to Bonnie Tyler or Spandau Ballet. Yet, instead of for tragic lost love, the band is crying out for each other. Each track is almost a tribute to intense friendship and platonic adoration, the camaraderie between the boys hyper charging each note. The only down side to this exuberant style is the lack of a clear, crisp sound. Some tracks like ‘Out of Luck’ play to this strength. This is a stellar track, which showcases the unique flavour of chaos that Midnight Fuckboys seem to revel in. The messy, rushed escalation of vocals and instruments echo the frantic nature of a whirlwind relationship, as the song stacks up like a wobbling jenga tower, ready to come crashing down. But this only hinders some of the weaker tracks. ‘Under Your Spell’ doesn’t feel quite finished. It’s a fast paced belter of a song, but is let down by the uncomfortable mixing that echoes with a tin-like vibration.
Despite the lack of control, Greatest Hits is an exceptional debut. Coupled with powerful vocal talent, the album succeeds as a sensory experience. Perfectly capturing the haze of a crazed party, Greatest Hits is an ode to the heightened emotion of youth; the eccentricity of your friends, that failed stab at romance, the petulant jealously of a lovelorn teenager. The album crackles with irreverence and nostalgia, filling your nostrils with the cold night air and your eyes full of neon lights. The album encapsulates the faux bravado of an insecure adolescent who find comfort in their friends. The tracks each reflect various emotions, complexly hidden within each other, as though struggling to be expressed. ’Harry’s Never Had A Girlfriend’ is an intimidating showcase of hardened rock, yet the lyrics speak to failure and concern. ‘Goon and Juice’ is a funny, hearty anthem of celebration and revelry, which almost drunkenly chants its way to the finish, yet it is followed by ‘Why You Going Home So Early,’ a cleverly written ballad, all about the fear that your friend might move on without you. This is a heart broken lament of change that fights and rages all the way to a climax that, whilst funny, is strangely touching; Greatest Hits feels almost like a final hurrah for a group of boys who don’t want to grow up, but know they must.
The band know when to go as hard as they can and when to understate things. ‘Bow and Arrow’ is a softer style of rock than most of the other tracks, carefully incorporating a piano weaved through a gentle mix of drums and quieter vocals. This jumps from a rising, powerful chorus to softer verses with surprising ease and it is one of Greatest Hits‘ most catchy tunes. ‘Stumbling Drunk’ is one of the album’s more conventional tracks, yet it is an accomplished, striking song that utilises the powerful vocals of Midnight Fuckboys in a reluctant, romantic stand out of the album.
Midnight  Fuckboys should be complemented for their lyricism. These tracks are witty, self deprecating tunes that succeed in the rare job of combining punchlines and song hooks. Tonally, the adolescent, cocky tone is similar to other acclaimed albums such as A Grand Don’t Come For Free (The Streets),  A Guide to Love, Loss and Desperation (The Wombats) or Whatever People Say I Am, That’s What I’m Not (Arctic Monkeys). Yet, this album sets itself apart by simply being funnier than the rest. It is a confident, self assured piece of work that is one of the recent highlights of the indie rock scene. Whilst this album is unusually short and the unhinged, chaotic style of music occasionally sounds messy, their unique sense of music and humour is a joy from beginning to end. For a debut, Midnight Fuckboys have stormed out the gate and swung for the fences with goon-fuelled voltage that marks them as talent to watch.