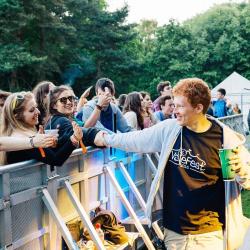 Matt McCrory
Music Editor, English Language student and otherwise barely functional being.
Published at 12:03 on 29 May 2016
Images by moulettes.co.uk/
It’s not often that you find a five-piece that incorporate cello, bassoon and autoharp into their setup. That’s exactly what Moulettes do, blending obscene instrumentation on their fourth record Preternatural. This Glastonbury-born band create a bizarre brand of psychedelic folk music fronted by the vocal harmonies of Hannah Miller, Ruth Skipper and Raevennan Husbandes who, besides having really cool names, also play cello, bassoon and electric guitar. Cool.

The first thing that hits you is how off-the-wall crazy it is. Album opener ‘Behemooth’ has got these jumpy riffs that could have come from a metal album, which makes the fact that they’re being played on a cello all the more bizarre. They somehow transition from verses akin to wackier cuts from Alt J’s This Is All Yours to choruses that could come from a Queen album set in space on ‘Bird of Paradise (Part 2)’, of which I could find no evidence of part 1 existing.

All of this is set to mad subjects for songs. This press release from the band says that they were inspired by ‘Octopus-chameleons’, for some reason. All I can decipher from the sinister instrumentation and song names like ‘Hidden World’ and ‘Medusa’ is that they’re going for some sort of Lovecraftian horror type-deal. Eerie vocal melodies on songs like ‘Patterns’ refer to indecipherable secrets set to pulsing electronics and distorted bassoon.

I finally figured out the secret that Moulettes had spookily referred to throughout Preternatural after a copious amount of confusion. The secret was that to truly appreciate this band you had to sit back and simply admire the brazen niche that Moulettes have dug out for themselves. It’s impressive that they could have organised insane instrumentation to create a bizarre sound in order to express such incomprehensible subjects. They do all this and, against all odds, make it sound somehow good. I cannot help but to be flabbergasted and to give this album a full and hesitant recommendation. I can’t comprehend a single social occasion in which Preternatural is appropriate, but I can’t help but to be quizzically glad that it exists.