The return of Robyn sees the dance pop virtuoso revitalised on all fronts and enthused by the abandonment of heartbreak, Marianne Holt reviews 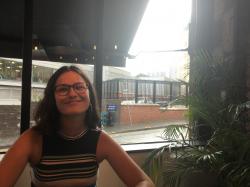 Robyn has spent eight years crafting an album of nine flawless songs with production so deep you feel like you could fall through it. Honey is Robyn’s best work to date, and, in my eyes, is without a doubt the best album of 2018.

Robyn has mastered the art of sad bangers- no-one else in the music industry has provided us with as many floor filling anthems that command the listener to simultaneously dance and weep. We’ve all, at some point, comforted a crying friend who is cuddling a bottle of rosé to ‘Dancing On My Own’; a new soundtrack to drunk-crying about unrequited love was certainly overdue. Robyn provided us with this in the form of ‘Missing U’, the lead single from Honey.

Robyn premiered the devastating disco back in August on BBC Radio 1- ‘Missing U’ was the first solo material from the singer in almost a decade. Robyn told Annie Mac that an amalgamation of sadness and uplifting is essential to give people hope in tough times. ‘Missing U’ does exactly that: it is lyrically devastating, yet musically euphoric.

Honey is an album of two moods: The first half of the album flows beautifully through stream of consciousness (‘Because It’s In The Music’ is the exception to this; this timeless classic pop song tries it’s best to lift us up after the depression session that is ‘Missing U’). In the first half of the album we see a more vulnerable side to Robyn, as the songs are more slow-paced and pensive, culminating in the incredibly moving double-bill of ‘Baby Forgive Me’ and ‘Send To Robin Immediately’.

The second half of the album unfolds, and it is sheer elation. Robyn describes her new sound as ‘soft ecstasy’, embodied in the title track of the album ‘Honey’. This track starts softly and builds up in a way that is reminiscent of ‘Green Light’ by Lorde, taking the listener into another dimension. Her 2010 album Body Talk was quintessentially a pop album, and although critically acclaimed, the production is occasionally shallow and tinny. ‘Honey’ and ‘Between The Lines’ denote Robyn’s transcendence from pop to club music; let’s face it, she well and truly came for Disclosure with the horny house banger that is ‘Between The Lines’.

The anomaly of the album is ‘Beach 2k20’ (which sounds like the Wii shopping channel went into a K-hole). This song is a meandering diversion that could be a skip-track in lesser hands, but instead takes you off on a strange daydream wondering what she means by the beach paradise she’s inviting you to two years from now.

‘Ever Again’ is an uplifting closer to an album that delves into the spectrum of human emotion. In this groovy track, Robyn renounces the bittersweet dance bops she’s made her career on (and starts the album with). Robyn vows to the listener that she is never going let herself be broken-hearted ever again, and that, from now on, she is only going to sing about love. Obviously, Robyn cannot guarantee a future free from heartbreak, and the message of this song is completely incompatible to that of ‘Missing U’, but the defiant tone of this song persuades the listener that heart-break is a state of mind.

Honey is an unmissable treat; in just 40 funky minutes she guides you, holding your hand firmly, to the ultimate Scandinavian disco. I for one am too impatient to wait another eight years for another album. The only solution seems to be to break Robyn’s heart again, to ensure that another album will be on its way.