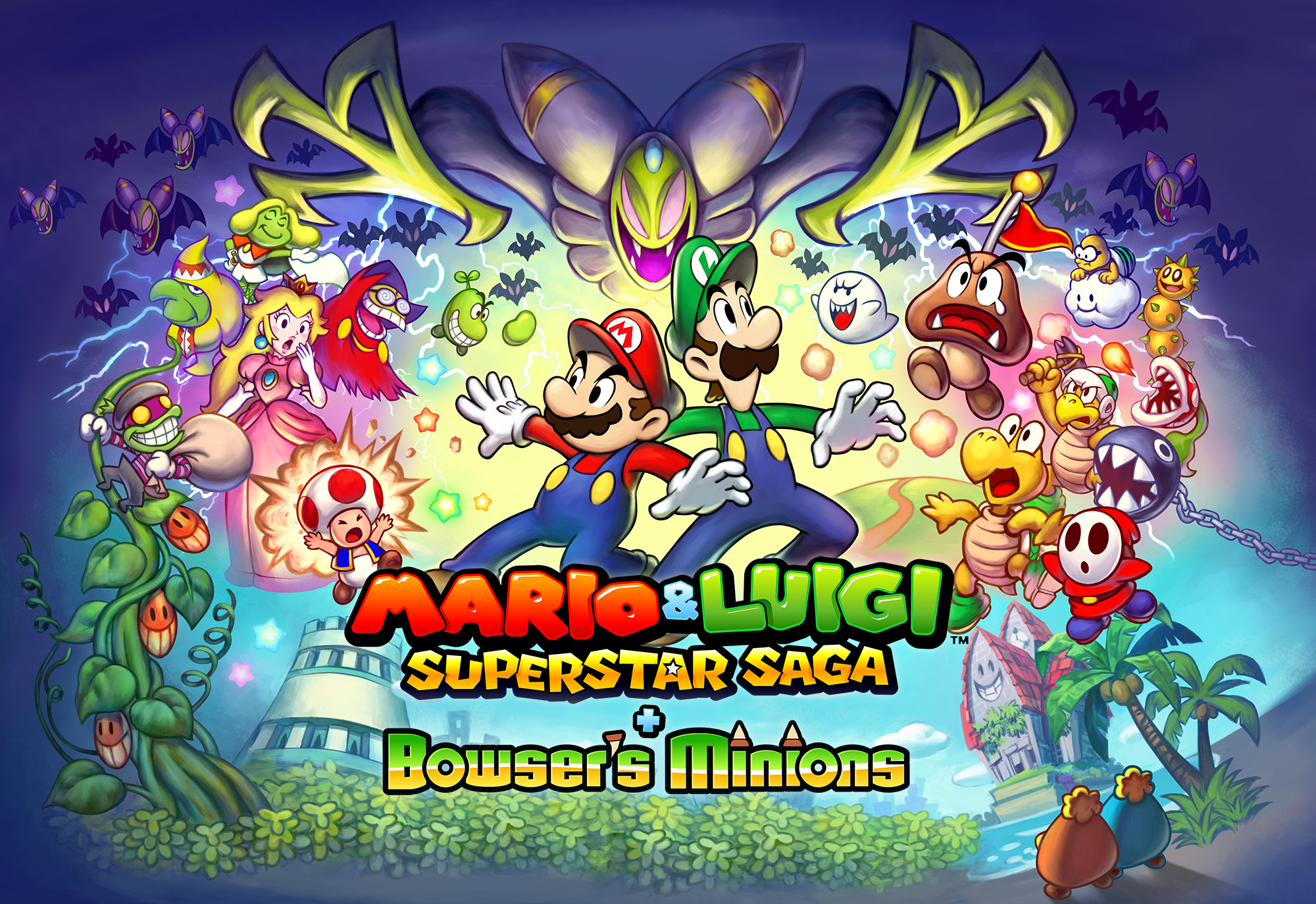 AlphaDream: From Bowser to Bust

Kieren Platts
Huge loser, passionate about computer games and audio dramas, lives with three beautiful housemates who don't want to talk about either.
Published at 16:40 on 28 October 2019

Tissues at the ready; on Wednesday, 2nd October 2019, the world woke up to the news that AlphaDream had filed for bankruptcy. Personally speaking, AlphaDream games were some of the seminal games that I grew up with – my taste in, well, everything would not be the same as it is today if not for their games. But, more broadly speaking, AlphaDream’s games always tended to straddle the line between badly-kept-secrets and mainstream success – it’s difficult to place exactly where their role even within Nintendo was. So, like a celebrity who’s died whose music you never really paid much attention to, it’s time to put AlphaDream in the spotlight for what could just be the last time.

AlphaDream (originally Alpha Star) entered game development in 2000, founded by Tetsuo Mizuno, President of Square during the “golden era” of RPGs in the 90s. Mizuno oversaw production of Final Fantasy V through VII, as well as Chrono Trigger, Secret of Mana, and the original Super Mario RPG for SNES. An impressive background, to say the least, and even upon leaving Square, Mizuno was not yet finished with RPGs. AlphaDream quickly became a second party developer for Nintendo, following a couple of Japan-only titles which served as proofs of concept for the explosively successful Mario & Luigi: Superstar Saga for the Gameboy Advance in 2003.

It was Mario and Luigi as they’d never been seen before. A diplomatic ceremony between the Mushroom Kingdom and the Bean-Bean Kingdom, when suddenly the Beanish witch Cackletta and her minion, Fawful, steal Princess Peach’s voice.  The two moustachioed plumbers must traverse the Bean-bean Kingdom, encounter characters both familiar and new, on a turn-based-battle quest to restore Peach to her former self and stop Cackletta’s ultimate plan.

I’m sorry, did you say something? Yeah, that is a weird plot for a Mario game, isn’t it? Let’s back up for a second.

The Mario & Luigi series is not the same as the Mario series, where running, jumping and power-ups are expected. AlphaDream’s genius in Superstar Saga is in repurposing these familiar characters and mechanics so that they all fit into a turn-based RPG, all the while telling an utterly compelling, completely unique – and yet so MARIO – story. The battles are half-rhythm based, half-party based, an evolution of Super Mario RPG, yet infinitely more fluid and satisfying to play. Mario and Luigi may attack independently, use items, or use team-up moves, similar to Chrono Trigger, and it just clicks. As for narrative, the breath of fresh air provided in this 20-hour long romp is staggering. Love is sprinkled everywhere, from the first proper appearance of the Koopalings since Super Mario World in 1990 to allusions to the RPG genre as a whole (Geno, anyone?).

AlphaDream’s success is owed entirely to the team behind it. Superstar Saga was directed by RPG director Yoshihiko Maekawa (Final Fantasy III, V, Anthology, Super Mario RPG), and overseen by Mizuno as well as Mario’s creator, Shigeru Miyamoto himself. Superstar Saga was also the big break for writer and designer Hiroyuki Kubota, who would go on to direct the rest of the Mario & Luigi games. Designer Chihiro Fukioka (Earthbound, Final Fantasy Mystic Quest, Super Mario RPG) followed Mizuno’s wake in leaving Square, and has worked on level design in every M&L game. Composer Yoko Shimomura wrote the score for the series, with an already impressive credits list: (Street Fighter II, Final Fight, Kingdom Hearts, Xenoblade Chronicles, and Final Fantasy XV, to name just a few). And finally, Toshizo Morikawa, single-handedly defining the art style for the series, combining the 2D concept art of 90s Mario with 3D 2000s Mario. The result is a vibrant, inked aesthetic that suits both cartoonish and menacing scenes. With an all-star team, and a fresh take on the most iconic character in video game history, how could AlphaDream fail?

Once sales had hit the million mark, it was absolutely time for a sequel. Mario & Luigi: Partners in Time is bigger, brighter, better in almost every single way, releasing in 2005 for the DS. Partnering up the brothers with their baby counterparts, flitting between past and present, with even more battle mechanics, even more characters, more worlds, more bosses, more screens, more jokes, more story, more everything. AlphaDream doubles down on the comedy-adventure in a game that feels twice as big as its predecessor, shifting 1.4 million copies by mid-2007. The visuals, one of the many high points of the series, sees itself refined here, and deep below Peach’s Castle, there’s a big hint that we haven’t seen the last of the series yet.

By July 2007, PiT had sold nearly 1.4 million copies worldwide. Having returned to AlphaDream’s own Hamtaro series in 2008, Mario & Luigi: Bowser’s Inside Story was next for the DS in 2009, frequently polling as one of the best games on the entire system. Adding Bowser to your team? Let’s do it. Multilayered plot? Can’t wait. Exploring/manipulating the insides of Bowser’s anatomy, taking back his castle from an old enemy, collecting block-shaped kittens, awakening a dark and mystical power that has slumbered since the founding of the Mushroom Kingdom, with the best final battle theme song ever written? Everyone was in.

There’s a reason Bowser’s Inside Story is so well received; AlphaDream now had history. With Mizuno and Miyamoto gone, the series was now in the hands of those whose careers M&L had shaped in the first place. Now studio director, Kubota had seen his creations grow up alongside himself. Mario & Luigi was now seven years old, and each entry showed increased maturity. Bowser’s Inside Story balanced a sense of humour with the dark, the tragic, and the impactful. Critical acclaim was met, the games had their own lore, AlphaDream had grown up, and Kubota’s vision paid off: 4.1 million times. 4.1 million units sold, worldwide, in just two years. 4.1 million people eagerly anticipating what story he’d tell next, his new characters, what worlds he’d take them to. AlphaDream had made it, and Mario & Luigi showed no signs of slowing down.

Enter the 3DS’s new hardware capabilities, and in 2013 Mario & Luigi: Dream Team brought fresh takes on the battle system in particular. 3D, both the visual effect and virtual space, was utilised, some still holding the game as the best use of 3D on the console’s entire library. But where there was celebration, there was also concern. Instead of going bigger, Dream Team took a much simpler direction. The new fuzzy art-style, while beautiful, was less suited to character-comedy. Reusing locations led to tedium. Fetch quests and a formulaic secondary dream-world with no focus on exploration – combined with the tropical island setting, it’s what Super Mario Sunshine was to Super Mario 64. Regardless, the game sold especially well for a two-year-old console, with 2.8 million units within a year of its release, but there’s no doubt that the M&L ball had been fumbled, yet not quite dropped. And hey, Sunshine was followed up by Galaxy, so a return back to form was inevitable.

Another game was already in development: 2015’s Mario & Luigi: Paper Jam. With every game since 2007, the Paper Mario series has famously disappointed fans with its oversimplification of the turn-based action and RPG mechanics, as well as a bare-bones story. It was a scenario that was worryingly familiar, and a cross-over between the two series could mean one of two things: pulling Paper Mario up, or dragging M&L down. Paper Jam still reviewed relatively favourably, but with the same phrases cropping up in reviews – “tedium”, “hand-holding”, “repetitive” – it wasn’t enough, and many fans skipped the game altogether. Four years later, Paper Jam is still the only M&L game to not pass one million sales.

It’s unsurprising then that AlphaDream, with its increasing staff, elected to remake Superstar Saga (2017) and Bowser’s Inside Story (2019) for 3DS as its next two releases. But, with the Switch’s dominance and the 3DS’s lifespan waning, the remakes sold embarrassingly modestly. AlphaDream were now outsourcing 3D sequences and additional gameplay elements to other developers, and though the budgets were increasing, income was not. On 1st October 2019, it was revealed that AlphaDream were in debt of ¥465m (£3.5m) and had filed for bankruptcy. Perhaps Nintendo would bail them out? It wasn’t unheard of. But as it stood, AlphaDream were making no money, and critically unremarkable games. After nineteen years, it seems like they’re done.

What next for the team members? And what of Mario & Luigi? AlphaDream’s journey from reinventing the most famous video game franchise in the world to dooming themselves into mediocrity is a sombre story indeed. So, here’s to that original team, and their wonderful world of serious and silly. Proving to the world that the Mario Bros. may just be at their best when telling stories no-one expected to be told.

Saddened by AlphaDream’s demise? Here are some articles that won’t leave you!