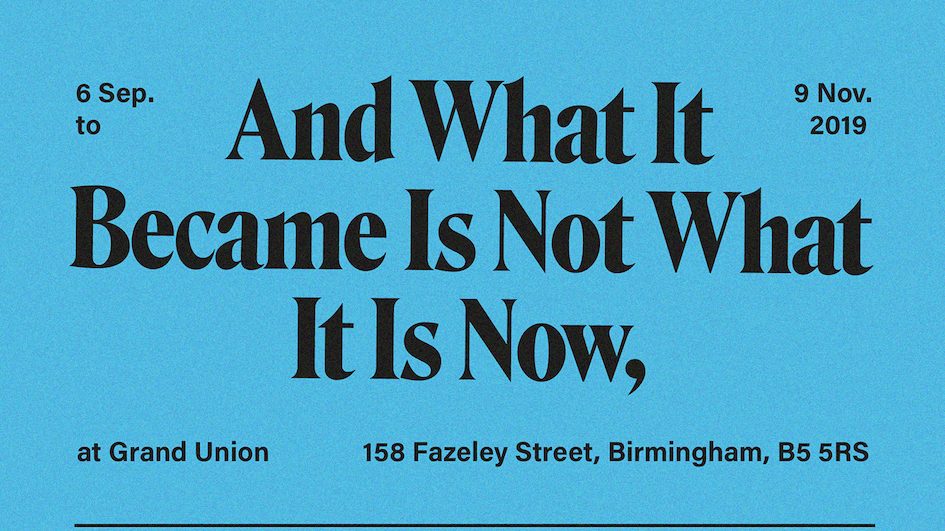 Review: And What It Became Is Not What It Is Now

Latin American culture is often embodied by the vibrant artwork of Frida Khalo, an undisputed global icon, or the vivacious colours in Diego Rivera’s Mexican murals. However, the recent exhibition at the Grand Union, And What It Became Is Not What It Is Now, designed by three unconventional Latin American artists who have long established talents in their relevant fields of artistry, inspires a completely new vision of South American art and its controversial, and often unaddressed past.

‘Cinco Retratos Digitales’ by María Agustina Fernández Raggio forms the first section of this collaboration. A Uruguayan artist known globally for her use of digitalising figures and producing provocative filmography, Fernandez Raggio has contributed a detailed exploration of powerful individuals after the deterioration of the Uruguayan military dictatorship in 1985. This five-channel video offers an interesting take on their characters and mannerisms. Each dignitary has been digitised, a first for any president or dictator in Uruguay, and the dialogue attached addresses themes regarding the individual and Uruguay as a whole.

The current and previous four presidents are joined in each clip by Fernández Raggio. Interestingly very present in all of these five film clips, the artist draws on the personal relationship, or indeed lack of it, between the individual and these deistical, out of touch figures of power. The subtle detail found in each video is remarkable and I found myself sitting for ages, trying to understand its meaning, resulting in my having to go home and research an awful lot of the artistic and political references in the artwork.

Exploring both the political and personal experiences of all five of these men, Ferandez Raggio is able to interpret the intricate relationship between Uruguay,its turbulent political past, the continued tensions and personal issues it raises.

Another key part of the exhibition displayed the work of Paola Monzillo. Monzillo is a long established talent in the world of conceptual art and artist film. Her insightful reflections on 16th and 17th century European views regarding South Americans and their culture through the etchings and engravings of the time was a real highlight for me. Entitled ‘El Cuerpo Alegorico de America’, I found this to be my favourite part of the exhibition and indeed, the most poignant for the visitor. The original engraving images used by Monzillo were extraordinary and the way in which she adapted certain parts to emphasise different thoughts and perceptions from centuries ago was quite innovative. Visually very beautiful, Monzillo’s artwrok evoked the dark truth behind the often overlooked memory of colonialism for both Europeans and South Americans. It is certainly not an easy task, but Monzillo has attacked the issue strongly while still applying the depth of sensitivity that such a topic deserves.

Likewise, Joaquin Aras explored the difficulty of cultural memory in Argentina through Argentinian cinema as the medium for his expression. ‘Entre recuerdos & remakes’ is quite an apt title seeing as Aras’ contribution seems to be centred on the unearthing of old films and soundtracks which have been forgotten to many, and his body of work questions why this is the case. In an almost interview style, Aras poses aged Argentinian actresses to watch various old videos and soundtracks, allowing them very naturally to discuss the forgotten, and thus, uncredited actors and musicians in the footage.

There was so much to appreciate in this exhibition, which was not only visually stunning but mentally stimulating and thought-provoking. Full of forgotten and unaddressed history, this exhibition is a must for anyone interested in South America or furthering their cultural understanding of this complex land.

And What It Became Is Not What It Is Now is on until November 9th at the Grand Union, Fazeley Studios in Digbeth.