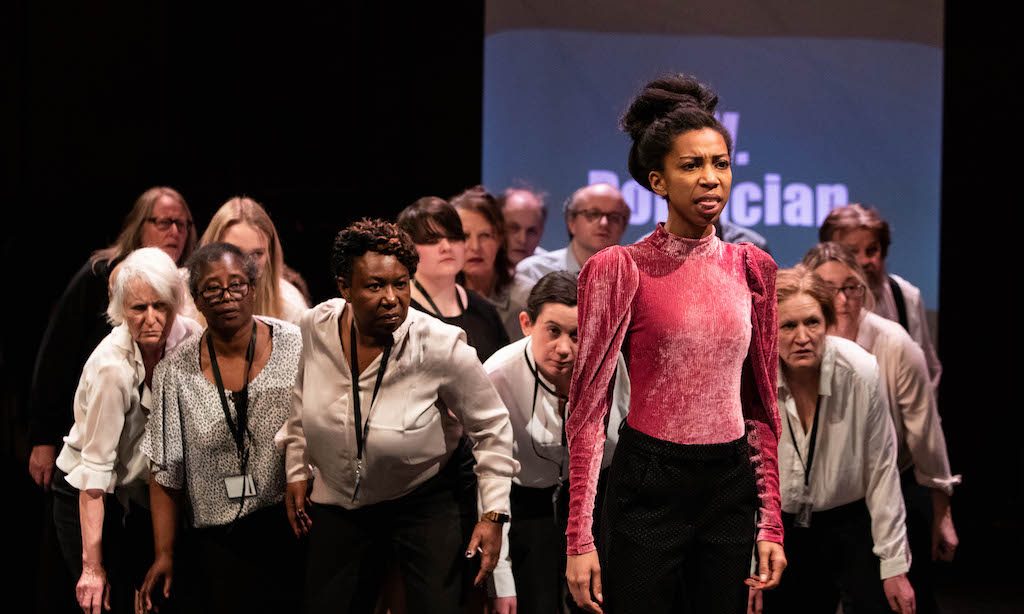 Beneath the City at the REP

Ancient Greek theatre traditions have been revived by Beneath the City, an interactive modern-day production that was performed at the Birmingham REP from the 16th-18th January. This unique play employs a Chorus of the ancient powers known as Furies to tackle the present-day crisis of racism within the criminal justice system. Taking inspiration from Aeschylus’ ‘Eumenides’, which was how the ancient Greeks referred to the Furies, Upstart Theatre asks the audience what power the public has to bring about change in an unjust society.

Shey Clarke is the protagonist of the play. Her brother, who was penalised because of his skin colour, ends up in prison and unfortunately dies. His death is ruled by the jury as accidental, but Shey seeks justice for her brother’s death, and is determined to find out who is responsible. Shey is not alone in this process. The Chorus of Furies, gods of vengeance who pursue and punish killers in the name of justice, accompany Shey on her mission. As a collective, they interrogate a prison officer, the vice president of the police, and a politician to find out who is to blame for her brother’s death.

The highlight of the experience for me, as a Classics student, was at the beginning. The director Tom Mansfield led the audience in clapping their hands and stamping their feet with force as he gave an invocation to Dionysus. Calling on the god of theatre to ensure the actors had a successful show, the invocation ended with the humorous addition of a libation, which consisted of an audience member pouring a cup of wine into a washing up bowl. Such a simple prologue really heightened the audience’s spirits, enticing them to believe they were a part of the performance from the very beginning.

The interactive aspect of the play added ambiguity, as the audience were asked to vote on how it ended, likening the audience to the ancient Greek jury that voted on whether Orestes lived or died in the ‘Eumenides’. The options were: let the Furies kill Shey so they have control over the justice system alongside the politician, or for the Furies to kill the politician to get justice for Shey’s brother’s death. Roughly half of the crowd voted for the politician to die, while others abstained. This demand from the Chorus of Furies for the blood of at least one of the characters varies to how the law court in Aeschylus’ play acquits Orestes of his actions, emphasising the high price of justice.

Nicole Sawyerr, who played Shey Clarke, committed to the role and delivered every line with conviction. The chemistry of the Citizen Chorus, a diverse group of non-professionals, made them appear as one group rather than lots of individuals. They stayed in character throughout which created an eerie presence to replicate the terror produced by the Furies.

However, the play felt rather disjointed. Each act was followed by lengthy intervals, filled with questions for the audience, and videos of the actors recounting moments of injustice they had experienced. The play lasted for just over an hour, and roughly 1/3 of it consisted of videos and facts on racial prejudice in the criminal justice system. Each intermission made significant points, but it did not allow for quick transitions, which meant that the pace of the play was slowed down, even though the tension was meant to be rising as Shey got closer to the truth. Maybe it would have been more effective if they had not tested the knowledge of the audience or asked us for our opinions, and instead placed the facts and the stories of injustice within the dialogue of the script.

Combining ancient Greek theatre traditions with modern-day interactive techniques, Beneath the City was certainly not your typical production. It had its positives, as the play carried a crucial, powerful message through the praise-worthy acting from Sawyerr. Yet the acting was hindered by the lengthy intermissions breaking up the performance itself.