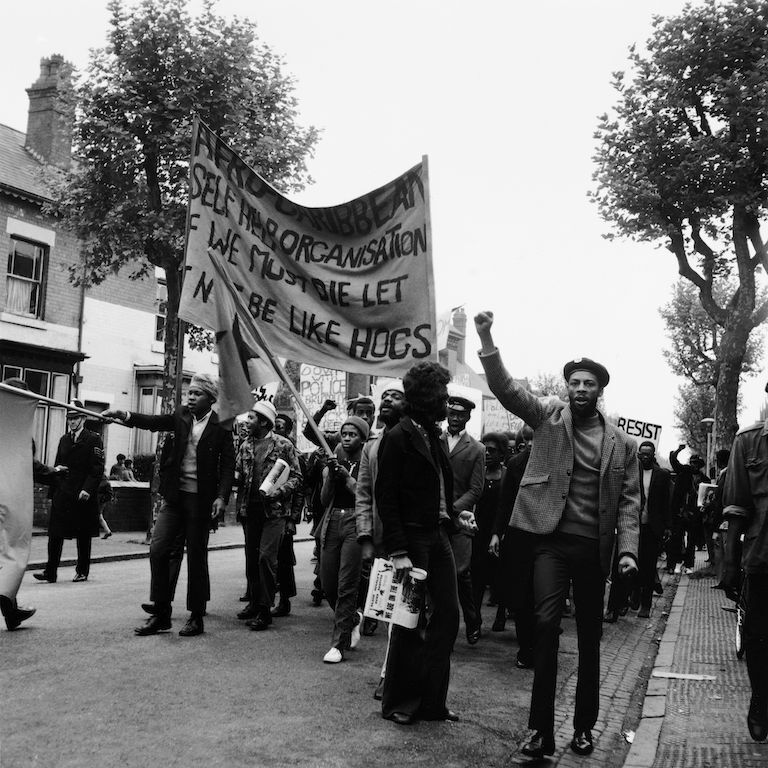 The ‘Birmingham Revolutions – Power to the People’ display at the Birmingham Museum and Art Gallery explores the various forms of protest and activism which have formed a key part of Birmingham’s history and it engages with issues occurring on a local and international scale. From the Priestley riots of 1791 through to the LGBTQ+ campaigns of today, the exhibition offers its visitors to discover the different types of action, art, fashion, literature and much more, which have taken place in the city’s vibrant history.

A part of the display is a newspaper account and information of the Priestly Riots of 1791, starting with a portrait of Joseph Priestly, a chemist who preached about repealing the Test and Corporation Acts and the need for a revolution in Britain against the corrupt Church and King. The riots began as citizens worried that revolution would come to Birmingham and protested outside the Royal Hotel where a dinner was held to celebrate the second anniversary of the French Revolution. The protest developed into one of the largest riots to happen outside of London in the 18th century.

Around the exhibition room, a number of historical banners can be spotted. They include the massive Forward Birmingham banner made by Sandi Kiehlmann and a group of local Birmingham women as part of the Museum’s 1992 exhibition ‘Women: Mothers, Workers, and Politicians 1910-1920’ which features a female figure holding a flaming torch in front of the Birmingham skyline, as the inside of the flames are embroidered with words such as ‘peace’, ‘education’, ‘equal opportunities’, ‘justice’, ‘use your voice.’ Furthermore, displayed are the Birmingham Political Union (BPU) banners, used during the 1830s, the Birmingham Women’s Suffrage Society Banner from 1908, embroidered with the city’s coat of arms, historically taken to women’s suffrage meetings and rallies all over the country.

The BPU, the Chartists and the women’s suffrage movement are confidently displayed throughout the exhibition, revealing paintings of important figures of those campaigns, such as Hugh Hutton, Catherine Osler, Geraldine Cadbury, and others. This reveals Birmingham’s active part in vital historical movements and the local people who helped make it happen.

Art displayed in various ways, used to make powerful statements without the use of words and with the aim to highlight important issues of their time, is a big part of this curated collection.  Different plaques, leaflets, and badges, are prominent throughout this collection. Standing out is also C. R. W. Nevinson’s painting La Patrie (1916) which portrays a horrific incident which the artist experienced as he came upon a goods yard full of dead and dying French German soldiers. The darkness emitting from this artwork seemingly contrasts the vividness of the rest of the exhibition, but as Charles Lewis Hind wrote in 1916: “La Patrie will stand, to the astonishment and shame of our descendants, as an example of what civilised man did in the first quarter of the 20th Century.”

If that sentence aims to depict humanity’s errors and the consequences of our actions – as it rightly does – the rest of the exhibition proves that people have the power to achieve positive changes if they come together as a community, believing and working towards their goals for the common good. Examples for this are the displayed items of the miners’ strike of 1972, the different documents commemorating the General Strike of 1926; the photographs of the different unions across Birmingham, honouring events such World Aids Day (1992) and the Speak Out Campaign (1993), the Union demonstration of 1987 and may more.

Visitors can also listen to the stories and experiences of Birmingham activists from Mrs Doherty discussing her family’s involvement with the women’s suffrage and socialist movements through Bini Butuakwa explaining the founding and impact of the Afro-Caribbean self-help organisation to LGBTQ+ activists discussing their experiences during the 1970s and 1980s.

The experience of black community is also recognised with photographs and items of important activists displayed throughout, such as one of Birmingham’s most successful writers Benjamin Zephaniah’s typewriter, Basil Gabbidon’s Gibson Les Paul Guitar, photography by Vanley Burke recording protests against racism and police brutality in 1972  and activists being arrested by police, the Africa Liberation Day march and more.

Overall, the exhibition manages to brilliantly achieve its aim of proving Birmingham as a city of diversity, progress, and shows us all the different ways in which we can learn from the past, yet not forgetting it.