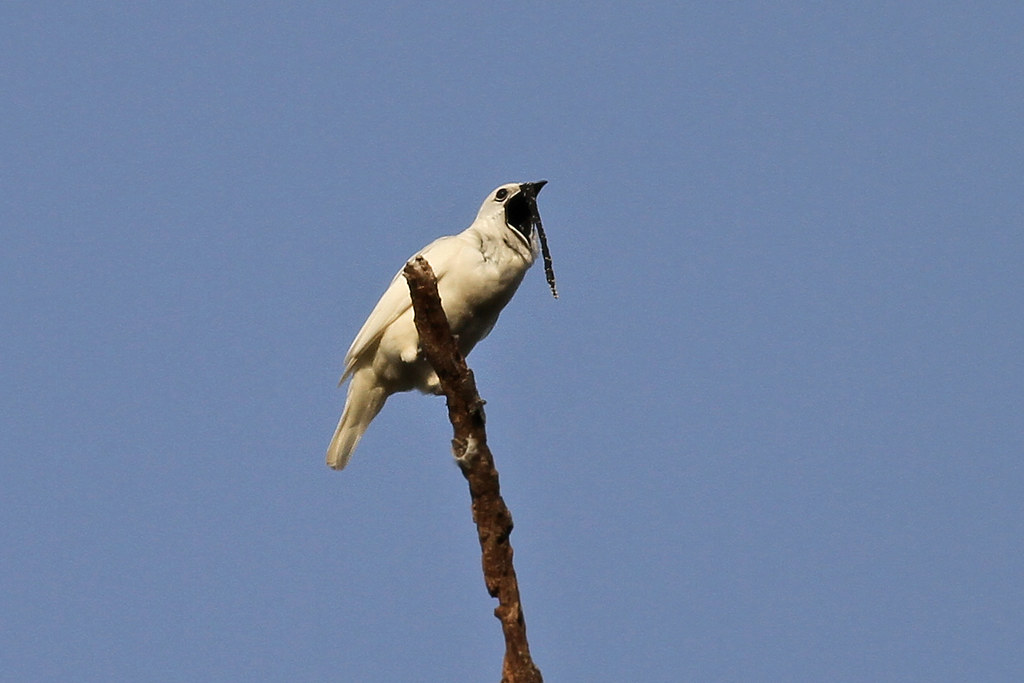 The male white bellbird (Procnias albus) is the world’s loudest bird.  Its call can reach 125 decibels, which is louder than a chainsaw or a thunderclap.  This record-breaking bird song was documented recently by biologists Jeffrey Podos and Mario Cohn-Haft who studied the species in its native habitat of the Brazilian Amazon rainforest.  They found that male white bellbirds are around three times as loud as the aptly named screaming piha (Lipaugus vociferans), which was formerly the world’s loudest documented bird.

Despite being the same size as a pigeon and weighing only 250g, the volume of the white bellbird’s cries can easily surpass a lion’s roar (114 decibels) or a howler monkey’s cry (90 decibels).  According to Dr. Cohn-Haft, they have a ‘really ripped’ stomach which helps them project their sound. Without these strong abdominal muscles, ‘their guts would blow out’. Their calls are extremely short, which helps them produce the noise at a high volume. In contrast, the females of the species do not produce any sound.

The researchers are still unsure why the male is so loud.  Unlike animals that make loud noises in order to communicate over large distances or to indicate territory, the white bellbird does his loudest calls when females are already nearby.  This suggests that it is an attempt to attract a mate. However, it is unclear why the males are so extremely noisy, especially when females can be as close as four metres away and willingly risk hearing damage due to proximity.  Many birds tend to tone down their displays when a potential mate is nearby to avoid frightening them, but male white bellbirds instead turn to the female and aim their loudest cry directly at her. As it is not yet understood why the birds do this, Dr. Jeffrey Podos described the males as ‘socially awkward’.