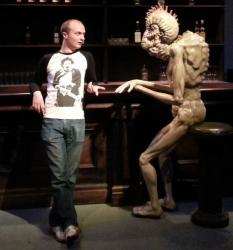 Tom Lofkin
Film Editor for Redbrick and English with Creative Writing student at the University of Birmingham
Published at 15:58 on 27 July 2014

Essentially Groundhog Day meets War of the Worlds. Edge of Tomorrow is the latest big budget sci-fi romp from Tom Cruise and is, despite a reasonably original and unique plot device, pretty standard fare.

The film follows Major William Cage (Cruise), a military man with a background in advertising rather than any actual combat experience. He is also a coward and will do anything to avoid fighting in a war against an invading alien race known as ‘mimics’, who are laying waste to most of Europe. After attempting to blackmail a high ranking general, his punishment is being sent straight to the frontline of the war, where he immediately dies and wakes up earlier that same day.

Yes, though contact with an alien, Cage is now trapped in a time loop where his death triggers the day to repeat over and over again, and as a result, he begins to learn from his frequent deaths, and the film sees him go from deserter to badass killing machine. On the way he encounters Special Forces soldier Rita Vrataski (Emily Blunt), also known as the ‘Full Metal B***h’, who may be the key to breaking Cage’s seemingly endless cycle and winning the war.

The acting is pretty standard, with the exception being Blunt, who shines as veteran alien killer and symbol of humanity’s war effort. The action is consistent with explosions, aliens and even Vrataski herself repeated killing Cage, all in aid of training him to become a better solider. All in all, Edge of Tomorrow is an exciting and imaginative sci-fi flick which requires your 3D glasses on, popcorn in hand and brain left at the door.

Seven out of Ten