EGX 2016 is an amazing opportunity to get to play many interesting and exciting new games, Gaming Editor James Lentschner tries his hand at Smash Up, Nomad Games’ factional card game 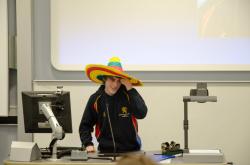 To play Smash Up you start by choosing two factions to play with, from options such as Aliens, Dinosaurs, Zombies and Wizards, and use the special abilities of these factions to claim bases from your opponents; earning points to win the game. Each turn you can play one minion and take one action, minions adding to the power of the base, that when it reaches it power limit distributes points to the players, depending on how much power they contributed to the base. Some bases also have special abilities that factor into the game once a player has taken them. The first player to take enough bases to reach 15 points wins the game!

Where the different factions come into play is through their special abilities, for example the Zombies excel at returning cards from the discard pile to be re-used again and again. With my short time with the game I decided to pair the Dinosaurs, a faction boasting strong minions, together with the Aliens, a faction the excels at stealing minions and disrupting the bases. Where the game really shines is the large number of possible combinations and strategies that these factions offer, once you begin to learn the strengths and weaknesses of different factions you can arrange them to create both incredibly effective and fun combinations. For example, Aliens have an action that removes all minions from a base that can be paired with multiple Dinosaur minions that power up depending on how many Dinosaurs there are on the base. This would allow you completely clear the enemy’s strong minions and replace them with your own, and possibly claim the points you need to win the game.

Smash Up offers a lot for both the casual and committed card game player, serving to be both a fun game to play with friends and an incredibly strategic game to master for those looking to compete against others.

The game is in early access now on Steam and gives you access to all the factions available in the original board game of the same name, including the mentioned Aliens, Dinosaurs, Wizards and Zombies.