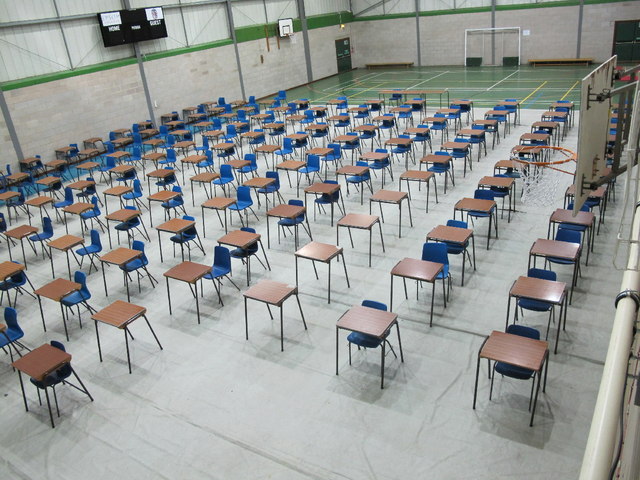 Comment Writer Vicky Wilson calls for reform of the UK’s flawed exam system, arguing that the wake of Coronavirus has shown to be an ideal time to reassess

Written by Victoria Wilson
Published at 12:00 on 20 October 2020
Images by David Hawgood

As the shockwaves of COVID-19 rippled across the globe, in March 2020 students were forced out of classrooms and exam halls and pushed behind screens, leading to the cancellation of A-level and GCSE exams. After reliance on teacher predictions caused concerns surrounding potential overinflated or biased grades, alongside uncertainty escalated by the government’s last-minute U-turn on statistical modelling, questions orbiting the efficacy of the standardised examination system have emerged. Are results built upon foundations of continuous evidence better than the rusting framework of exam performance based on one day? Ultimately, in 2020 the 2.4% increase in top A-level grades has allowed students’ best-case-scenario doors to remain open, leading them to further opportunities across not only a more level, but a wider playing field. According to a 2019 study by King’s College London, teacher assessments predicted 90% of differences between pupil’s true performance at GCSE and A-level, hence forming a ‘perfectly robust alternative’ to exams.

Consequently, there has been debate across the political spectrum as to how to approach assessment for the GCSE and A-level classes of 2021. Education secretary Gavin Williamson has recently initiated a three-week delay on the examination period, with rumours of increased multiple-choice questions on papers, or a more rigorous standard of mock exams this winter to erect sturdier back up grades for pupils unable to sit exams in the summer. Following the cancellation of National 5 exams (equivalent to GCSEs) in Scotland, pressure amongst students, teachers and universities alike is mounting for a full cancellation of GCSEs and A-levels. For example, Vice Chancellors of the University of Birmingham and Sheffield Hallam, Sir David Eastwood and Sir Chris Husbands respectively, have argued it would be ‘simply wrong’ for A-level students to focus on exams rather than learning and understanding their content. Ultimately, in the current climate, equality in exams has been rendered impossible by varying local restrictions, individual students isolating and unequal access to technology and a suitable home working environment. When paired with the infeasibility of students congregating in an exam hall, this provides a unique opportunity for crucial long-term assessment reform.

In the UK, improvements to the efficacy, fairness and syllabus content of the examination system is long overdue. Teenagers spend two years laboriously building foundations of knowledge and skill: five am alarms, cancelled plans and bitter canteen coffee, only to crack under the pressure of the final exam. Drowning out in two hours, the progress of two years. Examination has become survival of the calmest, a memory test weighted on whose lucky textbook flipped to the ‘right’ page in the waiting room five minutes prior, as students are quizzed on minutiae covering only a fraction of the course.

Simon Jenkins states that ‘tests demoralise pupils and demean and disempower teachers,’ quashing creativity through distaste towards the arts, and repressing independent inquiry through impractical, whitewashed syllabuses which orbit round a set of progress-omitting grades in an envelope. Not only is the examination system detrimental to students, but it seeps through, staining teachers’ working hours, of which only a third are subsequently spent teaching. It also pushes parents to invest in private tutors, spending collectively £6bn per year, hence carving an additional imbalance between class and opportunity.

Ultimately, it appears to be the numerical convenience of standardised testing that has created the current detached, impersonal and stressful educational environment, causing prevailing damage to the mental health of young people. We have all experienced a panicked exam hall mishap, forgetting to turn the question page over, or blanking out on that one fact you swear you knew the night before. Thus, it is no surprise mental health can grow precarious when the weight of your future appears to balance on that one fragile exam paper. Crammed exam timetables paralleled with late night cramming sessions offset all chances of a work-life balance, and the significance strung on A-grades can dangerously intertwine attainment with self-worth. According to Gus O’Donnell, the former civil service head, the government’s ‘exam addiction’ is ‘fuelling stress, anxiety and failure,’ signalling the urgent need for reform.

In terms of implementing such reform, the UK should perhaps appraise assessment systems across the global landscape. Schools in Finland, for example, operate with no mandated standardised testing, yet in 2018 achieved a PISA (The Programme for International Student Assessment) ranking of sixth place for reading literacy. Meanwhile, it maintains a score of 7.61 out of 10 for life satisfaction, rendering it the only country ranking exceptionally in both academics and wellbeing. This proficiency is achieved through higher teaching standards, with every teacher requiring a masters degree, and prioritisation of learning over examination, with a disregard for comparison and inter school competition. Within the UK’s own assessment infrastructure, methods such as CAT tests, which measure potential rather than sporadic performance, coursework tasks, and consideration of classwork or lighter termly rather than end of year exams could also galvanise a more equal, efficient and wellbeing focused assessment system, set in manageable chunks, rather than an avalanche at the end of the year.

Fundamentally, the standardised examination system in the UK is outdated. It blocks curiosity and personal fulfilment from taking centre stage and pushes mental wellbeing into the shadows, instead focusing the spotlight on grades. Education is the route to sparking the futures of the next generation, and painting a landscape of inclusivity, sustainability and progression – but schools must provide the paint brushes.