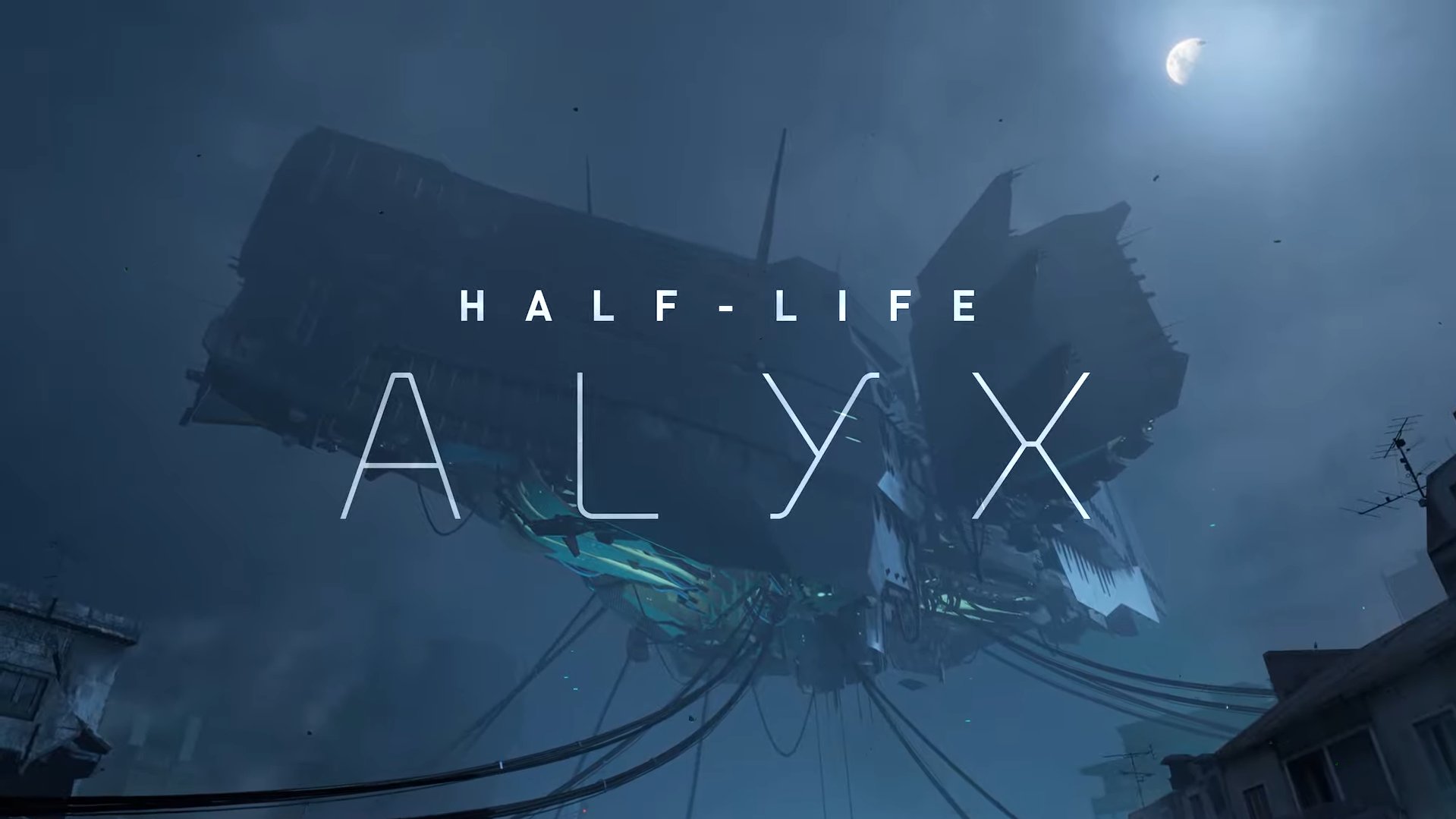 Gaming Writer Kieren Platts delves into the latest (and long overdue) entry in Valve’s flagship series with Half-Life: Alyx to see what it brings to the medium of Virtual Reality

Kieren Platts
Huge loser, passionate about computer games and audio dramas, lives with three beautiful housemates who don't want to talk about either.
Published at 12:00 on 2 May 2020
Images by Valve Corporation

One thing unites the Half-Life games – they exist to prove what new tech can do. Yet, that motive is hidden under a thoroughly entertaining narrative and game-centric experience. In short, Half-Life exists to display technology, and the technology is fully dedicated to Half-Life. It’s a symbiosis that so far has propelled the series to fame. There isn’t a single game that comes close to being as anticipated as the next Half-Life game, so, with that in mind, how well does Half-Life: Alyx perform?

Before getting into the game proper, it’s important to note control schemes.

When launching the game, the first thing you’ll notice is you need to get the controls right. Half-Life: Alyx is virtual reality exclusive, as it will soon justify, but this means the settings need to be broad. Apart from dominant hand selection and graphical capabilities, Valve offers a wide range of accessibility options specifically regarding movement. As someone who suffers from no motion sickness whatsoever, I was perfectly happy with continuous movement with smooth turning – the movement system most FPS games use – but snap-turning, a variety of teleportation options, as well as configurations for single controller schemes and seated players are available. Fine-tuning to your preference may take a couple of minutes, but once you’ve sorted out how you want the game to play, you’re ready to play it.

Half-Life: Alyx requires tracked controllers, such as the Valve Index Controllers or HTC Vive Wands, and wastes absolutely no time getting you to grips with how you’ll be using them. As soon as you’re in, following in Half-Life 2’s footsteps, there are hundreds of objects to pick up and interact with, whether you’re tuning a radio, smashing glass bottles, spinning globes, writing on whiteboards – it’s not a stretch to say that most of the enjoyment you’ll get from Alyx is in simply interacting with the world. This is in thanks in no small part to Valve getting your hands exactly right. The Gravity Gloves (or, the “Russells”) are the perfect logical system for integrating your hand movements into your virtual environment. They’re also the majority of the gameplay. The Gravity Gun in Half-Life 2 existed to provide long-distance interaction with objects in a 3D engine, but is optimised for a mouse. Right click to pull, left click to push. With tracked controllers, however, your hand IS the controller. In addition to regular hand movements (grabbing, throwing, pulling triggers, etc), the Gravity Gloves allow you to flick your wrist to pull objects in from afar, including, crucially, ammunition clips and magazines for your guns, and resin for upgrading. It is unproportionally fun to sling distant objects towards you, and catching said object in triumph. With the gloves, every loose object in the game becomes your personal yoyo, allowing for some of the most fluid interaction in a computer game possible.

Of course, everything in the game is optimised around the gloves. Your HUD is simplified as a tiny digital display on your non-dominant hand, so your health, ammunition and resin count is always accessible. Your inventory is located over your shoulder as a backpack, so any ammunition or resin you collect for later can be stored simply by dropping it over your shoulder. Yes, dropping the object with your hands. It’s difficult to explain how fun the novelty of that alone is, but rest assured that the fun is indeed there. Equally, your weapons are easily swappable, a nifty management system locked onto your dominant hand. On the Index, lightly pressing the top of the controller puts your right hand in selection mode, and you merely move your hand to whichever weapon you want on the go. It’s fast paced and easy to swap between your arsenal, never taking up more than a second of time. It also reduces pause time – your inventory is simplified, and you’ll only take a break from the action in the form of a menu should you specifically choose to do so. It’s just you, inside the game’s world, no distractions, no faffing.

Playing with the weapons themselves is an absolute joy. Your base weapon, depending on what it is, will require its own manual reload. The starting pistol, for example, requires a tap of the empty magazine “eject” button, for you to pull out a magazine from your backpack (context dependent – you’ll never, ever pull an item out from your backpack that you don’t want at the time), push it into the gun, turn off the safety with another button press, and you’re ready to start firing. It’s intuitive, it’s simple, yet it’s complex enough as a process that the act of reloading is by itself enjoyable. I shall repeat that. Valve made reloading a gun a fun activity. And that’s even without the rush of adrenaline, when you’ll be placed in situations that you’ll need to reload in – fast. The power-rush of taking physical cover by crouching behind a knee-height chunk of wall, reloading in what feels like one slick movement, and poking your head and arm out to take pot shots at a Combine solider, flicking distant ammo clips towards you so you can just barely keep shooting – personally speaking, I’ve never had more fun in a computer game. The comparable experience is picking up a Wii controller in 2006 and swinging it to make your tennis racquet work, but in Alyx the stakes are higher, the quality higher, the situation and action far more visceral, and it frankly feels amazing. Truly remarkable.

This is the bulk of Half-Life: Alyx, and it would absolutely be wrong to call it gimmicky. Crouching down to enter low doorways, physically covering your mouth to protect yourself from gas clouds, reloading your gun, aren’t just novel. They are intrinsically fun, they are convenient, and are genuinely a better way to play a computer game that with a mouse and keyboard, or controller, or whatever you want. Valve has put in a lot of work to not only make VR fun and accessible, but have fundamentally created a better way to play first-person games than what we had already. It changes how you treat your virtual surroundings, it changes how you view your environment, and it changes how you play for the better.

Of course, performance-wise, your experience with VR will depend on which headset you have access to. On the Valve Index, Alyx at low settings alone is pure eye candy, and first-generation headsets like the Oculus Rift display similarly astounding images. It would be wrong to call Alyx photorealistic, but the art style does most of the heavy-lifting in its consistency. Even the people look convincing. Everything just fits together, is beautifully crafted, and its that consistency that can have you forgetting that you’re in your house hooked up to your PC. The audio design is phenomenal, with notable mentions in voice acting to Russell (Rhys Darby), with Ozioma Akagha and James Moses Black newly filling in the iconic roles of Alyx and Eli Vance respectively. Hearing Alyx’s voice as your own not once feels out of place, and it’s a joy to take this voiced character on her journey through City 17.

Speaking of journeys, without saying too much, the writing and overall story of Half-Life: Alyx are exactly what they should be – non-intrusive. The joy in this thing is in playing with it, and the writing team have done a fantastic job of a complimentary storyline that never takes over from the player’s own agency. Your hand is never held, but you never feel alone in the dark, and you always understand where it is your going, why Alyx is doing what she’s doing, all the while moving forward primarily because it is you who wants to keep moving. Half-Life, as always, continues to put its player first.

The latest Half-Life game is a virtual reality exclusive, and honestly, that’s a misleading approach. Half-Life: Alyx exists because VR allows it to. Without pushing the bar, a new entry in the series would have faded to mediocrity, and VR is the perfect technological resource for Valve to explore and take their games to the next level with. If Alyx is anything to go by, we’ll be looking at a rich selection of Valve-engineered ideas as virtual reality continues to expand, and the world should be excited. On their first attempt, Valve have produced a beautifully engaging piece of entertainment, and a new Half-Life entry to boot. It is not hyperbole to say that, once again, Valve proves that games do not get much better than this.

Check out other reviews as well as other pieces by Kieren below:

Keeping Up: An Introduction To Speedrunning