“Look around right now and see how many people have their eyes glued to their smartphones, then tell me that one day a relationship with a computer wouldn’t be feasible.” 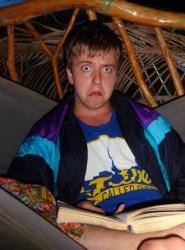 Blaise Radley
Vagabond with a penchant for the disorderly
Published at 16:39 on 9 April 2014

In Her Joaquin Phoenix plays an isolated man who falls in love with his new operating system, which isn’t a massive stretch of the imagination given that it’s voiced by the stunning Scarlett Johansson. The tale of a man finding love with a computer is one that has been tackled ever since the first inception of PCs, from John Hughes’ classic Weird Science, to Al Pacino’s not-so-classic role in S1m0ne. But this is a Spike Jonze film after all, so what follows is a remarkably human outlook on an issue that is only going to become more and more relevant, and though the concept may strike some as erring on pathetic, what unfolds is a surprisingly relatable story that really questions the concept of love.

The film places us into the futuristic but recognisable world (don’t go in expecting Blade Runner) of one Theodore Twombly, stuck in a job where he composes love letters for people who can’t voice their affections themselves, an art he has perfected even though his own love-life is somewhat dry. As an audience you’re dropped right in the middle of Jonze’s vision of the future, a place where the hipsters finally took over with nearly every character sporting high-waisted trousers, horn rimmed spectacles and a Burt Reynolds-esque moustache. If the satire seems heavy handed in writing, on screen it comes across wryly, provoking a few chuckles without trivialising the subject matter. This is the film where we finally see Jonze the auteur, and having found the narrative voice that was lacking in Where the Wild Things Are he is here firing on all cylinders, his direction and screenwriting barely missing a note. As a result, rather than coming across as lonely or desperate, Pheonix’s character is almost worryingly normal. He playfully disarms his colleagues, continually performs well at work and owns a large apartment with a stunning vista of LA; for all intents and purposes this is a man living the American dream.

Yet though it is never explicitly stated, there is a hollowness in Joaquin’s gait that tells all, a slight sadness in his eyes that subtly shows his disconnect from those around him. Jonze really pinpoints the main problem of the internet age; that as we become more and more technologically connected, so too do we lose sight of our more personal relationships. Is it really that much of a push to imagine people dating artificial intelligence in the years to come? Look around right now and see how many people have their eyes glued to their smartphones, then tell me that one day a relationship with a computer wouldn’t be feasible. This isn’t just satire, this is a realistic vision of our future that is both a little haunting and strangely reassuring. This isn’t just a film about dating a computer, this is a film about the way in which our relationships with technology will adapt over time, relationships that are only going to evolve as A.I.s gets closer and closer to human levels of empathy; think Siri on steroids.

The film’s more out-there ideas are carried by the way in which Johansson embodies the role of the operating system; almost child-like in curiosity she adapts herself around Theodore’s way of life, suiting his every need, before developing into her own being. Phoenix’s descent into robosexuality rarely comes into question thanks to her performance and the surrounding cast’s acceptance of his unconventional relationship. At its most basic level this is a story about finding love regardless of adversity (even if that adversity is one partner lacking a body), their romance leading to some genuinely touching moments and rarely feeling forced. Surprisingly their relationship struck me as remarkably organic, never truly resting in one place, never truly being pigeonholed. This is not some Hollywood cheese-fest concerned with soul mates or true love, this is an honest insight into finding love in the most unlikely of places.

In short, Her is an outstanding work of art but also somewhat paradoxical in nature, a film dealing with the near future that’s not overtly concerned with the construction of a futuristic landscape. Sure we see a slightly more sprawling Los Angeles, holographic video-games and obviously an A.I. capable of learning and adapting its very nature, but all of this is subtle, Spike Jonze doing a fantastic job of not force feeding the audience every last titbit of information. Where Her succeeds is its two fantastic leads actors, and in focussing on its emotional core rather than the superficial technology surrounding it, making what may at first strike you as high concept guff one of the most remarkably human films in recent years.

Nine out of Ten