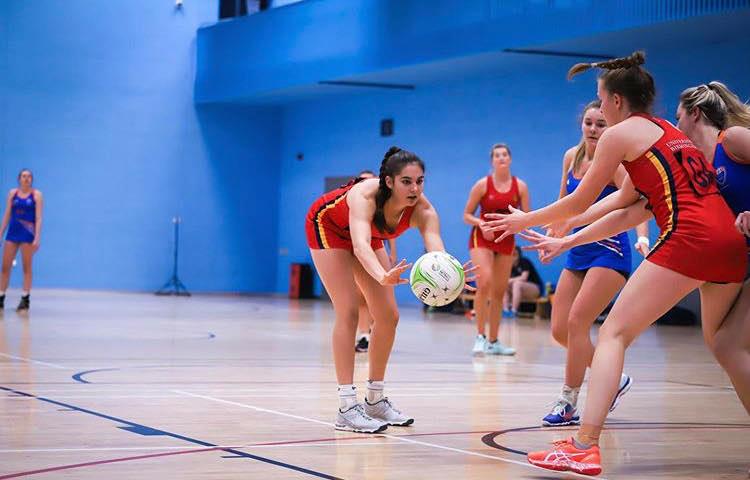 Written by Jack Wooldridge
Published at 14:18 on 24 February 2020
Images by Instagram@uob_netball

The netball first team face a championship quarter-final game against either Leeds Beckett or Gloucestershire on the 26th February in the sport’s showcase event: Intercept. This is the fourth event in UBSport’s Super-Series following Xplosion, Uproar, and Engage.

I sat down with Ellie Rattu, co-captain of the Netball firsts, to discuss all things netball and Intercept.

Rattu began by explaining the game. The aim is to outscore the opponent by throwing the ball into their hoop. The main rules are as follows: players are not allowed to move with the ball; players can only hold the ball for three seconds; the ball must be passed in each third before a shot can be taken; and it is non-contact.

The squad is in the Premier North, which, alongside the Premier South, is the top league at university level. There are six teams in each division that play each other twice before the two merge into the Championship, which determines the best netball team in England. ‘The Championship is the one everyone is trying to be in,’ explained Rattu, the Wasps Under-21 centre.

Despite losing out in the final to Hertfordshire, the 2018/19 season was one to remember. The team won the Premier North and made it all the way to the final, defeating strong sides – such as Bath – in the process. ‘I think the fact we even made it to the final last year was a goal in itself,’ Rattu said, as she reflected on last year’s experience in the Championship.

This time around, they aim to go one step further and claim the title. The co-captain said, ‘Now we know we can hold our own and be close, we want to push on and win it this year.’ The team has been in excellent form this season, winning all ten league games. When asked for the reason for their success, Rattu revealed, ‘we are a lot stronger than we were last year.’ Winning the competition is a realistic ambition for the UoB’s 2018/19 team of the year.

The journey to the final starts with Intercept and a quarter-final tie against either Gloucestershire or Leeds Beckett (who, at time of writing, are yet to play). Intercept will take place on Wednesday 26th February at 7pm in front of a packed-out crowd at the Munrow Arena.

In addition to this exciting game, the spectators can expect a variety of food stalls, raffle prizes and music to keep them entertained. Those watching will also be treated to a half-time performance from the Birmingham Pussycats (UoB’s cheerleading squad). ‘We love that it’s being showcased and that it’s being advertised across the university so that everyone knows about it. It should be really fun not just to watch the game but the whole environment and everything that’s going on around us,’ said Rattu.

Focusing on the game, it is one that the team cannot afford to lose but one they should win comfortably. Rattu agreed that it was ‘really important’ that the team stays focused and deals with the added pressure. ‘Our job is to go and win, and hopefully win by a lot and practice all the things that we have done throughout the season regardless of what’s going on around us.’

The team are favourites after winning the league and, as they will be facing a lower-ranked side, Rattu’s confidence in her team’s ability to progress stood out throughout the interview: ‘We are fairly confident – we know our ability.’

Fran Williams (left), who plays in goal defence, is one netballer to look out for at Intercept. She has been in the England setup for the last two years. Although she has been away for most of the league campaign, she has returned for the knockout stages and will look to drive the team forward. Playing in goal attack, England Under-21 netballer Kira Rothwell will be amongst the goals – another player to keep an eye on.

We also discussed the development of Netball as a professional sport. Since England won the gold medal at the Commonwealth Games in 2018, there has seen a spike in participation figures and a rise in the game’s reputation. ‘For netball even to be mentioned and recognised globally is amazing,’ said the 19-year-old.

Rattu declared that the fact that becoming professional, which would have been unheard of ten years ago, is now an option is ‘incredible’. Rattu can now dream of making netball her job and hopes to acquire England caps in the future.

She also encourages anyone inspired by the forthcoming event to get involved in netball at the university with ‘so many different things going on’ from playing in BUCS competitions to playing casually in the Campus League.

For now, Rattu’s focus remains on leading the university’s netball team to victory, beginning with Intercept at the end of the month. It will be an exciting occasion where we can expect to be entertained both on and off the court.

Intercept begins at 7:00pm on Wednesday 26th February. Entry for the evening is free