An Interview with Lucy Porter 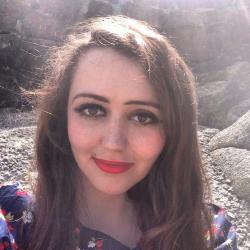 Paige Tracey
Liberal Arts and Sciences student at the uni, second year. Currently planning to major in either English Literature or Philosophy; leaning more towards the latter. Write mainly about music. I ate a bagel once.
Published at 10:00 on 22 September 2016
Images by The Old REP Theatre Birmingham

A favourite on the bread and butter programming of British television, Lucy Porter has had a pretty packed career to date. The 4 ft 11 comedienne, who originally began work as a journalist, has graced our screens with appearances on Never Mind The Buzzcocks, Have I Got News For You, Mock The Week and QI. She was also a regular warm up act for television series screenings of The Mitchell and Webb Look at the BBC Television Centre. “My favourite TV appearance to date, however would have to have been when I won Celebrity Mastermind,” Lucy tells me. “Sitting in the big chair, with John Humphries giving me his best stare was an incredible experience. I won with my specialist subject, the Life and Works of Steve Martin. I did originally want to do British Confectionery of the late 20th/early 21st century, but they wouldn’t let me have that one! Sweets and quizzes are my biggest passions, other than comedy; I’m a complete pub quiz nerd.” She laughs as I make my own, frail attempt at being a comedian, telling her she is “very sweet” as she describes how she hands out confectionery to the audience at her shows.

Despite being married with two children, Lucy’s excitable personality indicates she is never too far from her inner child herself. “Having children has definitely made me more confident on stage,” she exclaims, “once you’ve been through childbirth, everything else is a doddle!” This new-found confidence seems to be a far cry from the person Lucy was when she first began her comedy career, while working in her new job upon graduating from the University of Manchester. “I’d always been interested in comedy, but was never quite sure how to go about it. I wanted to be a really serious journalist, like a war correspondent for the BBC. However every time I wrote something serious, people would just find it funny! In virtue of not being taken seriously, I thought I’d give comedy a try.” She describes how she selected a venue far enough away from her home in Manchester, so that if her first gig was really awful, no one she knew would be there to witness it. “I went to the student comedy club in Chester. It’s where comedians such as Peter Kay and Johnny Vegas began their careers. They had these “comedy police” there, who came onto the stage making a “woo woo” sound, and walked you off if your act was terrible. I wasn’t “woo wooed” though, and I actually missed the last train back to Manchester because I was celebrating so much. The gig went that well! Stand up is addictive – once you do it, you then want to keep on doing gigs. I began to do more shows, trying new material and finding out what my comedy voice was. Eventually I got a show together to perform at the Edinburgh Fringe Festival back in 2001. That was an amazing experience; I love the festival so much. It’s just like being back at university when you are there. No one is taking themselves too seriously.”

Upon her comedy voice, Lucy states that her comedy is “very chatty and conversation based. I do a little bit of politics, a little bit of observational stuff, but mostly it’s just anecdotes from my life. Annoying things that my husband does is a recurring theme! That’s one of the things I love about stand-up; I change my routine quite a lot, and every show is different dependent on what arena I am in.”

Lucy brings her new comedy show, Consequences, to the Birmingham Old Rep Theatre on 27th January 2017. “If you come along, there will definitely be some sweets!” she retorts. “In all seriousness, I want to say to the students at the University of Birmingham, keep doing what you are doing. You are at one of the finest institutions in the country, and it was always a favourite venue of mine to perform at when I toured on the university gig circuit. It has a beautiful campus, but also plenty of crazy students! I’d love as many of them as possible to come and see me live.”

In terms of future plans, Lucy believes that in addition to her stand up tours, her destiny lies in writing comedy scripts for other people. “I’ve just written a sitcom that’s going to be aired on Radio 4. You see, the problem with appearing on television is that you get recognized. I’m not even that comfortable with the small amount of fame I have now! Working behind the scenes, and producing material for excellent actors and actresses is the kind of project I now enjoy the most. Of course I will be on your TV screens again in the future. However, it is performing on stage and writing where I feel most free as a comedian.”