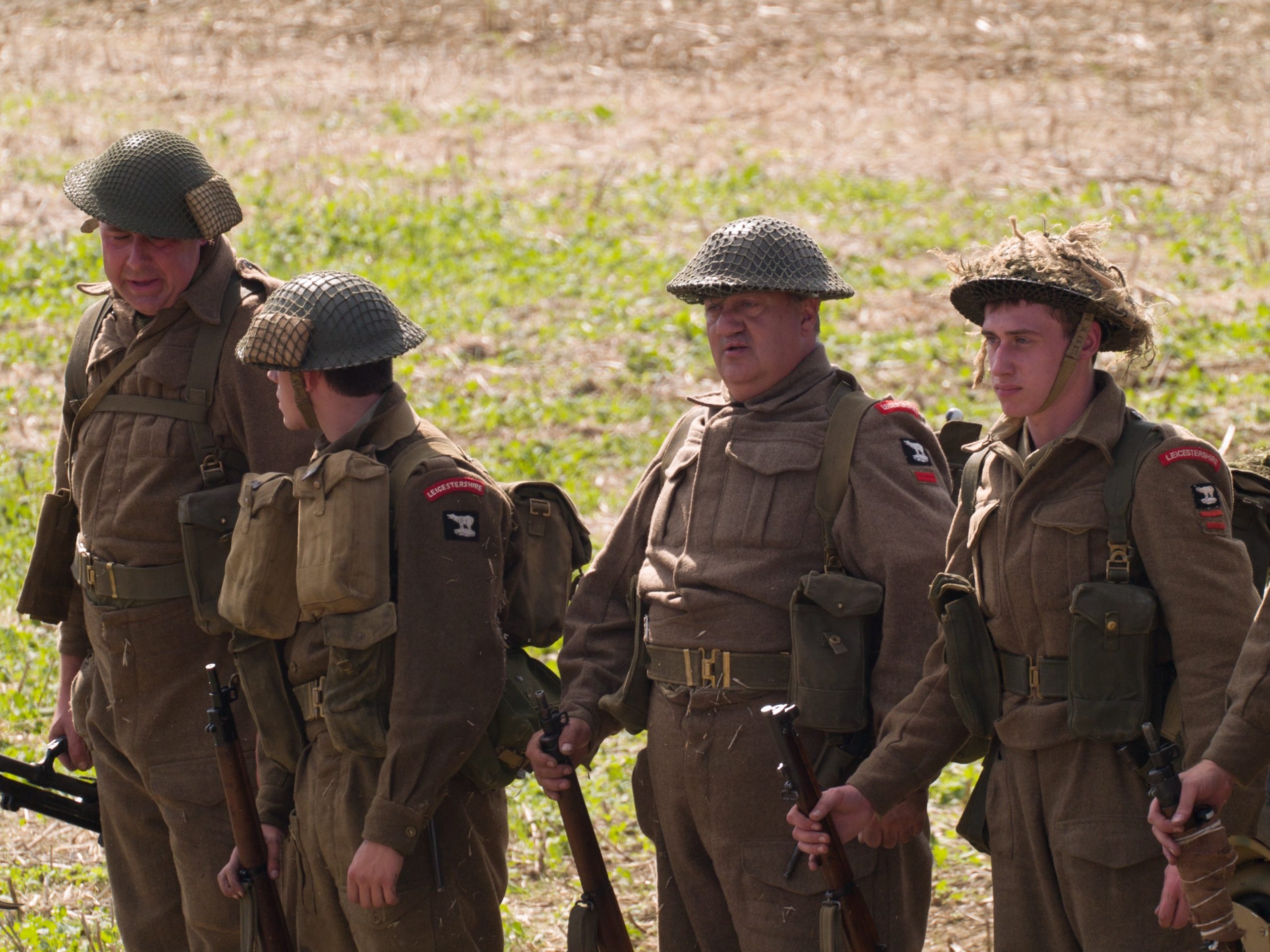 Interviews: Why Do People Participate in 1940’s Re-enactment?

Written by charisGambon
Published at 09:00 on 15 June 2022
Images by Photo by Paul Rowland on Pexels

The 1940’s reenactment scene is certainly a vastly popular scene. This year I managed to attend my first 1940’s reenactment events which I thoroughly enjoyed. I enjoy the 1940’s events because participating provides me with a chance to tell the story of women in WWII. I choose to portray the Women’s Auxiliary Airforce and I am truly honoured to be able to play a small part in ensuring the story of these hardworking women survives.

I study MA history of Warfare at the University of Birmingham and specialise in women and war; WWII reenactment provides me with the perfect opportunity to educate the public about the often hidden contributions of women during wartime. I find it absolutely amazing that through 1940’s reenactment I have been able to find friends with whom I share this enthusiasm for ensuring the story of the Royal Airforce is accessible to others.

There are others who share my passion for 1940’s events and reenactment who all have their own reasoning for choosing to participate. I have been able to discuss this reasoning with a small selection of participants in the community. The 1940’s events are able to continue and flourish due to the commitment and dedication of those who participate to reserve the era. I shall share the variety of reasons I have been able to gather within this piece.

Arthur Eschenburg stated: “So, for me, it’s because WWII was always on the history channel growing up and once I discovered that WWII reenacting was a thing, I dove right in to get a better idea of the culture, tactics, and persona of the decade. It’s given me a better idea of what the greatest generation went through when my country went to war without the same technology that we have today.” Arthur’s reasoning for why he participates in 1940’s events and reenactment is a fairly common reason. As Arthur suggests, reenactment and living history provide opportunities to form a closer idea of what our ancestors would have gone through.

Laura Wilson discussed that she became involved “because of my 12-year-old daughter, she felt inspired by VE day on lockdown!” It is certainly outstanding that such a young person would want to be involved in remembering the contributions of individuals within WWII.  Capturing the interest of young people also means that there is hope for the future of 1940’s events.

Felicity Rackstraw stated: “I sort of drifted into it. I got invited to Goodwood Revival back in 2005, and it kind of grew from there!” Felicity is a seamstress who has been making her own clothes for quite a while stating that “it wasn’t a hard thing to hop from making my own Victoriana style goth clothes to making vintage clothing from other eras. And then people started wanting stuff that I was making so I set up my business in 2015 after I left my career in law.” The WWII community is a fairly welcoming community and there is always room for new people to join. Seamstresses are valued within the community as it is important to wear period-correct clothing.

Bev Spink stated that “My sister-in-law and myself used to take our grandchildren to the BCLM and they had toys of the 1940’s and would talk to the children who came about the toys and about being a child during the war and we would talk about being housewives.’’ 1940’s events are a great opportunity for the young and the old to join together to remember. Events have aspects for children as well as adults and engaging young children in history is vital for ensuring there will be a future in remembering WW2.

John Knowles commented: “I’ve always been interested in history; my parents grew up during the war (Dad left school to work on a farm before starting his apprenticeship). I started to collect regimental badges as a teenager and currently am a member of Wiltshire Home Guard Living History Group.”  Many people who choose to reenact as adults possessed an interest in history as a young person. The ability to expand on a lifelong interest is an important aspect of the community, and the underlaying interest is what holds the events together.

Ruth Mashiter commented that “for me, I really enjoy meeting the general public and listening to their stories. I have a toy display and seeing the faces of our more senior guests light up when they spot something they played with as a child is just wonderful. Often, they have grandchildren or great grandchildren with them and it sparks memories that they then share.’’ Being able to play a part in telling the story of others will always be such a privilege for 1940’s reenactors. It is always an honour when someone chooses to share with you their personal story. Sharing stories creates such a special connection that is not possible to get in many situations.

Jimbob Mitchell stated that “When I was a child I was drawn to military history with tales of Dunkirk and Waterloo and enjoyed going to different events as a spectator with my dad… but never knew I could do it myself! Then, at the age of 12, my two older brothers and the then group leader of 20cr (20th century revisited) took me to SOF (soldier of fortune) when we got out the car and at the front door of the shop my group leader said “congratulations you’re in”. My first bit of equipment I bought was an m1 Garand belt which I still have to date as I grew older and found my niche – high attention to detail in medical and squad support. And to date, I still like to read the odd diary and manual to find conflicting information.” For many people, being able to build upon a fascination that started in childhood is the starting point for joining reenactment. Once you have brought that first piece of kit you are hooked and you will always be looking for new pieces and ways to improve. Finding what interests you is one of the most important aspects as it means you will want to conduct the research.

Matthew Parker suggests that “The 1940s scene is, without doubt, one of the most diverse aspects of contemporary British living history.” Diversity means that there is a place for every individual who is interested in becoming a part of the 1940’s community and means that it is always welcoming to new people.  Diversity occurs in the community both in the sense of the background of those who participate and in the range of roles that are chosen to be portrayed. There is always something new you can learn.

One of the most common reasons for choosing to participate in 1940’s events and reenactment is a family connection. Individuals feel like they can feel connected to their ancestors through researching and portraying the wartime role carried out by them. They often also view it as a way to respect and honour their contribution to war.

Kiel Almond stated that “one of my ancestors was killed flying in a Lanc in ww2. It’s one of the reasons I do RAF to commemorate him and many others of RAF bomber command that didn’t return. He flew with Dominion aircrew (Australian and Canadian) which has led me down a rabbit hole of other impressions. I have also been involved with GHQ Auxiliary units due to family connections and For this, I live telling the story of the secret war, SOE, signals and cyphers as this this is an aspect of the war that, due to its secrecy, went largely forgotten.’’

Another individual who chooses to honour and remember their relatives through 1940’s events is Alexander Hardisty. Alexander stated that “My grandfather served in Burma [during] WWII. And ever since he told me about his experiences, I’ve always had a vast interest.  So, after my grandfather passed away I started collecting kit (at this time I was unaware of re-enactment).  I went to a 1940’s event in Howarth when I was a young cadet [at]13 or 14. And I had an idea to do a Bruma impression in memory of my grandfather.”

Mark Mckenzie also stated that he got into 1940’s events due to a family connection. Stating that “I am into family history so I represent a German family member in the war. They were a German policeman in France during the war. One of the reasons I portray him is to educate as most Brits have a blinkered view of Germans. While in France he used to treat those in his area of control very well, often letting the locals know beforehand when there was going to be a raid by the German army.” For Mark, 1940’s events and re-enactment allows him to ensure that incorrect viewpoints or opinions are corrected to ensure that the truest version of history can be remembered.

Nadine Williams also possessed a personal connection to 1940’s events and re-enactment. Nadine stated that “I have always loved history from when I was at school and we did a project on the two world wars. But really it was my grandad, he was in the Royal Fusiliers and served abroad right until the end of the war. I found it fascinating and he used to talk about it and told us a few stories.’’ When you are interested in history you are more likely to listen to family stories from the past, and in turn these stories will further fuel your interest in history.

Nadine added that “My Nan was a farmer’s wife and was in the WI (women’s institute) and helped with the war effort through them. I am proud to say I am now in The Victory Belles WI and we are the only true 1940s style WI in the country. It’s nice to think I have followed in my nan’s footsteps.” Nadine, like many other 1940’s reenactors, found her calling in a specific impression due to wanting to tell the story of her ancestor which will strike passion within and a strong desire to ensure that the story is not lost to time.

Valerie Boxley suggested that “We take part in reenactments not to glorify war but to honour a valiant generation who held the line and who would ‘never surrender’ and to whom we owe so much.”  This is a noble reason to become involved in 1940’s events and reenactment. When individuals remember that events are created for remembering the contributions to WWII this is when they are at their best. Choosing to reenact a specific individual or impression should be to remember their strong commitment and resilience.

What is Reenactment and Why Do People Do It?