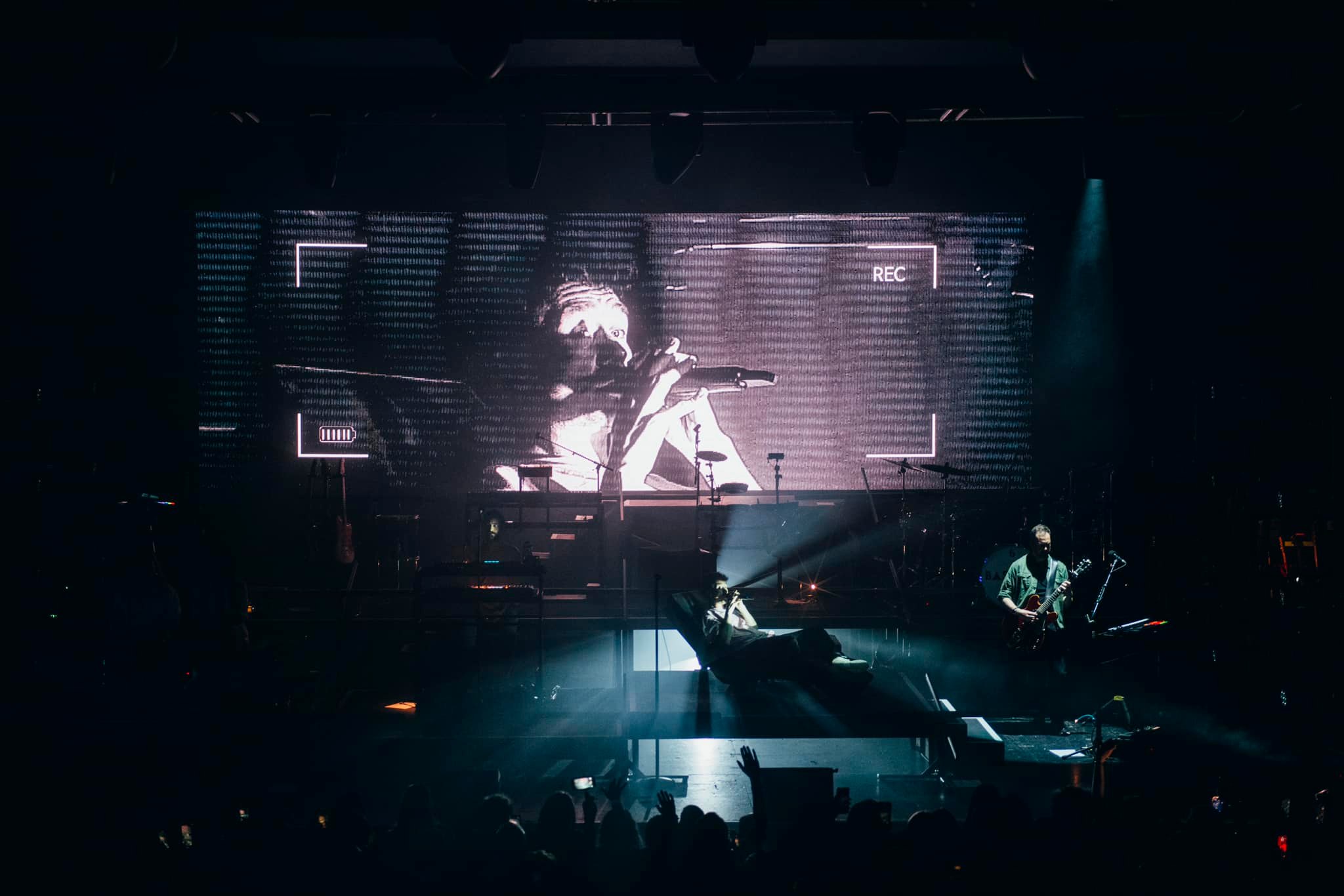 Bastille came to Birmingham for two nights to play at the O2 Academy on the 14th and 15th of April as part of their Give Me The Future tour in support of their album of the same name that was released in February. The record saw the band step away from their first three in some ways and was more electronic and based around the themes of the future, escapism, technology, and pop culture. Just as the album delivered excitement and fun, the show was an exciting spectacle which developed the record into a full experience.

As well as putting on an extensive show themselves Bastille were supported by two very enjoyable acts. Indie band The Native gave a charismatic performance of guitar anthems that were extremely polished which I particularly enjoyed. The second opening act was Dylan, a singer in her earlier twenties who has already supported the likes of Ed Sheeran. Joined on stage by a guitarist and a drummer she excited the crowd with her own fun and lively tracks and covers of ‘I Kissed A Girl’ by Katy Perry and ‘Paradise City’ by Guns N’ Roses which made her really interesting to watch.

When Bastille came on they started with ‘Stay Awake?’ and ‘Distorted Light Beam,’ two archetypal tracks from Give Me The Future. Both upbeat, energetic songs set the bar for the show with the varying futuristic sounds, entertaining effects and Dan Smith’s enthralling voice showing early on Bastille’s live abilities and the crowd’s adoration of their music.

Although the songs on Give Me The Future deviate slightly from the sound of Bastille’s previous albums, the setlist, which had songs from all stages of their career, felt seamless and perfectly constructed. This was demonstrated by the next songs they played: ‘Things We Lost in the Fire’ and ‘Laura Palmer,’ both of which are from their 2013 debut album Bad Blood. They fit perfectly alongside the first two tracks due to Bastille’s talent and creativity which runs throughout all their work. More approval came from the crowd who could be heard shouting the words and beamed with excitement from the first notes. The same was true for ‘Of the Night,’ another early song which is a mashup of ‘The Rhythm of the Night’ by Corona and ‘Rhythm Is a Dancer’ by Snap!.

During the lively setlist, there were more downtempo moments which stood out. Smith sang ‘Oblivion,’ another song from Bad Blood, with just a piano as well as the crowd while led on a chaise longue which came as a big change after the energy of the first four songs. They then played ‘Those Nights’ which had more instruments and was a bit more upbeat but still had a similar feeling of intimacy. ‘4AM’ and ‘No Bad Days’ had a similar effect later in the show and it was during these more simplistic songs that Smith’s haunting and vulnerable but powerful voice could be fully appreciated.

Two of the best songs that Bastille played were ‘Quarter Past Midnight’ and ‘Good Grief’ which were singles from their previous two albums. Both songs are great examples of Bastille’s sound being upbeat with high tempo drums and big choruses but with quite sad lyrics. They seemed to be two of the crowd’s favourites with them frantically jumping and singing along, especially to the ‘Watching through my fingers’ parts in ‘Good Grief.’

The show was made even more enjoyable by the whole experience that it offered. Before the band came out and between the songs, futuristic videos were played which talked about a virtual reality called ‘the innerverse.’ The visuals alongside the music felt immersive and made it feel, in some ways, like being at the cinema as well as a concert. Onstage there were crosses which lit up in different patterns and the erratic and multi-coloured lights also helped bring the mood of the album to life.

The balance between older songs and the new album was one of the best things about the show. Playing a long setlist of 23 songs allowed them to play all but two tracks from Give Me The Future and a lot of the hits that the older fans wanted to hear. The song from the new album Smtih said was the band’s favourite was ‘Back To The Future.’ Named after the classic film it is full of references to books and other films which make it a really fun song. The two backing singers sang the song (and some of the others) at the front with Smith which made it more interesting and put more attention on their impressive voices. One of them was BIM who was featured on the hopeful closing track on the album ‘Future Holds’ which they performed towards the end of the set.

After ‘Back to the Future’ they played ‘WHAT YOU GONNA DO???’ which is a more rocky song compared to their usual more synth-based music. The studio version features Graham Coxon from Blur on guitar but the band’s touring member Charlie Barnes took his place. Barnes eagerly ran around the stage and stopped to sing with Smith who also picked up a guitar (which restricted the exuberant dancing and jumping around he was doing all night). It was exciting to see the band play a heavier song and it really suited them, especially Dan Smith’s voice.

One of Bastille’s biggest songs is ‘Happier’ which was a collaboration with DJ Marshmello. The track was a lively one for the crowd and was made even more so by Dan getting in amongst them to sing it. He walked through the crowd to the back of the room and up to the balcony before ending up back on stage (after stopping to dance a few times). This moment sent the fans wild and was a great spectacle to watch. They similarly enjoyed the next song they played which was their new single ‘Run Into Trouble,’ another dance track which is with Alok.

Before the encore Bastille played their breakout song ‘Pompeii’ which was one of the bests moments of the night. It was clearly the one that everyone had been waiting for. Everyone in the room knew the words and was excitedly singing along, especially in the chorus.

After they came back out after the encore and played an unreleased song called ‘Hope For The Future’ which was another slower, more reserved track that even had drummer Chris ‘Woody’ Wood playing the guitar. Bastille finished the set with ‘Shut Off The Lights.’ Being an exciting, fun song like ‘Pompeii’ it captured the mood of the whole show perfectly with Dan Smith getting the crowd to shout the chorus ‘Shut off the lights, we don’t need them to dance.’

From start to finish Bastille were captivating and put on a show that was amazing to watch. The mixture of their new futuristic themed songs from Give Me The Future combined with their material from their first three albums showed off the extent of the band’s creativity and their ability to consistently make great songs. This was affirmed by the adoring crowd who showed their love of the band during every song by wildly dancing and singing along. The way Bastille encouraged them to sing along and moments like when Dan got into the crowd put more emphasis on their special connection with their fans that was already on show. The effort they clearly put into every song and the length of the set that they played showed their appreciation of it. The band’s gratitude to their young support acts made their inclusive attitude even more obvious. On top of how great the music was, the album-themed videos and other stage effects made the performance even more entertaining. The whole show together was extremely enjoyable, especially in a more intimate venue like the O2 Academy where all of it could be experienced at close range compared to the arenas that the band deservedly played in other cities.

Album Review: Bastille – Give Me The Future