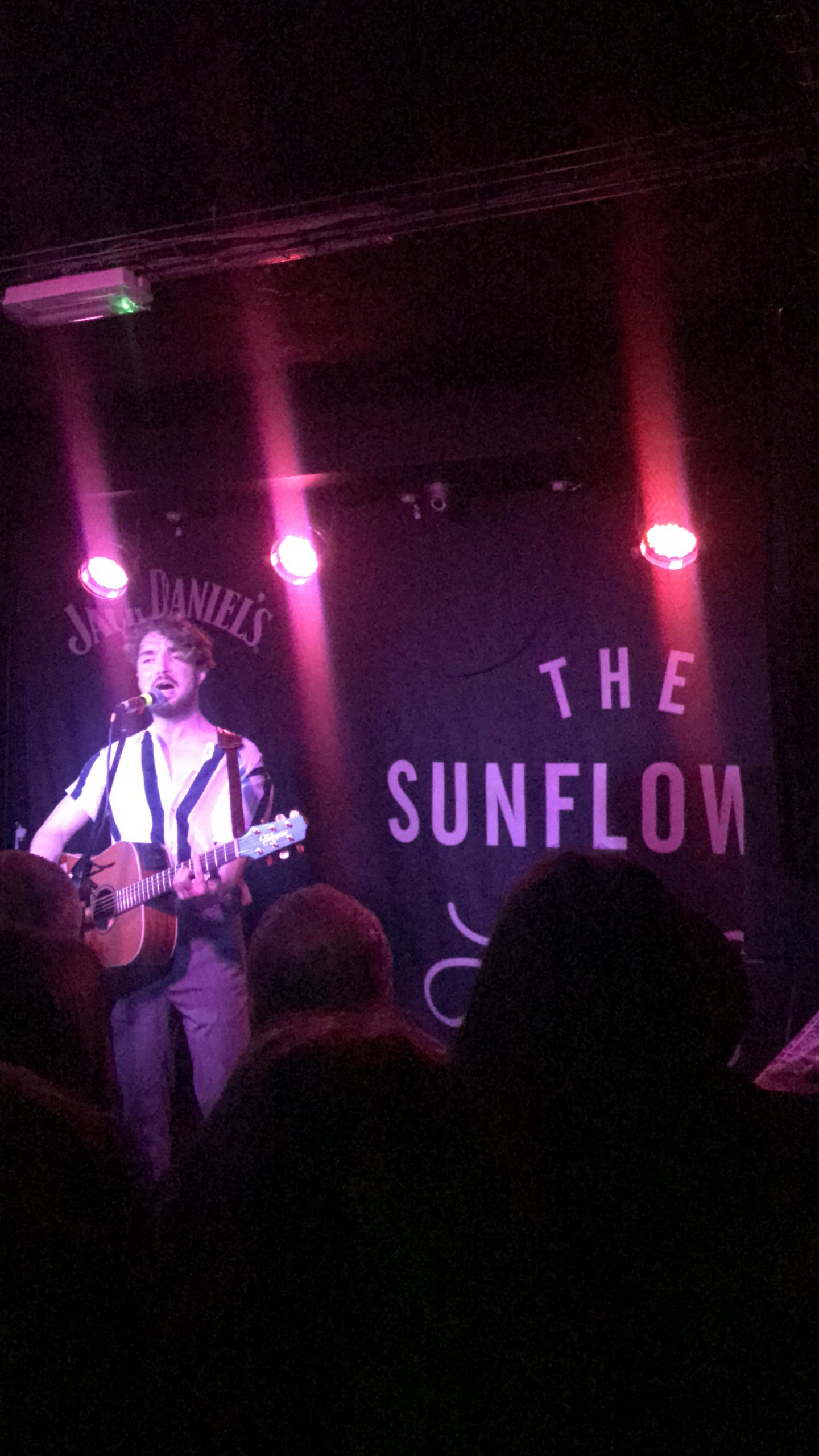 Music Editor Bethany-Jo O’Neill reviews David Keenan at The Sunflower Lounge, and urges others to keep an eye out for his future tours

After navigating the labyrinth that is The Sunflower Lounge, I finally realised I was in the right place by spotting David Keenan himself drinking in the bar and mingling with his fans – a very wholesome sight. Downstairs below the bar, the crowd were being warmed up by the fabulous Dune Boy and Conor O’Rourke. Both had tremendous acoustic skill and the audience thoroughly enjoyed their performances.

The type of music that Keenan makes clearly appeals to a wide demographic, as the crowd was very mixed with people of all ages and personalities. What was lovely to see was that both support acts and their friends stayed until the end of the night to see the whole of Keenan’s extraordinary performance – Keenan thanked them for this support later in the night.

To enter the stage, David Keenan had to make his way through the crowd from the back of the room which is something I personally have never seen at a gig before so it was very novel! Due to the intimacy of the venue, the singer was able to converse with the crowd and build a rapport which worked greatly in his favour for the rest of the night. Keenan himself commented that the venue was ‘cosy,’ which it certainly was, but this was in no way a bad thing and, in fact, was perfect for an acoustic show of this type.

Keenan prides himself on his connection with the art of poetry. This, combined with his beautiful vocals and amazing range, made him a presence that was incredible to behold. There is something about Irish vocals that is so distinctive in how the trills and improv flow effortlessly and sound flawless. This was evident in Keenan’s first song of the night, ‘Big Boys’. It was impressive that with his first song, the singer got everyone in the crowd to sing along, even if they didn’t all know the words. This rapport that I already mentioned created an atmosphere typical of a jovial Irish pub which was a great vibe to be a part of.

As well as a friendly rapport with the audience, David Keenan completely commanded the room – there was pin-drop silence throughout the Sunflower Lounge in the moments where he stopped playing and singing momentarily in the middle of a song. This kind of attention was goose-bump rendering as you could tell Keenan had the audience in the palm of his hand. It was at this point in the night that Keenan exclaimed “I can’t see you but I can feel you” with regards to the audience which only worked to reinforce this community energy further. Later in the concert, he encouraged those gathered in the room before him to turn around and say hello to the person next to them which was a great way for the audience to feel as comfortable as Keenan himself appeared to be on the stage.

The next song that Keenan performed was ‘Sacred Cough Bottle’. Not only is this an excellent name for a song that discusses nothing of the sort, there was a sweet story that accompanied it. The title is in honour of his Grandfather who would try to cure all ailments with a concoction in the form of a sacred cough bottle. The meaning that the song title has transpired in the way Keenan performed the song – there is so much passion in his voice and it is evident that he truly thinks about every word he sings alongside the impact these words have. Further to this, Keenan and his guitar are the perfect duo; he is at one with the instrument and it is evident this is where he feels most comfortable.

Aside from Keenan’s phenomenal vocal talents, I loved hearing his captivating stories which acted as interludes between the tracks. The next of which was about his song, ‘The Heeling’. This track was inspired by his younger brother and what it is to be a young man. He praised the undeniable sense of female solidarity present in today’s society and suggested that men need to come together too, be there for one another and ‘hold each other’; a truly pertinent sentiment that should be listened to. The contrasting dynamics in this song are so interesting as the verses are full of passion and gut whereas the choruses are more reassuring, reminiscent of the way an older brother may interact with the younger. The end of Keenan’s performance of this track reminded me of ‘Zombie’ by The Cranberries; just as I thought I couldn’t love the song any more!

Before performing his track ‘Two Kids’, Keenan explained that he usually performs the song with Laura Quirk and that he would have to ‘channel the divine feminine to sing without her.’ Not only did Keenan do this himself, but there were some people in the audience who knew the words, so therefore sang them with beautiful voices that carried above the rest. Keenan recognised this and turned the microphone around to face the audience. The line “I taste laughter on your breath” really stood out to me when he sung it as it is such a beautiful and all sense consuming sentiment.

Keenan explained that ‘sometimes you have to go off and live to be able to write a song’ which is clear to see in his performance as he seems to draw on these experiences. He said recently in an interview with Redbrick that during the recording process for his debut album A Beginners Guide to Bravery he ‘had to re-enter or at least try to step into the same headspace that [he] was in when writing the tunes’ which makes me wonder whether he does something similar when performing his songs live. Even after the success of his debut album, Keenan wanted to reiterate that he intends to keep releasing new music regularly “or else he would implode”. Following from this, he announced that he would soon be releasing an EP called Alchemy & Prose. He hinted in our interview that he would be performing some tracks from this EP at The Sunflower Lounge, and he delivered. Introducing the song by stating “madness is passion”, he went on to sing ‘Bless the Mad Ones’ which was very well received by the audience.

The next two songs were clear fan favourites as they evoked cheers at the pure mention of their names. He started with ‘Altar Wine’ before asking the audience to “continue this collaboration” and clap to keep him in time for ‘Unholy Ghost’. A collaboration is what the night was as there was a real connection between everyone in the room.

For the last part of the evening, Keenan decided to take some requests as he explained that his set list was more of a reference point than a set list. Due to the enthusiasm of the audience, he relented and played three more songs rather than two. The first was ‘Snakes and Ladders’ where he replaced Bethlehem with Birmingham in the line ‘I think of nothing except Bethlehem and our immaculate conception,’ which was greeted with enormous cheers.

Keenan ended with the song ‘Subliminal Dublinia’. There was a note in this song that, for me, was the most impressive of the whole night and my reaction summed up my thoughts on the evening; jaw dropping. The audience sung the line ‘occupy the city with original ideas’ over the ending under Keenan’s instruction and it was a truly beautiful end to an outstanding night.

David Keenan is a talent to really keep an eye out for. He said himself that he wanted to do it all over again, (like the rest of the audience), and that he hopes to be back in Birmingham in November – which would be excellent to see. For an artist who likes to do things his own way, this was truly a show like none other I have seen before in terms of undeniable talent and connection with the audience. Bring on November!

Why not discover some new artists during lockdown? Check these out…