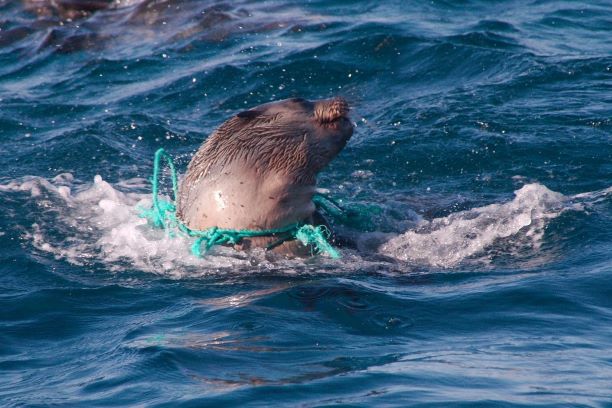 Marine Wildlife is Suffering at Our Hands

Written by DaniellaSouthin
Published at 14:30 on 21 July 2020
Images by Needpix.com

The abysmal state of our oceans is not news to many. From warming waters to coral bleaching, scientists and environmentalists are deeply concerned about the health of the oceans and all that lives beneath the surface. But it is what we, above the surface, are doing that is causing such great concern. Not only are we endangering marine wildlife through our consumption of fossil fuels, leading to oil spills and a warmer climate and ocean, but as is our consumption of plastic and disregard for animal safety out at sea.

Filicudi Wildlife Conservation bore witness to this when they spotted a sperm whale trapped in a fishing net off the coast the Lipari Island, Italy. For two hours, the whale lay helpless as the coastguard cut away at the ropes until it was freed. Although the incident was resolved, it sparks questions about the safety of our oceans for marine wildlife with the seas closer to home appearing no better. According to the 2019 State of Nature Report (SoNR) – a document examining the effects of human interference on the U.K’s environment – there is ‘an increasing number of cases of Humpback and Minke Whale entanglement off Scotland’.

Unsurprisingly, as we continue to dump our waste into rivers and oceans, the ‘ingestion of plastics by marine animals has been widely reported’ across the U.K, with microplastics being of particular concern. As defined by National Geographic, microplastics are ‘tiny plastic particles that result from both commercial product development and the breakdown of larger plastics.’ For a while now, ‘microplastics’ has been an environmental buzzword in the media; we’re accustomed to hearing it yet scarcely take notice. It’s time we do.
The statistics on Northern Fulmars – coastal birds who feed out at sea – might make us do just that. Since the 1970s, these birds have been ingesting plastics and it has only gotten worse. Back then, there were ‘fewer than 10 particles per bird’ but between 2010 and 2014 this rose to an ‘average of 33’. We can only hope 2020 statistics are lower, but the likelihood seems questionable since 93% of the researched Fulmars ‘had ingested some plastic’.

Birds such as these are not only endangered by the plastics we produce, but also by the methods we use to catch our fish. Bycatch – ‘the catching of non-target species’ – is of particular concern to Puffin and Shags, despite them already being ‘species of conservation concern.’ Unfortunately, bycatch is also devastating to cetaceans – mammals of the ocean – as according to the State of Nature report ‘roughly 1500 small cetaceans … are caught as bycatch each year.’ Porpoise, dolphins, and seals are all at risk because humanity is forever interfering with the natural world. Is any of our interference positive?
The UK is making attempts to reduce the bycatch of cetaceans however the State of Nature report still states that ‘bycatch of several species remain at levels of considerable conservation concern.’ Although changes are being made to the monitoring of our fisheries, modifications are improving our equipment and we are identifying effective mitigation processes, the impact does not appear enough. Our fisheries must not just be beneficial for ourselves, but they must adapt to lessen the weight of our impact on everything surrounding us.


So must our treatment of resources. In the western world, we produce, use, and throw away resources, which inevitably end up polluting our environment and wildlife. If we can lessen the production of new plastics, lessen our consumption of them and begin to reuse and recycle the plastics already washing up on beaches, littering our oceans, we can take them out of our environment and produce a circular economy where no resource is taken for granted.

While we wait for this circular economy to become a reality, many of us making our own small steps to reduce our waste by reusing so-called trash and refusing single-use plastics. There are also many charities and non-profits working to help our marine environment right now such as the Filicudi Wildlife Conservation, who spotted the trapped sperm whale in Italian waters. They are working to assess the ‘risk and interaction’ of ‘fishing activities’ with cetaceans, as well as monitor ‘possible environmental contaminants’ in cetaceans and loggerhead sea turtles. In the UK, the RSPB is also helping our marine and surrounding wildlife. By collaborating with fisheries, they are working to decrease the harm caused to birds through improved fishing activities, making them more ‘sensitive to the needs of the marine environment.’
Across the globe, work is being done to preserve and protect our marine environment and though the present is bleak, the future may hold a circular economy, improved fishing practices, oceans free of waste, and safe, thriving marine wildlife.

Like this article? See below for more from Sci & Tech: