Orange is the New Black: Worth The Hype?

It appeared from nowhere and it’s on everyone’s mind: is OINTB the new show to watch? 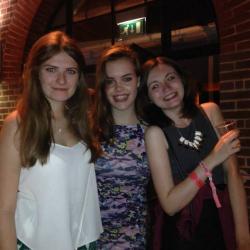 The chances are that, if you’ve read any magazine, you’re a member of any social networking site or even just spoken to your friends lately, you’ll have heard about Orange is the New Black. And people have been doing more than just talking about the show: everyone seems to be doing nothing but praising it. So, being constantly reminded of just how ‘amazing’ the show is, it’s hard to resist the temptation to get stuck into it yourself. But with so much focus on this new show, that has seemingly appeared out of nowhere and features a widely unknown cast, you might ask yourself: can Orange is the New Black really match up to the hype surrounding it?

In short, the answer is yes. The series follows Piper Chapman, a young, newly-engaged woman who finds herself sent to Litchfield Correctional Facility for women for a crime she committed years before. The show bases itself on the ups-and-downs of prison life – much like a cooler, American version of Bad Girls – including strict guards, disgusting food and the physical, verbal and physical fights between the inmates. And there are the lesbian scenes: for a small prison, Litchfield seems to have a surprising high number of lesbian characters and the show is never shy of including a few graphic sex scenes. One might see this as exploiting the tired stereotypes of prison, but OITNB takes on these stereotypes to add to its charm, going to places bigger shows may not dare to go and adding a comedic element to what could potentially be a bleak series. And, luckily, the show also breaks stereotypes. With OITNB, things aren’t as simple as ‘good’ and ‘bad’: police officers are corrupt and greedy, and prisoners are likeable and sweet. Each episode features the backstory of a different inmate, and we soon learn committing crime isn’t as simple as being a bad person.

These heart-warming characters are only made possible by an outstanding cast, even if you probably won’t have heard their names before. Top of the bill are Laverne Cox, playing the transgender character, Sophia, who creator Jenji Kohan described as a miracle find, due to being a real transgender person “who can actually act” (not to mention the fact she has a real-life twin brother to play the pre-transition Sophia!) and Natasha Lyonne who uses her own substance issues to translate to screen with her addict character Nicky Nichols.

Just from reading this review you’ll hopefully be able to spot just some of the little eccentricities and oddities that make OITNB  stand out from the crowd – this, combined with the basic principles of likeable characters, edge-of-seat drama and a brilliant script, show why the programme has been so acclaimed and why it is currently up for 12 Emmy Awards. So do yourself a favour – believe the hype and give Orange is the New Black a shot.