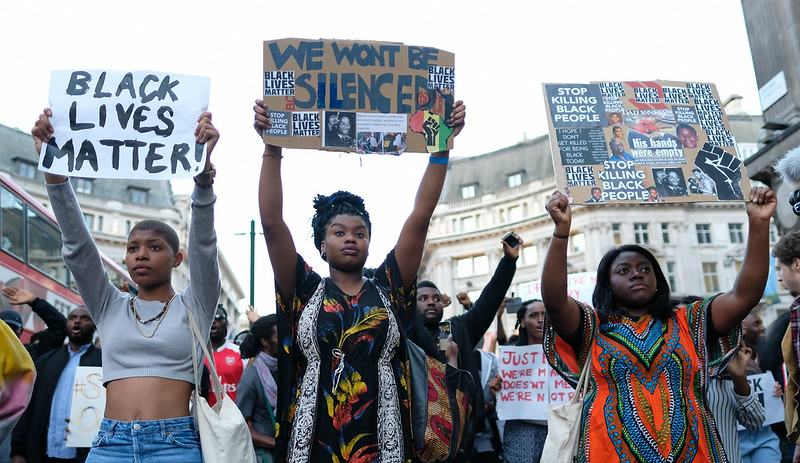 Comment Writer Sundus Abdullah discusses the recent Black Lives Matter protests after the death of George Floyd, who was murdered by a police officer in Minneapolis, and talks in depth about systemic racism in the US and the UK

Written by Sundus Abdullah
Published at 12:00 on 2 June 2020
Images by Alisdare Hickson

On Monday 25th May 2020, Derek Chauvin firmly pressed his knee into the neck of an unarmed Black man for five minutes whilst three other police officers watched. The offence? A grocery store worker allegedly received a fake $20 bill and in response to that, endangered the life of George Floyd by dialling 911. According to law enforcement, this ‘offence’ is punishable by death.

Videos of the event circulated across all social media platforms, in which we can see the obvious distress George Floyd was in as he pleaded ‘I can’t breathe.’ This case is eerily similar to the death of Eric Garner in 2014, who also said the very same words whilst being put in a chokehold by New York City police officers for allegedly selling unlicensed cigarettes.

George Floyd’s death was not only caused by the man who physically killed him, but by those who failed him by being bystanders. Like the other Asian police officer involved, Tou Thao, who watched as Derek Chauvin took a harmless life. Or like the Arab-owned store that called the police because of a counterfeit $20 bill. Instances like this explain why I, like many other Black people, reject the umbrella term ’POC’ (People of Colour). It is because of the anti-blackness within ethnic minority communities that allows Blackness to be feared and equated to criminality. This may be hard for some non-Black people to understand that you can feed into racism and uphold anti-blackness by internalising these beliefs. You don’t have to be kneeling on a Black person’s neck for you to be perpetuating the very stereotypes that end up killing them.

In both of these instances, protestors took to the streets to call for justice and change. And in both of these instances, what began as peaceful protests quickly became violent. This week’s protests in Minnesota saw the use of tear gas and riot police, which in return caused protestors to loot stores such as Target. There was a lot of backlash on social media to this, with many people wondering why protestors were using violent measures to prove a point and being more outraged that a multi-billion dollar business was being stolen from. The fact of the matter is that being polite and peaceful is easy to ignore. Take Colin Kaepernick for example, his peaceful kneeling caused outrage and lead to the hashtag #JustBurnIt trending to protest against his Nike deal. Comments like this preserve respectability politics; hypothetical scenarios that further the agenda that Black people should die for nothing. When there is a violent and inherently racist system that exists solely to commit genocide against Black people, what else is there except for vehemence?

It was just last week that white Americans in Michigan were protesting against lockdown measures using assault rifles. Once again, there are apparent disparities between the way white and Black people are treated in such situations. It is terrifying to live in a world where armed people protesting the right to have a haircut is met with peaceful reactions from the police, whilst Black people going about their normal lives are met with horrific ferocity.

In all cases similar to George Floyd’s, there have been little to no repercussions for the police officers involved. Trayvon Martin was a 17-year old boy who was murdered by George Zimmerman in 2012 for ‘looking suspicious’ after buying a packet of Skittles from a store. Since then, George Zimmerman has been idolised by white supremacists who queue to get his autograph at gun shows. He had even auctioned the gun he murdered an innocent child with for $100,000 and is under federal protection. Police officers are rarely held accountable for hate crimes they commit under the guise of ‘self-defence’ but in the rare occasions where they are, they serve minimal sentences. Once again, murderers are able to face no consequences for their actions and are protected by the government, so it is no surprise that people feel betrayed by the institutions that were apparently designed to protect them. The law enables them to have limitless immunity simply because they are ‘serving their country’ by hiding violent tendencies behind a badge and a gun.

As if worrying about being disproportionately killed by a virus due to medical racism wasn’t enough, Black Americans have to fear being murdered by the police too. There is something sinister about the Minneapolis Police Department using tear gas, a chemical weapon that causes coughing amidst a pandemic which is driven by a contagious, airborne virus that attacks the respiratory system. Anti-blackness serves as a global pandemic that has been killing Black people throughout history. If we aren’t worrying about issues like this, we are being disturbed by the likes of Amy Cooper on our daily walks. Or being murdered by white supremacists on our morning jog, like Ahmaud Arbery. Apparently being a seven-year old and sleeping in your own home is a crime too, like Aiyana Mo’Nay Stanley-Jones. You can’t ask for help following a car accident either because it may end in the same horrendous way it did for Johnathan Ferrel. All of these individuals were unarmed but that does not matter when your skin colour being perceived as a weapon is enough to warrant your death. There isn’t a single activity that a Black person, in both adulthood and childhood, can do without being met with vicious responses.

Time and time again we see and hear stories in the news of Black people losing their lives to murderers in uniform. In this digital age where everything is caught on camera, it is difficult to escape from this especially as a Black person. The constant sharing of images and videos of violence is traumatising and deeply upsetting for many of us as they often appear without warning. As more graphic imagery is posted on social media, we are susceptible to becoming desensitised to this. The circulation of such graphic imagery is a new form of lynching; digital lynching whereby white supremacists are able to feed off violence against Black people. Digital self-care and self-preservation are essential during an exhausting time like this; it does not mean we have stopped caring. Having to justify why our existence matters and is worthy as everyone else’s is draining for our mental health. There is a limit to how much we can talk about and relive the very injustices we are subject to everyday.

Comparing the UK to the USA and assuming that this country isn’t ‘as racist’ is an ignorant sweeping statement. It’s clear to see that the oppression of Black people transcends borders, cultures and languages and is deeply ingrained in all societies. Racism manifests itself only slightly differently here, as there are more ‘covert’ illustrations of it, however, it is only seen in this way because white people refuse to acknowledge it. For the affected, racism is not subtle at all. Whether it be anti-immigration policies, housing discrimination, a whitewashed national curriculum, hate crimes, the glorification of colonialism and claiming reverse racism, these are all tactics used to push systemic racism. The Windrush scandal, Grenfell tower and both Belly Mujinga and Shukri Abdi’s deaths are just some examples of the atrocious crimes this country has committed against ethnic minorities. The UK has a huge issue with the denial of racism wherein anyone who speaks out about their experiences is silenced. Stormzy was attacked by the media for stating in an interview that the UK is ‘definitely, 100%’ racist. Although police in the UK do not necessarily carry guns, they are not immune to carrying out racially-charged offences. For example, Black people are 40 times more likely to be stopped and searched in the UK. Even so, we have an array of our own cases of police brutality and murders protected by uniform. Mark Duggan, Sarah Reed, Ricky Bishop, Edson Da Costa, Julian Cole, Rashan Charles. These are just a fraction of the names of people who have been killed by the British police force.

This is not a one-off occurrence. This has repeatedly been happening for the past 400 years and will continue to happen in the future unless something is done to dismantle the infrastructure in place that works tirelessly against Black people.

It is imperative to defend and speak up about the racism we witness in our day to day lives, no matter how discreet it may seem. Allowing microaggressions and other forms of covert racism to persist ultimately leads to extreme events like this to happen because they are the foundations of all racist attitudes. It is equally important to care about the lives of Black people when they are alive and well, not just when they are murdered.

Performative activism, like tweeting a hashtag or reposting chain messages, is not the same as educating yourself and those around you and calling out anti-black sentiments, irrespective of how big or small, when you see them. It is not the same as supporting those who are in a less privileged position than you and donating to charities that fight against inequality or signing petitions. Not using your voice and platform, no matter the volume or size, is no different than telling your Black friends that you are indifferent towards their existence. Choosing to stay silent and complicit makes you an enabler of violence.

We are subjugated by a system that determines to reach us no matter how far we go in life, or how successful we become, whether that is through acquiring wealth or assimilation. Remember that we can’t choose when to be Black; this is our reality. We have never had the privilege of choosing to be politically aware or not.

“If you are neutral in situations of injustice you have chosen the side of the oppressor”- Desmond Tutu.

Petitions and donation pages relating to this topic: