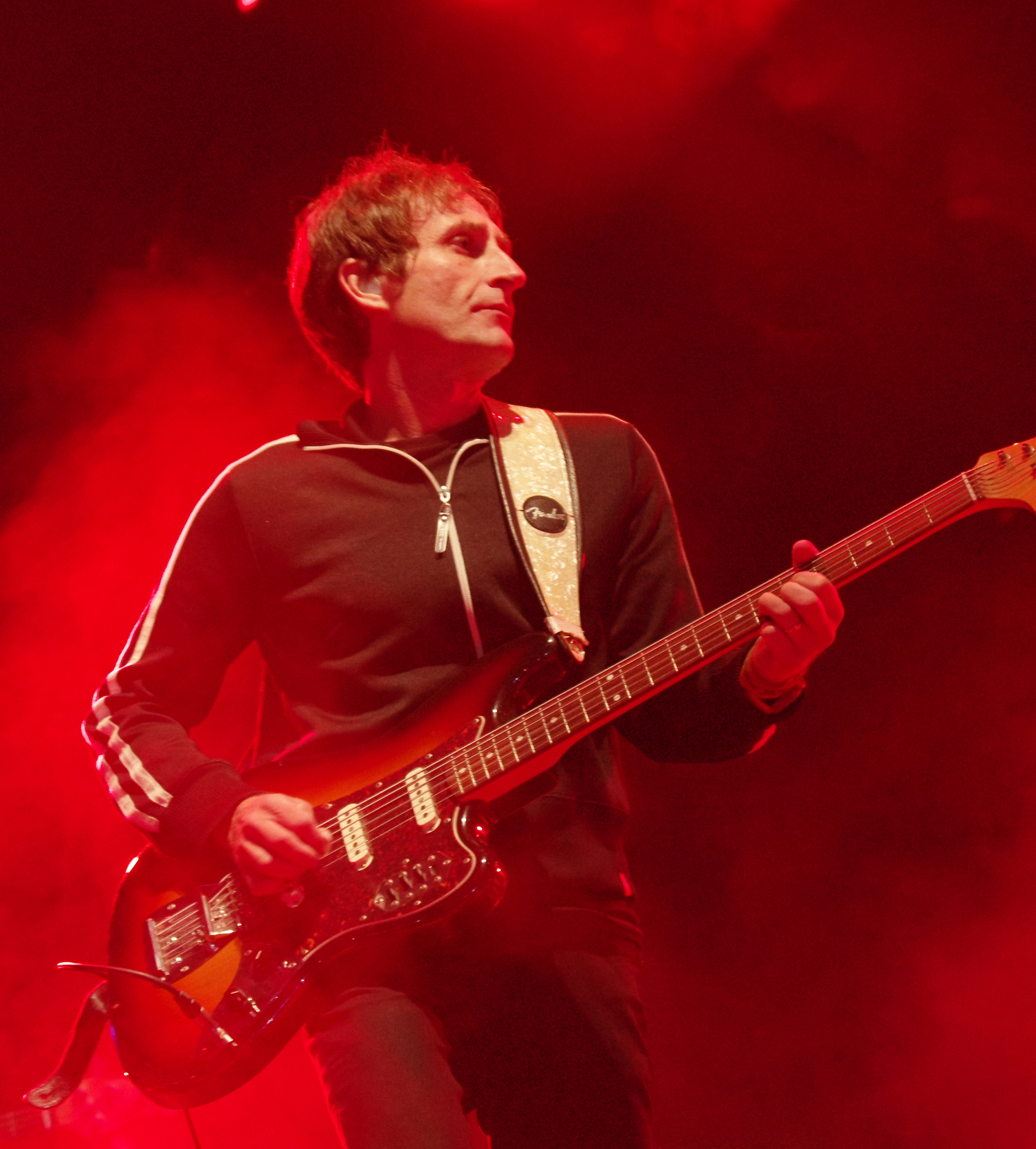 Redbrick’s Seb Rolley has the chance to chat with James guitarist, Saul Davies, ahead of their Birmingham gig later this month

Seb: First off, congratulations on the new album! I think it’s definitely one of the best in the band’s career.

Saul: Thank you! That’s very nice of you.

I really enjoyed the series of videos you released on your website about the making of your album and was interested in how important you’d say bringing Charlie Andrew and Beni Giles (the album’s producers) onto the project was to the finished product?

Very much so, you’re very right to identify them as having a big hand in it. The majority of Beni’s work in it was in the initial sounds and ideas. We’ve done a load of demos and we did our normal thing of jamming, making noise and then editing and distilling that down into song-sized chunks and then Beni started messing about with them.

As always, some of those things worked and some didn’t, whatever, that’s just the way it is, and we managed in the end to get to a point where we thought that we had a good album’s worth. Then I guess Charlie added another layer of aesthetics to it. It was a very collaborative effort and our voices are very much heard within it, but we certainly didn’t want to stand in the way of their contributions.

You mentioned about the band’s use of jamming to write the tracks. How would you say that process affects the finished song as opposed to a more solitary song-writing technique?

Well, one thing we’ve done in recent years is we’ve recorded our jams to a really high quality so we can use those elements. All of the songs across the record have got newly-recorded elements, but actually quite a bit of some of the songs are elements from the original jam as well. We can’t underestimate what that process brings to it.

Having said that, I think there’s a tendency for people to always look for things that find favour with other people. I think regardless of whether you’re a guy just sitting around the piano just writing a traditional song or you’re distilling, as we do, jams down into bite-sized chunks, the tendency is to look for things that other people will find attractive or appealing. The challenge is to no do that and find things that people will not find appealing and it means you’re doing something a little bit different and challenging. But I think the human ear demands familiarity, you know what I mean? What you have to do is try and find those elements in those improvisations and those jams that are a little bit off kilter and try and maintain that throughout the process, and I think on this record we’ve managed to do it.

With your UK tour coming up, how does the band go about taking the energy which has been captured in that process and transferring it onto a live stage?

It’s a challenge certainly, because obviously things are sculpted in the studio, even if elements of the jams are used. One thing is, just technically, relearning things that you’ve played. For example, when you’re playing guitar in a jam you’re not thinking about what you’re doing, you’re just jamming and making a noise. Then that might find its way into the final recording and you go, ‘how the fuck do I learn that? I don’t even know what tuning the guitar is in, if there’s a capo, which guitar I used, how the fuck do I get that sound?’

All this stuff comes into play and it’s a real challenge and I’m not very good at that. I’m really good at the improvising bit, I’m not that good at the learning bit, I don’t really give it that much value to be honest. I’d be happy just going out and jamming all the time. But yeah, we rehearse, we don’t rehearse a lot as a band, but we try and prepare as well as we can. That’s another trick, don’t over-prepare as a band. If you over-prepare you just become Coldplay. You become stuck artistically.

I guess you don’t want things to sound too perfect, that’s not what live music is about.

No I don’t think it is and I think a real problem that we have in live music generally is that people are striving for a certain kind of show, a perfect show, and, it’s my age obviously and the cultural background I come from, but I find I’m completely disinterested in ‘the show’. Its pointless, meaningless and just a waste of time.

More specifically to do with you as a musician, how would you say your role as a multi-instrumentalist affects your playing? Do you draw elements from violin into guitar and vice versa?

Not specifically. What I would say is that I’m not technically very good and I have no interest in technical proficiency, a bit like having no interest in ‘the show’ as such. I don’t compare myself to anybody doing anything really. The musicians that I tend to like or appreciate are the people who play simple things. When Neil Young hits a guitar chord you think that’s it, there’s nothing more to say really. I love the way Bob Dylan plays acoustic guitar. People say, ‘oh he’s a really shit guitar player,’ but I think he’s a fucking amazing guitar player because he creates the backdrop to his voice. Fucking hell, the guy’s a genius.

My favourite drummer is Ringo Starr. I know John Lennon famously said, ‘he’s not even the best drummer in the Beatles’, but he was, and he changed the whole face of the way that people approach playing drums. The guy’s amazing. I put a lot of value in being able to say that if I’m standing on stage next to Tim and we’re just playing an acoustic song that I’m aware of my role. My job is to support the vocal and make the vocals great, there’s real skill in that which is completely unseen, many people don’t get it.

Why has the band chosen to open this tour with an acoustic set rather than a conventional support act?

It was just that we love to play and present ourselves that way. We love playing acoustically and semi-acoustically or stripped back. We love it and we’re really good at it. It allows us to do a whole catalogue of tunes and I think its funny as well, there’s some humour in it. I think we’re going to call ourselves Jim, which is quite funny. And why not? People come along and hear maybe two and a half hours’ worth of James’ music rather than just an hour and fifty. I’m not decrying our support bands, we’ve had some amazing support bands, but I still think we’re the best support band we’ve ever had.

It means a lot that you’ve taken the time to talk to Redbrick, a student newspaper, and I was wondering what you see as the role of student media in music, both in general and in relation to the band.

Well, I think the role of all media is to inform and to represent different voices. I think there’s a huge responsibility on media, obviously, given that there’s so much of it now, so much information and so little time to ingest it. But I think that as a band, as we grow older and as we generate more catalogue our legacy becomes bigger and bigger. What we must do as a band is bring new people to appreciate us and actually engaging media which comes from student universities rather than rather than mainstream national sources, it’s all important but I think there’s something really important about engaging with people on a local level.

I’m not so sure that global connectivity on a media basis is entirely positive, because I think you can end up missing the nuances. Actually, very local individual experiences can be signposts for bigger issues so I think universities and the information and people that come out of universities must reflect the diversity of the world that we live in. To some extent, universities have tied themselves up in knots a little bit and there’s a little bit of confusion at the moment about how we define certain experiences. When I went to university in the early 80s in Manchester it was a hotbed of insurrection and I would like to think that universities could be hotbeds of insurrection again. I’m not sure they are anymore.

The majority of things which are going to take place, good or bad, in the future of our world will be generated and sponsored by people who are just growing up through their teens and into their early twenties now. You guys are all the shakers and movers of the next generation, so you’ve got to get it right.

It’s definitely an interesting time to be growing up in, with a lot going on in the world right now.

I mean there always has been. When I was at Manchester it was the fucking miners’ strike and all that stuff with Thatcher. No wonder Manchester Uni was such a hotbed of insurrection when it had all of that flying around us. And, musically, we had the invention of house and club culture changing, it was amazing. Going back to your original question, I think it’s really important for us to engage with guys like you and publications like you.

If we were just a band who didn’t put out records and just played our greatest hits, you guys wouldn’t want to talk to us, but the fact is that you can see we’re attempting to make valid and interesting music. Where we see bands and artists of any discipline doing that then I think we should celebrate it really. I understand also that new things are absolutely and utterly vital. We will be swept away by new things to come but we leave our mark, we leave a little mark with people.

I think that especially with James as a band the leaving a mark idea is very important. I can remember meeting a man at one of your shows a few years ago who said that James’ albums had been very important to him and his friends through some tough times when they’d been in the army.

Yeah, I get that feeling more and more. I’ve had the experience myself recently. There’s someone close to my family, her mother committed suicide and I was listening to some of our songs in preparation for this tour, and suddenly the lyrics of ‘Getting Away With It’ struck me: ‘ are you aching for the blade, that’s ok we’re insured’ and I was like, ‘fuck’. I suddenly thought, this is why people say to us this song helped me or this album helped me and I was like I get it and I’ve experienced it myself.

Oh yeah definitely. Thank you very much for talking to me today, I’m really looking forward to the tour! I’ll definitely be catching you guys in Birmingham.