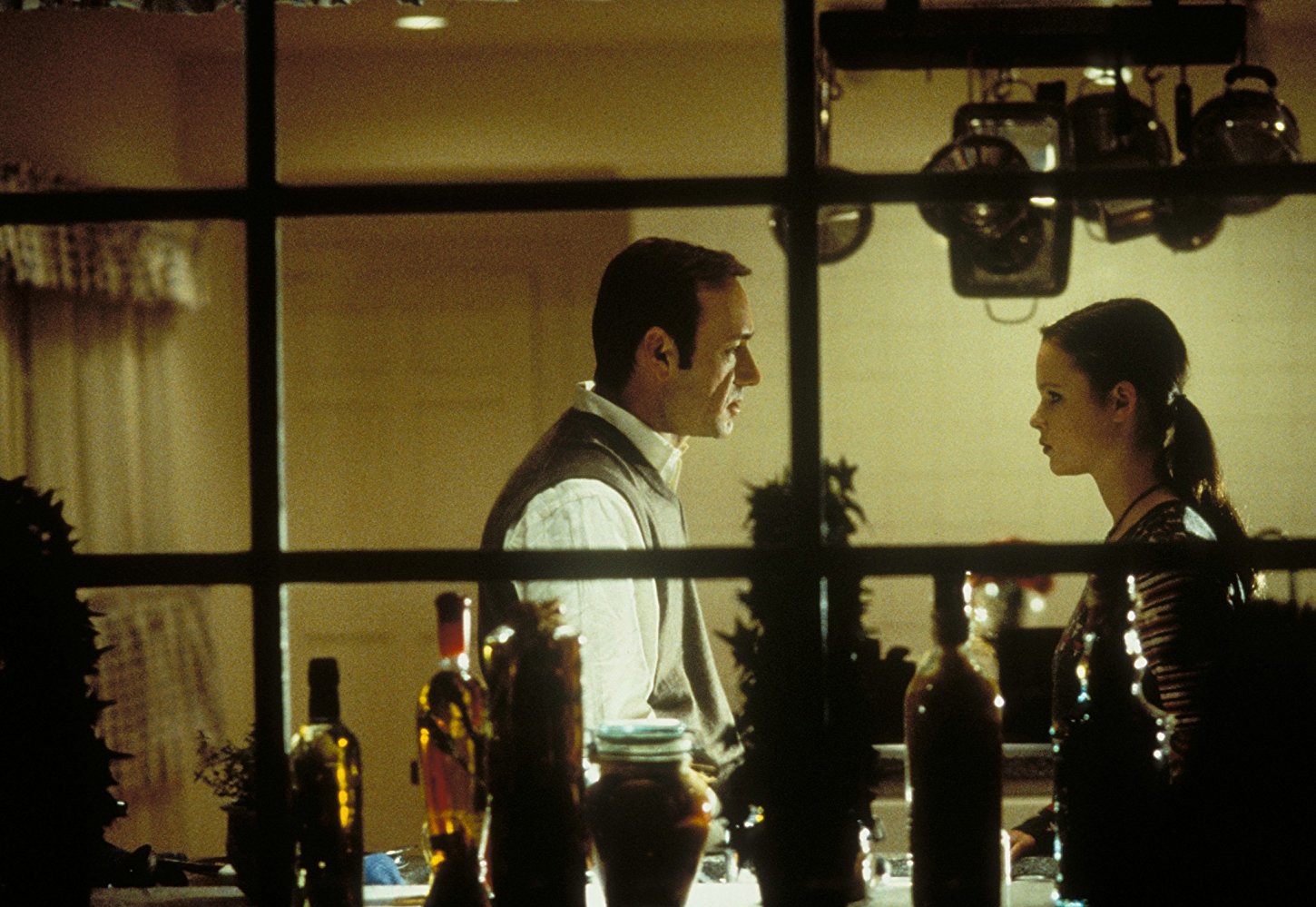 Television Editor Catrin Osborne reflects on one of her favourite films of all time, all the while trying to separate art from the artist

American Beauty remains a masterpiece, but a modern viewing lacks the original enjoyment, due to the uncomfortable realism of Lester Burnham’s (Kevin Spacey) paedophilic infatuations.

The first time I saw American Beauty was 20th October 2017, nine days before Anthony Rapp accused Kevin Spacey of sexual harassment when Rapp was underage. This was followed by a wave of similar allegations against the previously beloved star.

Revisiting American Beauty since the downfall of Spacey, it is difficult not to feel queasy as Lester lusts over Angela Hayes (Mena Suvari), an underage cheerleader. Like listening to an R. Kelly song, one wonders whether they can still derive enjoyment from this. This is because, whilst American Beauty does not support paedophilia, the audience foster a connection to Lester, despite his crimes.

To separate art from the artist, American Beauty’s direction remains highly appraisable. The original brilliance of Alan Ball and Sam Mendes’ creation is in its portrayal of the existentialism of suburban life. At the end of the most tumultuous century, American Beauty questions whether the comfortable bourgeois life is the dream.

From the beginning, we are aware that Lester’s following midlife crisis will be the final year of his life. We see him sexually fantasise about his daughter Jane’s (Thora Birch) best friend, quit his job, start smoking marijuana and end up working in a fast-food restaurant.

As Lester’s life unravels, so do those of the other Burnhams and the Fitts, their next-door neighbours. American Beauty offers a damning perspective on middle-class monogamy. Carolyn (Annette Bening), Lester’s uptight wife, chases the thrills of guns and infidelity. Meanwhile, Jane, Lester’s perpetually moody daughter, seeks comfort in Ricky Fitts (Wes Bentley), a drug-dealer and social outcast.

Like an ensemble piece, the film focuses on nine or so primary characters. Each actor offers an equally good performance, keeping their characters nuanced. American Beauty does not resort to an antagonist-protagonist divide which contributes to its realism.

The film is also balanced in tone – humorous as we laugh at the characters’ obnoxiousness such as Angela boasting about men falling head over heels for her. However, it allows the audience to reflect on their own humanity as we can see ourselves in the Burnhams’ first world problems.

The cinematography is superb. Ever so plain, Mendes captures the blandness of suburban life. Amidst this, fantastical bursts of petals offer an insight into Lester’s desire for an ounce of euphoria. The motif of the red rose stretches throughout the film. Tying in with the title, the floral species reminds the viewer of the two primary themes: America and beauty.

Likewise, Thomas Newman conveys the sense of detached living through his score. The minimalist percussive pieces are perfectly off-putting. Amidst this, interjections of popular music represent an escape from bland, suburban life. The opening chords of Free’s All Right Now are excellently merged with Carolyn’s screams.

Though Lester’s death hangs over the film from the introductory narration to the concluding scene, American Beauty never feels like a gimmicky ‘whodunnit’ style of film. Mendes’ choice to remove trial scenes with the primary characters worked. This shifted the focus from the cause of Lester’s death to his final year.

At points, American Beauty borders on becoming as pretentious as Ricky. Frequently seen with a camcorder, he views the world in an alternative manner. His magnum opus consists of a plastic bag floating in the wind, inspired by Ball’s viewing of this phenomenon in the early 1990s. Some viewers may react to this element as precocious but besides this, American Beauty is never too artistic to the point of isolating an audience.

The ending montage of Lester’s memories doesn’t meet its emotional purpose. Whilst many films create sadness through flashbacks, I respect American Beauty’s for mostly lacking exposition. We don’t need to see the former joy of the Burnhams but can sense it in the present such as the tension across the dinner table. Thus, to conclude the film with black and white clips of Lester’s life feels cliched.

However, Ball and Mendes succeeded in their decision to leave the film without an epilogue. We don’t need to know the ongoing impact of Lester’s death as it is already implied as the camera moves from character to character’s reaction to the gunshot.

American Beauty will always be a pinnacle of twentieth-century cinema. However, its near perfection has been tainted as the modern viewer can see Spacey lurk underneath Lester’s paedophilic desire.