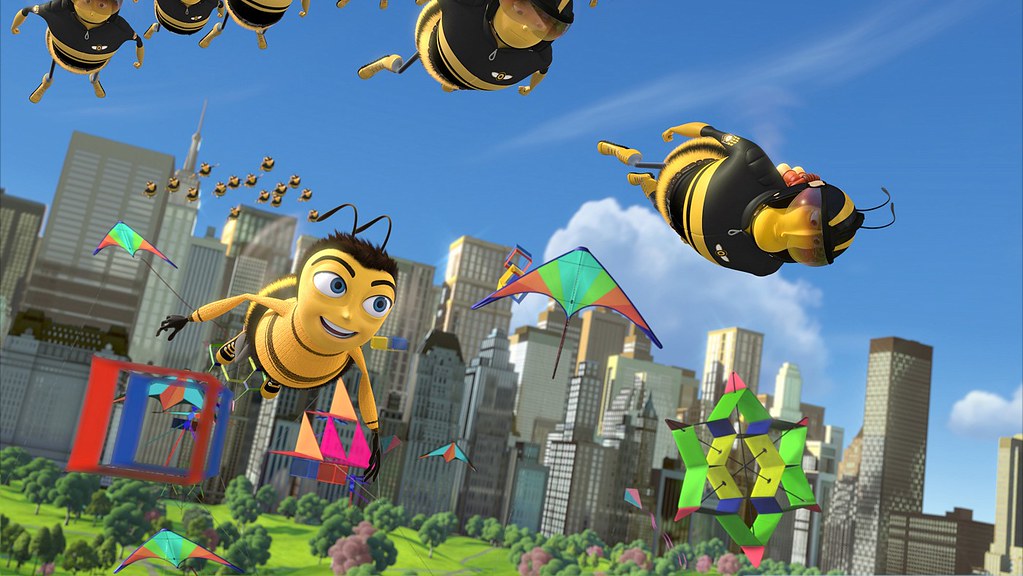 We’ve all been there: ready to graduate after 3 long days at college. Excited at the prospect of four or five months of work. Then, death. Barry B. Benson’s (Jerry Seinfeld) dilemma is timeless: how can I fashion purpose out of life as a bee? He, brimming with nonconformist spirit, rejects the chance to clean toilets or pick excess honey and follows a group of pollen jocks outside the hive and into the wide, wide world.

The odyssey that follows would have made Homer jealous. He soars through Central Park, is batted across a court while stuck to a tennis ball and discovers true horror after encountering dead bugs adorning a car windshield as if it were a battlefield.

Finally, he finds Vanessa (Renée Zellweger), a human woman who saves him from almost-certain death. Of all the apartments in all the towns in all the world, he flew into hers. The two form a connection which borders on attraction, perhaps the beginning of something more than a beautiful friendship if it weren’t for the fact that he is, ultimately, a bee. She doesn’t really seem to care very much, though. They have lots in common, after all: she grows flowers, he can pollinate them. She doesn’t like cruelty against animals, he is one. Barry and Vanessa’s relationship is the anchor of a pretty epic journey through as many genres as you could possibly want: from workplace comedy to interspecies romcom and legal thriller to social issue drama. You want it? Bee Movie’s got it. (At least Cats picked a lane!)

Barry’s journey into the human world leads to the shocking discovery that millions of bees are being kept – and gassed – by humans to produce honey, prompting him to launch a legal challenge to liberate his fellow insects. This, and the disastrous consequences which follow, take up the bulk of the second half of the film. Bizarre cultural references to Larry King Live and Ray Liotta’s 2005 Supporting Actor Emmy win make you question your sanity even more than you already have.

I actually wish it was as fun as it sounds. Seinfeld seems incredibly bored as the voice of Barry, remarkable considering that he produced the film and wrote the screenplay which is so frantic that, ironically, it ends up lacking a sting in its tail. Like a bee, it flits energetically from one point to another but it fails to offer anything even remotely close to the sweetness of honey.

It may try and ask some pressing questions (should bees be freed? Ya like jazz?) but nothing in the text really lives beyond the entertainment value it has now that it’s been reborn as a meme. So-bad-they’re-good films like Cats and The Rocky Horror Picture Show at least understand how to use total anarchy to their advantage; Bee Movie isn’t allowed to be outrageously awful enough to be fun. This is disappointing for a film which starts promisingly with a flurry of jokes about the relentlessly bleak brevity of its characters’ lifespans as literal drones. At least A Bug’s Life had the gall to liberate its proletariat by the film’s end! Oh well. We’ll always have the memes.

Duller than it has any right to be, Bee Movie had the potential to be remembered as the kind of manic, collective fever dream that we all love to hate but will have to settle for being treasured as a meme instead.

Looking for more comedies? Take a loot at these reviews from Redbrick Film: