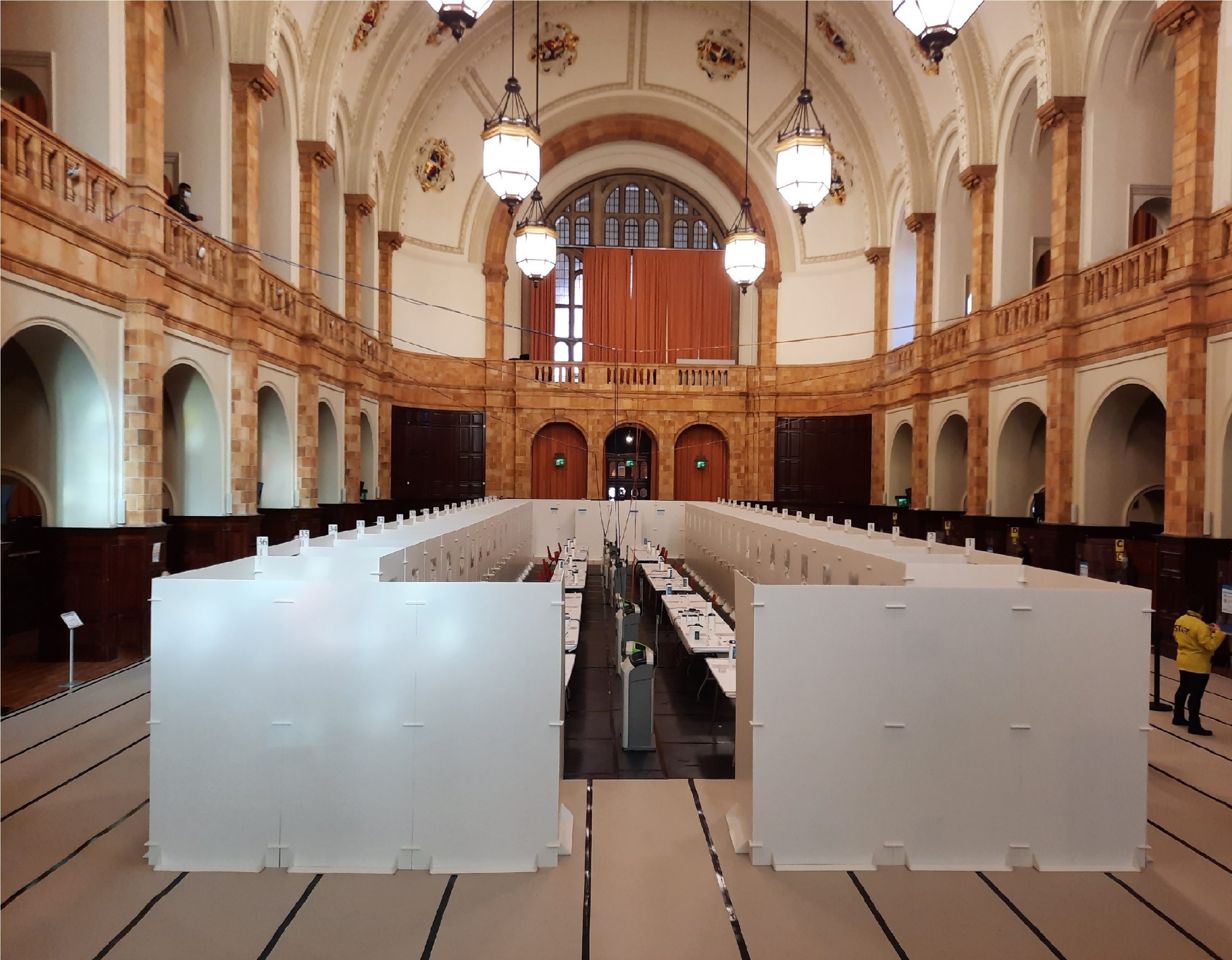 Despite substantial – and effective – efforts to make the process relaxed and ‘welcoming’, it is impossible to ignore the somewhat post-apocalyptic feel of the labyrinth of queue lines, desks, and testing booths dotting the Bramall-Aston Webb complex. Bringing their booking confirmation and a face covering, students will have their temperatures checked before venturing inside – it is strongly emphasised to us how this facility is only for those without COVID-19 symptoms. Students who do, in fact, have COVID-19 symptoms, will be required to be tested at the main site near the Sports and Fitness building.

After ‘checking in’ in the Bramall foyer, the process of testing is hoped to be ‘fairly brisk’, in the words of Jon Elsmore, Director of Student Services. Upon entering the Great Hall, it is hard not to be struck by how bleak it feels; a space once used for graduation now the epicentre of the University of Birmingham’s response to the pandemic. There are 37 testing booths, 1 of which is accessible, providing assistance for anyone struggling to perform their test unaided. The other 36 booths, all equipped with hand sanitiser and testing instructions, have a window into the central area, where University medical and biosciences students will be working to analyse the tests on-site.

The tests themselves are lateral flow device rapid tests, which give results in 25 minutes. This means that, hopefully, students will be sent their test results within hours of taking the tests, unlike other tests which can take much longer. Once established, the results are logged into the NHS testing system, which then notifies the students of their result.

Elsmore made clear, however, that a negative result does not mean that students should relax their attitudes towards government restrictions, instead emphasising that the testing program is ‘all about giving people additional reassurance that they didn’t have [COVID-19] at the time,’ describing the test as a reflection of ‘a moment in time.’ Once they have received their test results, students are encouraged to return home as soon as possible, to reduce the chances of catching the virus before they leave Birmingham. Students who test positive will be required to isolate for just 10 days, so even if a student tested positive on the 9th of December – the last day of testing – they would be able to return home on the 19th, in time for Christmas. Moreover, close contacts of anyone who has tested positive still have to isolate for 14 days, but are now allowed to travel home for this isolation period.

Following the tour of the new facility, Redbrick had the opportunity to interview Jon Elsmore, the Director of Student Services:

Ellen Knight: So, the first thing I just wanted to clarify was, you were talking about the testing facility – so it’s University-run. Has it received NHS funding, or has the University paid for it?

Jon Elsmore: That that is a very good question. So, we were invited – in fact all universities in the country – were invited to set up an asymptomatic testing facility. Not every university has decided to go ahead. We have, and this very much depends, for some of the universities, on their size, their scale, and the proportion and type of their students.

JE (cont.): So, the university that I used to work at in Wolverhampton, which isn’t that far from where we are, 80% of their students live within a 20 mile radius. So they’re not doing it. The students aren’t – essentially they’re not ‘going home for Christmas’ [as they live nearby]. Our demographic is completely the other way around in that 80% of our students don’t live locally, so will be ‘going home [for Christmas]’ somewhere.

JE: (cont.): When we were invited to set up the site, by the government, we said yes, that we would, there is a government cost recovery programme in place. So we can reclaim some of our costs, not all, but the majority of them, we expect. So essentially, what the government is providing, is that they are providing the testing kits, the mobile phones [to log the results into the NHS system], the infrastructure to register the tests, all the barcodes and everything like that. What the University has to provide is all the staff, the infrastructure to build the testing sites, and for us to build and deploy the booking system to get students to that door. So that’s the share of responsibilities. But we’ll get some of those staff costs back from the government’s cost recovery programme.

EK: Do you think you give me a ballpark figure, roughly, of how much it costs in general?

JE: Uh, no, not off the top of my head. At this point, no. Yes, come back and ask us after we’ve finished running it and we’ll have something. We’re adding it up as we go along, but I don’t have that to hand.

EK: That’s fine, we probably will come back and ask. I had another question about the testing; so are there any drawbacks to the lateral flow rapid test? Is there a reason it’s not being used for the symptomatic testing?

JE (cont.): And that’s why we’ve been saying very clearly about this, [the test] is not a guarantee, if you get a negative lateral flow device test, this is not a guarantee that you’re perhaps not in the very early stages of the virus. What it means is that your viral load is so low as to be undetectable on the day, in order for you to be able to travel home with some reassurance. But when you get home, don’t assume what you now have is some sort of immunity certificate, because that’s not what you’ve got. You should still very much be practising good guidance on social distancing, taking care particularly with members of your household who may be vulnerable.

EK: So with that in mind, would you suggest that students, even if they get a negative result, should, to some extent, isolate when they get back home?

JE: Isolating is not recommended, but good social distancing at home and with your friends is. There’s definitely a distinction between isolating and normal practices that we should all be observing.

EK: Brilliant. So that was it for my questions specifically on the testing, but I do have a couple on return to campus in Semester Two.

EK (cont.): Okay, so this is kind of related to testing, but because students are taking tests to allow us to travel home for Christmas, will you be encouraging students to get tested before returning to university? Do you think there’ll be a testing initiative run again in early January?

JE: That discussion is literally live right now! One of my other colleagues has been in that meeting. So there are definitely plans being developed by the government. There are two options that are being considered; one, which is pretty much as you’ve described, which – we’re calling them ‘test to return’ or, ‘test on return.’ So the idea of ‘test to return’ is that you get tested where you are before you come back, or ‘test on return’ would mean that we, the University, would be doing testing like we are now as students come back in January.

JE (cont.): One of the reasons for us building our test site, that we’ve done that walk around [of] earlier on, is pretty substantial. Quite a few of the [sites] that you might look at, will look like a few trestle tables and a voting booth. And we built [the site] like that, because we were strongly leaning towards the fact that we will be encouraged to do this again, in January. We were expecting that, we want to be ready for that, so that we didn’t have to put it all away and then get it all back out again, in January. So we’ve built our test centre with the expectation that we will be using it again. I think we will get a clear answer from the government – or a clearer answer from the government –  literally over the next 48 hours, but our expectation is that there will be some testing regime in place for students across the country, in order to be able to ‘test to return’ or ‘test on return.’

EK: That makes sense, thank you. So I’ve got one last question, that you might be able to give me an answer for. So the UCU is currently voting on taking industrial action to move teaching and working online only in Semester Two. Given this, combined with what we’ve just spoken about – the testing on return or before return – do you have any idea of what the university’s current plans are for returning to campus?

JE: So we’ve already said, I think reasonably maybe not as clearly as we might’ve, that our default assumption will be that our bi-modal model of provision will continue in line with the government advice. So essentially, what we’ve followed, at every point, has been the government’s advice. And whether that was through national restrictions, which end tonight, or tier three, which we turn into tomorrow at midnight, like pumpkins; whether it’s national restrictions, or tier three, education settings remain open. And so we’ve always been cautious in making sure that bi-modal provision is in place. Our default expectation for January is that Birmingham will still be in tier three. We will still be teaching bi-modally until the government tells us otherwise.

EK: Brilliant. That’s really good. Thank you so much for answering our questions there. That’s been really useful.