James Marvin dons the cowl of the Caped Crusader and let’s us know how Telltale Games have done with their latest series based on the DC Comics legend. 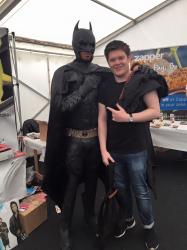 WARNING: This review may contain what can be considered mild spoilers. Minor plot details and how certain characters have been approached in this version of Batman are mentioned.

Batman: The Telltale Series was one of my most anticipated titles of this year when it was first announced. Not because I’m a huge Telltale fan, I’ve only ever really enjoyed their Walking Dead stuff, but because I’m a self-confessed bat-fanatic. I’ve always felt that Telltale’s formula was very good and well-constructed but only really worked in the right intellectual properties to match it. So far they’ve done this impeccably well picking settings that suit a more narrative driven approach which is drawn out by the plot, characters and writing, such as Game of Thrones, The Walking Dead and The Wolf Among Us.

But this is Batman, and because of that it had me worried. Batman by nature is a very action packed sort of deal, whilst it does have its more sombre and dramatic moments, The Dark Knight is more well renowned for his ability to effortlessly clean a room of baddies without breaking a sweat. This aspect after all was the best part of Batman v Superman, let’s be real. Whilst I recognised that they did a pretty good job with Tales from The Borderlands, y’know the point and click game that was born from a first-person shooter, it wasn’t enough to quell my worry.

This is where my major problem lies with Telltale’s Batman. It’s not really a Batman game but more of a Bruce Wayne experience. Not that this is a wholly bad thing when you’ve actually played the game it’s just that the parts of the game where you don the mask are probably when it’s at its weakest. Whereas something like Tales from The Borderlands could just strip away the action packed nature of its sister series and focus solely on a narrative-driven approach, you can’t strip away the Batman from Batman otherwise you don’t have a Batman story. This means you have to somehow incorporate this menacing alter-ego. There are two areas in which Telltale have planted a seed for what could turn out to be very interesting mechanics later down the line.

Firstly, the most positive, this is the first Batman game where I’ve actually felt some notion of being ‘The World’s Greatest Detective’. There is a section in the first episode where you have to examine a crime scene and then physically link each bit of evidence to each other to determine what happened. A bit like that stuff in the Arkham games except a bit less wishy-washy and not as forgettable. The only unfortunately I have to say about this is that’s a little bit too easy. Of course it’s the first episode and has to ease you into the idea, I just hope that in the later episodes they’re more difficult and maybe have the possibility to actually get something wrong which could affect what happens in the story making it somewhat L.A Noire-esque.

Secondly, you can prepare how Batman approaches a combat engagement. Do you throw that guy into the stairs or the pillar? Do you throw the table or the ornament at that guy? And so on. Of course your choices don’t actually affect anything except how the scene plays out but it does help in making you feel like Batman. It makes you believe that, with the right amount of prep time, he can literally deal with anything. It’s quite refreshing to actually have a Batman game that lets you experience the more methodical side of the Bat, scouring the environment inch by inch, deciding the absolute best course of action before pouncing into action.

Those are the two positives about being Batman in this Telltale story. The rest is rather mediocre. The actual combat is the usual QTE-fest that you’re used to in Telltale games. Push X, flick the stick right, pull the cursor into the circle and press R2. If you manage to miss any of the QTE prompts, don’t worry, as there doesn’t seem to be an actual fail state for this, it just delays you filling the ‘final blow’ metre. The ‘final blow’ being a rather bombastic and cool way for Batman to end the engagement. However, QTE combat just doesn’t really fit Batman. It feels slow and sluggish and the fact that the game goes into slow-motion every time something more complex than a straight punch is thrown (and for a man that knows 127 forms of martial arts that means a lot of slow-mo) is telling that the formula is being strained here. Obviously I wasn’t expecting Rocksteady free-flow style stuff but maybe something outside the formula could’ve benefited the game greatly here.

Then there’s the expected heavy amount of dialogue and choices that you make. Whilst the writing on both sides of Bruce’s personality and for the other characters is a bit choppy and, at rare points, so cringey even Joel Schumacher may wince, it’s the dialogue and choices that you make as Batman that suffer more as they are the most uninteresting. This is firstly due to how little difference there is in them, in this first episode at least. Shoving a guy up against a wall, hitting him in the face or barking at him in your robo-computer-voice all ultimately achieve the same end goal. The opposite is true for Bruce. Outside of the cowl your dialogue choices and actions should be considered much more carefully. Do you snuggle up to Carmine Falcone, risking the Wayne family image but maintaining your favour with buddy Harvey Dent? Who do you trust with major case evidence, the shining light of law enforcement Jim Gordon or the reporter Vicki Vale whose motives aren’t entirely clear? There’s an air of intrigue with the Bruce Wayne side of things where you actually worry that you’ve made the wrong choice. This is something you don’t get with Batman as not only is there little difference in the choices, but some of them are obvious as to which is the right way to go. If you know even a smidgen about the Batman character, you’ll have no trouble picking out the best options.

The worst of it though was when I picked the non-violent options during an interrogation scene as I wanted my Batman to be the true symbol of justice who only employs violence when absolutely necessary. Then Gordon walks in, noticing what was going on, and admiring my more pacifist approach to things, it even popped up saying “Gordon took notice of your non-violent approach”. Annoyingly it seemed my efforts were pointless as this was completely disregarded in the next scene with Alfred berating me for putting the guy in hospital. I didn’t lay a finger on him. I swear.

So Batman manages to be the most underwhelming part of a Batman game. However, other aspects do shine. The game looks gorgeous on Telltale’s new engine and the character models are probably the best I’ve seen in a Telltale game to date. The voice acting is superb with highlights being Troy Baker as Bruce Wayne/Batman and Richard McGonagle as Falcone. The characters, whilst most of them are your usual takes on them, were solid and well done. Meanwhile, Telltale’s original take on some of the characters were a joy to see done in a new and interesting way. Most notably Oswald Cobblepot, in this iteration shown as being pre-penguin and known as ‘Oz’, reinvented as Bruce’s childhood friend whose family was once as big as the Wayne’s but crumbled into dust.

Oswald’s character was probably the one I was most interested in by the end of the episode; wondering where his allegiances lie and what actions he will take in the future. Adding to that the whole overarching story was actually very gripping as an original tale in the Batman universe and actually benefitted by the implied nature that this Batman is still fairly new to Gotham. The story’s originality is definitely a key reason to dive into the game as it’s nice to see something completely new rather than just a different telling of an already established story which we already know the conclusion to.

This is why, despite it being more Bruce Wayne: The Telltale Series, I came away from Telltale’s Batman overall satisfied but praying for improvement in future episodes. I hope Telltale manage to make the namesake of the game more interesting and intuitive, at least on par with what goes on outside the suit. I’m genuinely intrigued as to where this original story is going to go and how the finale will play out. If you’re a bat-fan looking for an interesting original tale, then this has you covered and you should enjoy it from the outset. Otherwise, maybe wait until a few more episodes are out before diving in.