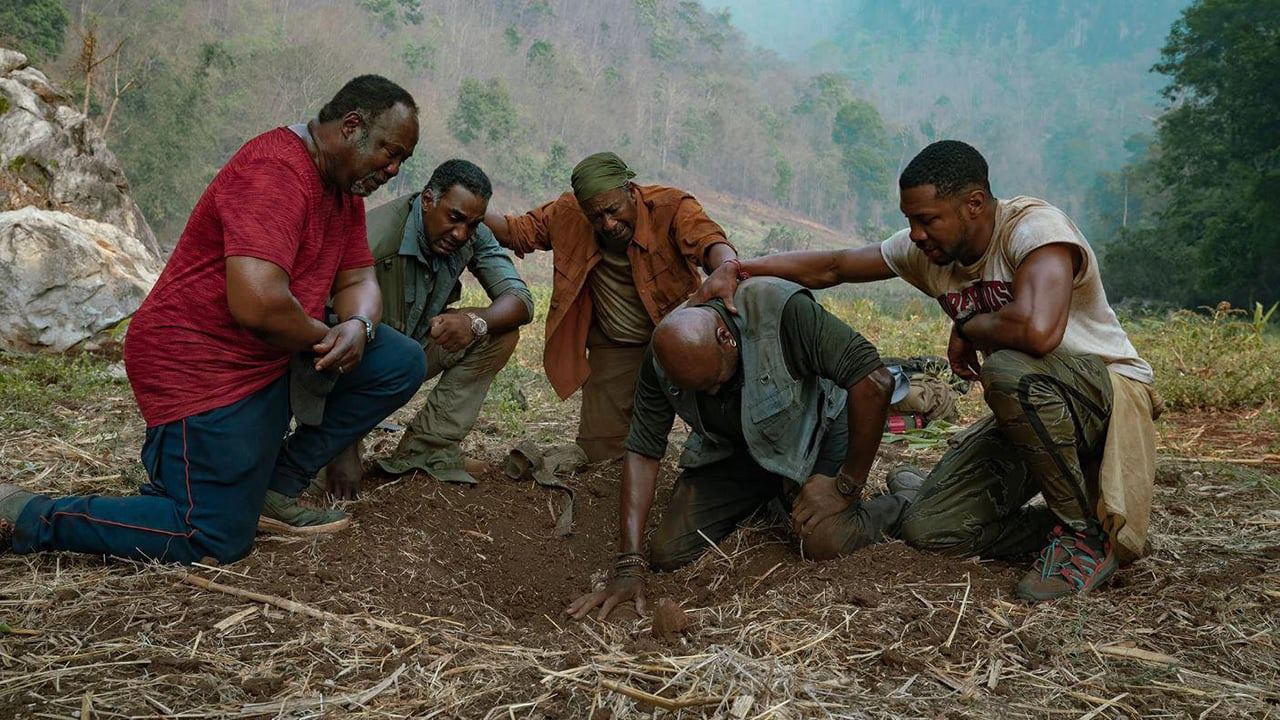 It is unlike Spike Lee to leave any stones unturned. His work doesn’t fizz or crackle, it combusts. He juggles a dozen things at once and threads them together with glee or contempt, depending on how he wants his audience to feel. Even his weaker work is a pleasure to watch because he uses all these features to make his fiction feel real. Rarely is that more true than when he tackles the question of race, something which is not a theme in Lee’s work but a reality of it. To white people, race is sometimes pressing but rarely ever overwhelming. Lee’s films reflect how the opposite is true for black people, who have not got the luxury to choose to see the much-vaunted colour blind world.

Da 5 Bloods sees his ideas crashing together with even more intensity than normal. It follows four black Vietnam war veterans returning to the country to find the remains of their friend, Stormin’ Norman (Chadwick Boseman), killed in action while trying to protect a crate of gold. Complex enough? No – the gold was originally meant to pay Vietnamese resistance groups who had fought alongside the Americans. Knowing that they could not deliver the gold to its intended recipients, the Americans buried it with the promise of returning to claim it for themselves. This return ends up taking place decades later, the four men now aged and embittered by the strains of post-traumatic stress disorder and the wearisome politics of their home country.

They journey into the jungle to find what they left. All four veterans find being back harder than they expected. Flashbacks highlight the emotional mark the war left, particularly given that Lee films in retro 16mm and does not recast the actors for the scenes set in the past. The weathered visages of Paul, Davis, Otis and Eddie stand in stark contrast to how they remember and venerate Norman’s youth. While still in the jungle, they discover that Martin Luther King, Jr. has been assassinated and are incensed with rage until Norman refocuses their fury. None of them wants to be in this war, Norman says, as the others despair at the thought their friends and family being murdered for being black in the country whose freedoms and values they are supposed to be serving. The complexity of being a black soldier serving an imperialist state sits at the heart of Da 5 Bloods, a central idea which grows as intricate as you would expect.

Two French supporting characters reflect the juxtaposing relationships that white people from colonial countries can have with their national history. The Vietnamese characters leave a little more to be desired, their agency slightly out of scope for a film that has so much going on already. Lee clearly has their grievances in mind, but he draws too neat a line between their postcolonial struggle and the racism black people face in the West. It is an appealing demonstration of solidarity but the film does not quite do enough to convince its audience that they deserve such close comparison when their contexts retain key differences. Yet, perhaps predictably, the Vietnamese presence here is a marked improvement from their facelessness in the seminal Vietnam film, Apocalypse Now. Few Hollywood films have considered racism so thoroughly, in such varied times and contexts. No other American filmmaker is willing to make a film which shakes them all together and tackles them so unflinchingly.

Lee is helped ably by his cast, chiefly Delroy Lindo as Paul, whose loosening grip on reality leads to the film’s emotional high point and forges its most potent connection to current politics. Spike Lee would be the director to eke out so much mileage from the imagery of one particular red cap. Superficial context be damned, he will force you into thinking about how persistent the battle for justice is. He intercuts horrific imagery of the damage done in Vietnam with anti-racism speeches from Angela Davis and Muhammad Ali. You may not like confronting it, he tells his audiences, but he isn’t going to give you a choice. The third act is one of his biggest combustions to date, a visceral and sometimes overwhelming turn into quasi-mania which is even more terrifying because it is so grounded in the reality of racism and colonial legacy. Da 5 Bloods may be an imperfect vehicle but Lee’s ideas remain as urgent as ever.

Spike Lee’s Da 5 Bloods is an exhilarating and timely story about imperial legacies with a great central performance from Delroy Lindo.

Looking for more dramas to watch? Check out these reviews from Redbrick Film: