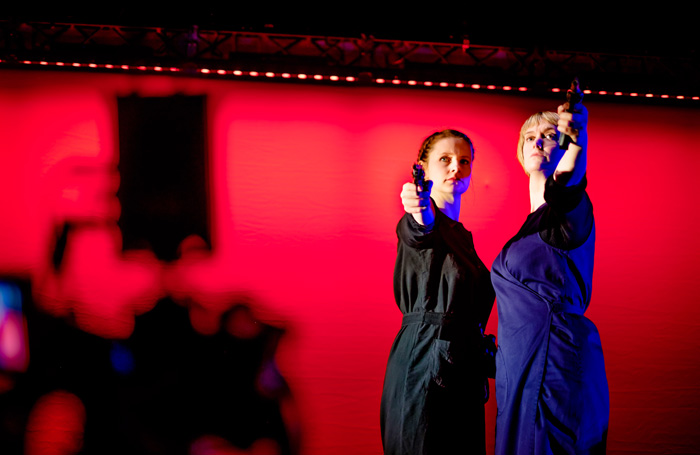 Performing is daunting, no matter what the material. The myriad ways in which an audience member might react to your work is enough to make you give up before you’ve started: one person’s pretentious is another person’s genius; one person’s subtlety is another person’s lacklustre. For experimental theatre, the issue of appealing to the crowd takes on a new dimension. Should the crowd always be walked through the performance, led from scene to scene in a handhold that leaves little room for interpretation so that when they leave they know that they “got” the play? Or should they be left stunned, uncertain and with more than a few questions? These are question for a far more experienced writer than me, but they are also questions I watched being answered at The REP’s performance of Joseph Conrad’s 1899 novella Heart of Darkness, innovatively adapted by imitating the dog theatre company.

When we speak of Heart of Darkness, we speak of colonialism and debate how best to artistically represent such horrors. A now canonical text centred on a European travelling down the Congo River in search of the enigmatic Kurtz, a man who has lost his mind in a frenzy of power-mad colonialist violence, Heart of Darkness has been praised for its devastating criticism of the evils of colonialism. Crucially, however, it has also been condemned for partaking in the colonialist narrative that portrayed Africa as the titular darkness in opposition to Europe’s light. imitating the dog are well aware of this controversy and, far from running from it, they cleverly made the debate a central plot point, by staging the performance as a show within a show. This manoeuvre was highly successful in exposing what I had previously understood to be a revolutionary, liberal novel as something far more worryingly of its time. By performing the rehearsal stages of the show and the debates over portraying the protagonist Marlow as an African woman and the setting as Europe to expose the true darkness as capitalism, the company brought contemporary debates about right wing political extremism in Europe into a text which initially seemed to have nothing to do with our time. When laid out like this, in a move which could so easily have been patronising, the audience instead navigated the shift in perspective which the performance required without issue.

As bold as the performance was in content, the creative use of technology –including the projection of clips from the film adaptation Apocalypse Now and Boris Johnson looking as dependable as ever on a zip wire and the livestreaming of the actors onto screens above the stage– ensured that Heart of Darkness truly became modern. Despite a few technical glitches which questioned whether or not the two live cameras, green screen and three t.v screens were perhaps a step too far, the overall effect was riveting. Disorientation abounded as the audience struggled to know where to look, in just the same way as Marlow is left utterly disorientated by the alien land of desolate, desperate Europe. At times the actors were overpowered by the sheer volume of technology onstage, particularly in the more minor ensemble roles. However, standout performances were given by Keicha Greenidge as Marlow and Matt Prendergast as Kurtz, particularly in the disturbing final scene.

The question remains, but imitating the dog has certainly thrown its opinion into the mix: daring theatre should challenge, create pathways for discussion and avoid comfort at all costs. This energetic, unsettling and ultimately harrowing play was not the kind of art to snuggle up to, it was the kind of art that jolts you awake, a worrying and worthy alarm clock for our times.