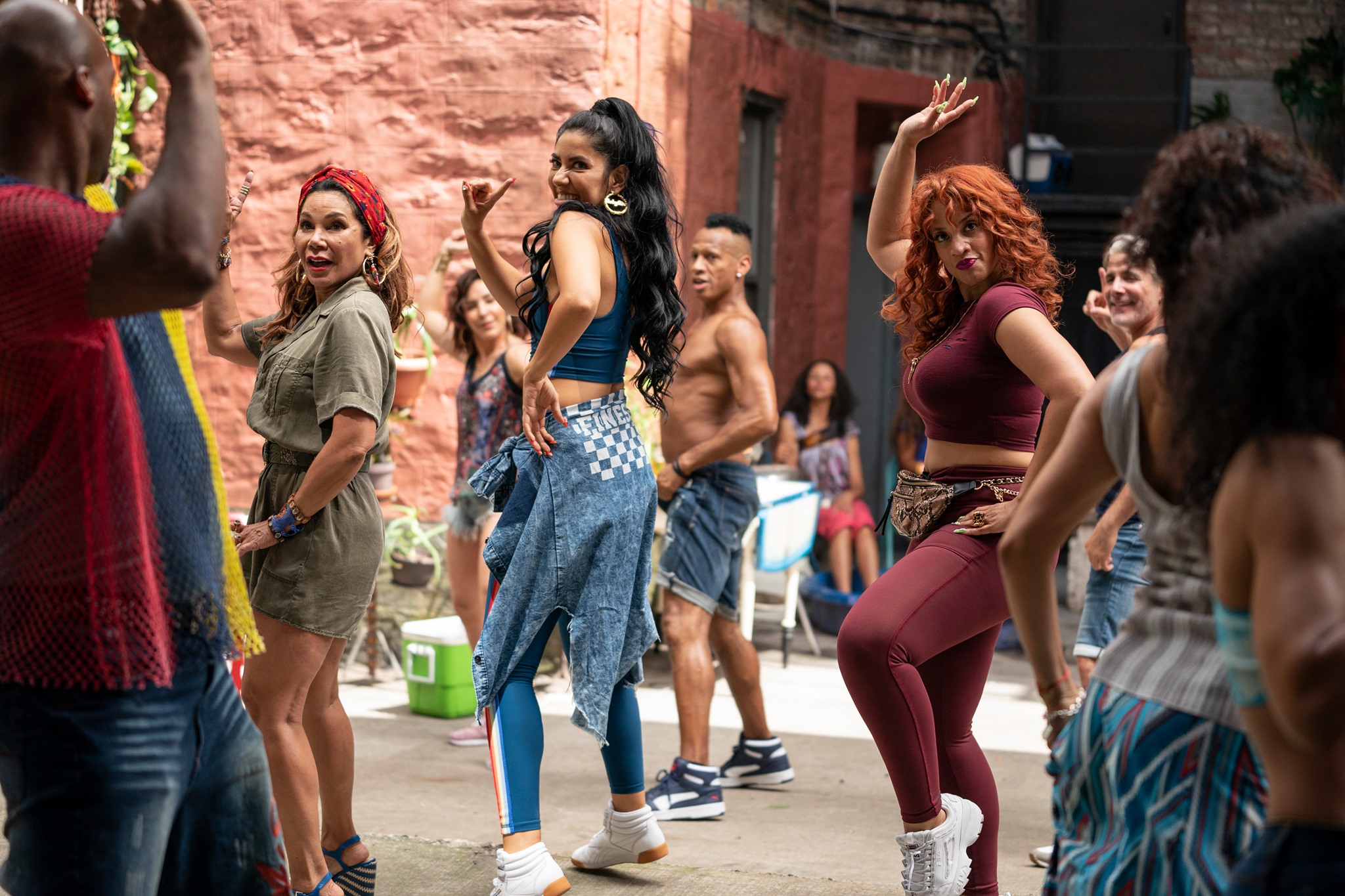 Gentrification: the age-old story of lifelong residents getting forced out of their neighbourhoods by outsiders who completely change the community. In The Heights follows the story of Usnavi, the owner of a small bodega in Washington Heights, as he watches the neighbourhood he grew up in disappear around him as the community gets priced out. As the film adaptation of Lin Manuel Miranda’s first musical, director Jon M. Chu (best known for Crazy Rich Asians) does justice to the original whilst successfully updating it to resonate with 2021 audiences. In The Heights is a fun, upbeat, yet poignant story of the Latin American community in New York City.

Usnavi (Anthony Ramos) runs a small bodega in Washington Heights with the help of his teen cousin Sonny (Gregory Diaz IV). The tight-knit nature of the community is clear from the beginning: the opening sequence shows Usnavi meeting his friends and neighbours as they visit the bodega to pick up their daily staples: a lottery ticket and café con leche. This is a community where everyone knows everyone: the younger generation were raised together, and the older generation all played a role in helping raise them.

The events of In The Heights span over one single, unimaginably hot summer, with temperatures reaching record highs and blackouts causing a complete lack of air conditioning. In The Heights weaves together the stories of many individuals in the neighbourhood: Nina (Leslie Grace), who has returned to Washington Heights after a difficult year at university, rekindles the spark with her childhood sweetheart Benny (Corey Hawkins). Salon owner Daniela (Daphne Rubin-Vega) struggles with having to move her shop to a different neighbourhood due to the ever-increasing rent prices, while her employee Vanessa (Melissa Barrera) struggles to achieve her dream of leaving the neighbourhood and setting up her own fashion studio. All the while, the residents band together around their community’s matriarch, Abuela Claudia (Olga Merediz), as they try to achieve their sueñitos (little dreams).

Perhaps one of the most impressive feats of the film is that the majority of it was filmed on-location in Washington Heights, New York, creating an authenticity in the setting that would be hard to replicate in a studio. Filming a musical about the beauty of your local community within the community itself is a truly special choice. The audience fall in love with the real-life Washington Heights as the characters sing about why they love their community. Moreover, true to the musical’s message of fighting gentrification, the production spent $1 million employing local businesses whilst filming! The authenticity of the setting is paired with beautiful cinematography (the work of cinematographer Alice Brooks) that captures the warmth and vibrancy of a hot summer’s day in the city. Visually, In The Heights is a masterpiece and is a perfect film to return to the cinema for.

The cast performances are impressive across the board. With musical theatre veterans such as Olga Merediz as Abuela Claudia (reprising her role from the original Broadway run) and Daphne Rubin-Vega as Daniela, this star-studded cast puts on an awe-inspiring performance. Those familiar with the stage are joined by newcomers to musical theatre, such as Stephanie Beatriz as Carla (best known for her role as Rosa on Brooklyn 99). Every member of the cast brings a crucial piece of talent to the film, irrespective of their prior experience. Whilst each performance has its merits, Stephanie Beatriz’s performance as hairstylist and local gossip Carla is particularly impressive and demonstrates her diverse range as an actress, as this character is the polar opposite of her familiar role in Brooklyn 99!

The result of the cast’s combined talents culminates in the fantastic soundtrack, where each song is so full of life and heart. Being an adaptation of a musical, one would hope that the cast would be strong vocally, but the strength of the soundtrack is still a very pleasant surprise. Not only this, but each song performance has an amazing cinematic quality. From the fantastic introduction, with the titular song ‘In The Heights’, to the exciting yet heart-wrenching firework-filled performance of ‘Blackout’, each song is an entertaining viewing experience. Discussion of the music performances would not be complete without mention of impressive rendition of ‘96,000’ filmed over two days at New York’s Highbridge Pool, where each character imagines what they would spend hypothetical lottery winnings on, complete with synchronised swimming and slick choreography. Each performance is so full of life and excitement, it is impossible for the audience not to experience the joy of the characters on screen.

In The Heights is not a straightforward performance of the theatre version; director Jon M. Chu expertly adapts the original story to ensure it translates well to the screen. Fans of the original musical may be disappointed at the choice to cut songs such as ‘Sunrise’ and ‘Everything I Know’, as well as the mysterious choice to remove the role of Nina’s mother. Some changes were necessary for bringing the musical up-to-date with the experiences of the Latin American community: highlighting the issues of racial profiling, micro-aggressions, and the struggles faced by undocumented immigrants. Overall, despite the changes, the film adaptation is certain to please even the most diehard fans of the original!

In The Heights serves as a shining example of what film adaptations of popular musicals can achieve. If you can catch it in the cinema, In The Heights is a perfect choice for returning to the big screen in person now that cinemas are opening up again! After its initial release being postponed due to Covid, In The Heights exceeds expectations and is certainly worth the wait!

In The Heights is out now in cinemas.

Fan of musical films? Have a look at these reviews from Redbrick Film: