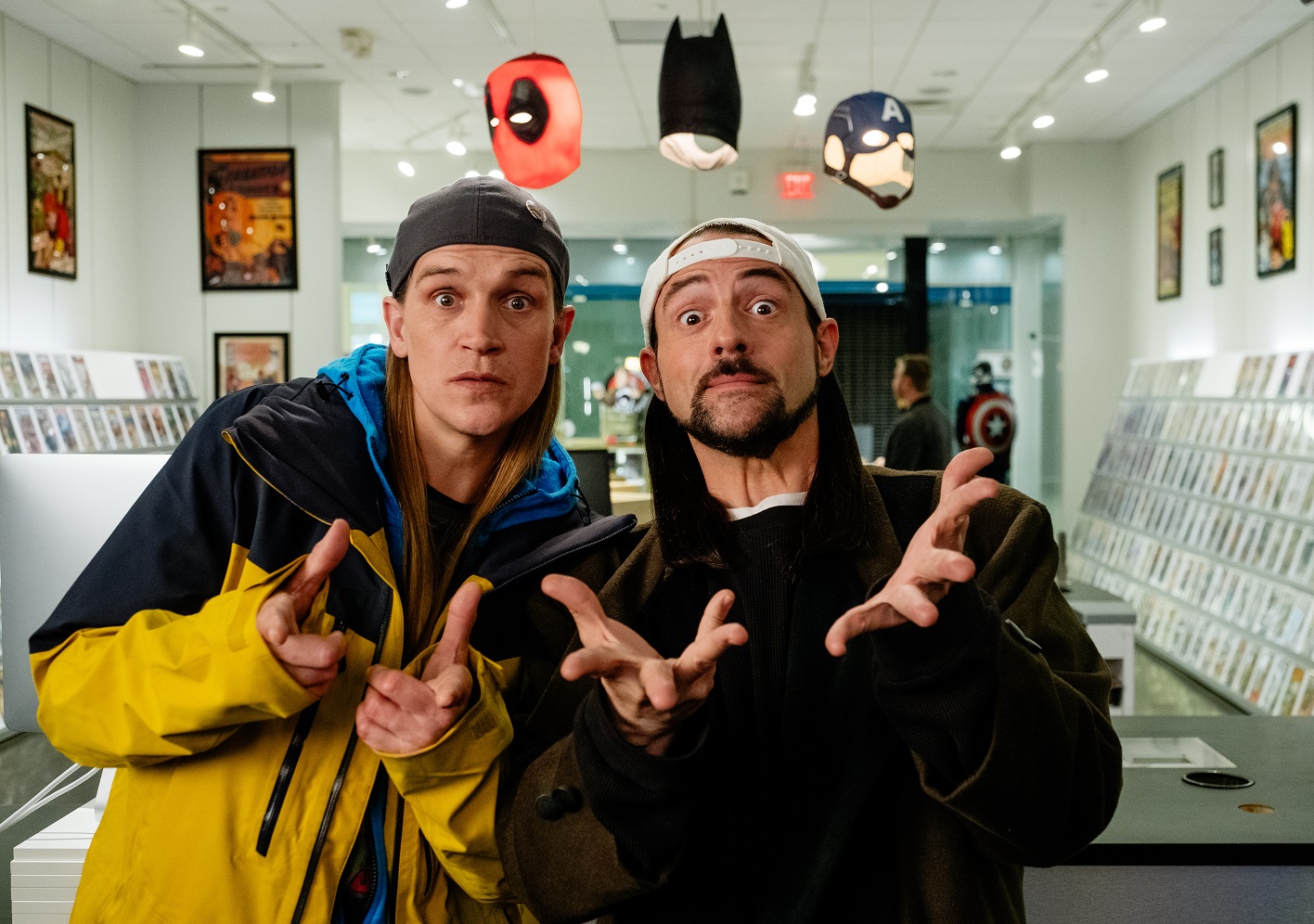 Film Critic Peri Cimen is overjoyed and heartwarmed by the return of Kevin Smith and his usual cast of characters, admitting that it may not be for everyone, but is an absolute joy for fans of his films

Whether you love him or have no idea who he is, Kevin Smith has had an interesting career to say the least. Best known for his 1994 indie debut Clerks– which was filmed on an impressive $27,575 budget – Smith has since become a pioneer of independent filmmaking and a cult movie icon for his slacker comedies. His latest film, Jay and Silent Bob Reboot (yes, that’s the title), is laugh-out-loud funny and sees the famous stoners Jay and Silent Bob return to the big screen as immature as ever. Although it’s targeted largely towards his existing audience, there’s a valiant effort on Smith’s part to parody the Hollywood reboot/remake culture whilst staying true to his own directorial style.

Jay and Silent Bob Reboot is the seventh film in the View Askewniverse, the shared universe in which Kevin Smith’s early films take place. Their unifying feature? Jay and Silent Bob. The drug-dealing duo, played by Jason Mewes and Kevin Smith respectively, appear in Clerks, Mallrats, Dogma, Chasing Amy, Jay and Silent Bob Strike Back and Clerks II, offering weed and wisdom to everyone they meet. Originally a cameo for Smith and his best friend in Clerks, Jay and Silent Bob became prominent characters in his later films due to their popularity, eventually taking centre stage in the slapstick road trip comedy Jay and Silent Bob Strike Back. The 2001 film sees the duo travelling to Hollywood to stop a movie being made out of their likenesses — the comic-book characters ‘Bluntman and Chronic’ created by Holden McNeil (Ben Affleck) and Banky Edwards (Jason Lee) in Chasing Amy. It’s full of celebrity cameos (from the likes of Carrie Fisher and Mark Hamill) and call-backs to Smith’s earlier films; this is also a trademark of his latest feature.

In Jay and Silent Bob Reboot, Jay and his ‘hetero life-mate’ Silent Bob must once again travel to Hollywood to stop the reboot of the original ‘Bluntman and Chronic’ film. By Smith’s own admission, it’s the first film all over again… only this time, Jay’s about to find out what it means to be a father. After being reunited with his ex-lover Justice (Shannon Elizabeth), Jay is told that he has an 18-year-old daughter named Millennium Faulken (played by Smith’s own daughter, Harley Quinn Smith). Millennium is just as audacious and foul-mouthed as her dad but is kept in the dark about who he is. Nonetheless, she threatens Jay and Silent Bob to take her and her friends to ‘Chronic Con’ with them and they comply, but the question remains – will Jay accept his role as a father or keep Millennium none-the-wiser?

Jay and Silent Bob Reboot might be a little self-indulgent, but that seems to be the point. Tonally, it hits the comedy mark and delves into a new world of responsibility for Jay and Silent Bob. It draws attention to itself for what it is, displacing 90s veterans Jay and Silent Bob in a world of touchscreen phones and movie reboots. But the film is, refreshingly, about much more than meets the eye. Aside from the self-reflexive comedy and celebrity cameos, it’s a film about fatherhood. Smith hasn’t just copied his own formula for the sake of parodying reboot culture, he’s added a sprinkle of heart and, as always, found a way to represent his own experiences on screen in a way that makes us all chuckle (but I’ll admit, I might have shed a tear, too).

The first act feels somewhat disjointed, but the film, and the comedy, really pick up and come into its own as it progresses. There also doesn’t really appear to be a resolution to the foundational plot, but this does not affect the viewing experience in any way. This is largely due to Jason Mewes, who delivers his best performance as Jay to-date. For 25 years, Mewes has been the face (and voice) of Jay and Slient Bob, but he really proves throughout Jay and Silent Bob Reboot that he deserves to be. Equipped with his familiarly absurd lexicon (‘Snoochie boochies!’), his command on screen is hilarious and hard to ignore. He’s toned it down a little, and this makes all the difference to the maturity of Jay’s arc this time around.

Because of this, and because of all of the cameos and references to Smith’s other films, Jay and Silent Bob Reboot feels like a love letter from Smith to his 25-year career. Following the serious heart attack he experienced in 2018, it makes sense. Why wouldn’t he want to make a film full of his old friends? I’m glad to report that the cast and characters still share the same chemistry they had during the late 90s, bouncing off of one another with the same exuberance (and the added bonus of nostalgia). In many ways it felt like a family reunion, complete with tongue in cheek references to the actors’ best-known films and performances outside of the View Askew bubble.

It was hysterical to see some of these returning actors embrace their goofier sides as well. After the release of Le Mans ’66, Matt Damon’s reappearance as Loki, the fallen angel from Dogma, stands out in my memory as being particularly charismatic, albeit very silly. There are also several homages to the late Stan Lee, including a posthumous appearance by the legend himself in a post-credit scene, which is undeniably of the most touching moments of the film. Fans of How High and the comedy duo Cheech and Chong will also be pleased to know that there are also some hilarious encounters with Redman, Method Man and Tommy Chong, as an homage to stoner comedy classics.

It was uncertain for a while whether or not Ben Affleck would appear in the film and reprise one of his many roles, but I’m thankful he did; the best scene in the film is a monologue he delivers as Holden McNeil. Smith had already began filming when Affleck agreed to be a part of the film, and so it was filmed after everything else was already done. Suffice to say, his absence would have been devastating. In a manner not unlike Silent Bob’s story about ‘Chasing Amy’ in Chasing Amy, Holden discusses the sacrifices that parenthood entails in a genuinely perceptive way, reminding us how good of a writer Kevin Smith can be. The scene ties the narrative together, marks a turning point in Jay’s story and bridges the second and third acts of the film; it seems ridiculous now that it was ever an afterthought.

Kevin Smith himself is not a conventional director by any means, but his unwavering cinematic presence stems from his all-encompassing optimism. He edits his own films, casts his friends and family members, and keeps his loyal fanbase updated on every project en route; he stays consistently true to himself, his brand and what he loves to do. As a result, you really can feel the love that goes into every single one of his films – even the sure-fire misses. But of course, like any director with a cult following, his films are not for everyone. They can be quite brazen, ill-mannered and sometimes feel outdated, all of which are certainly true of Jay and Silent Bob Reboot at times. Even so, I strongly suggest giving them a try. Among other things, Smith is admirable for the candidness of his films, reflecting the same playful way he approaches life.

I was lucky enough to meet the man himself at London Film and Comic Con (LFCC) in 2017, and as I stood in a crowd of Jay and Silent Bob and Mooby’s cosplayers, it struck me how broad his appeal really is. People of all ages were standing around, laughing and joking about his films and his other projects, such as his YouTube videos and podcasts; the sense of community was astounding. Luckily for me, I had worn the same hockey jersey as him and made a joke about one of us having to change. Much to my surprise, he suggested we pose in the same way for our photo-op and was overjoyed that I’d bought one of his self-branded shirts, even thanking me for it. It was undoubtedly an electrifying experience, but is also a perfect example of how much Smith appreciates his fans and the community he’s created, on and off-screen. He’s found the perfect way to solidify himself in the pop culture canon whilst remaining staunchly outside of the mainstream, maintaining a tight relationship with his fans on top of all that. Regardless of how you feel about him or his films, he’s definitely been doing something right all these years.

With the promise of Mallrats II and Clerks III, Jay and Silent Bob Reboot is the perfect reintroduction of beloved Kevin Smith characters back into the pop cultural climate ahead of the next decade. It’s anything but polished, but Smith proves he’s still got the knack after some misfires (I’m looking at you, Yoga Hosers), leaving his fans desperate for what’s next.

Whether or not Jay and Silent Bob Reboot is a good film is far more difficult to qualify than whether or not I enjoyed watching it, and the latter is undoubtedly true. As an existing fan, it surpassed my expectations, and is certainly worth watching for those who want an idea of what Kevin Smith is all about; making films and having fun.

Jay and Silent Bob Reboot is available on DVD and Blu-ray from January 20th.