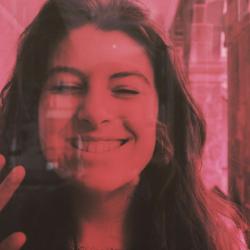 As I’m sure we’re all aware, Joe’s has created a new menu this academic year.  It appears to be quite varied, with nothing too fancy, but that’s no bad thing – Joe’s has always been able to boast a modest, enjoyable, and relatively affordable menu, perfectly suited to its student demographic, which by the looks of it, is something they can still lay claim to.  Whilst it may be sad to see the various chip toppings disappear (R.I.P. curry sauce), sides like curly or sweet potato fries make up for this.

So last week, I decided to have dinner there before a night in the library.  After much deliberation, I chickened out of ordering the “very spicy” vegetarian Singapore Noodles, and opted for the Veggie Burger instead, containing fresh lettuce, tomato, and red onion, completed by Joe’s own burger sauce (whatever that is).  I decided to upgrade to curly fries for just 75p, and ordered a Sol to wash it all down.

However, when it arrived, I was a little disappointed by the look of the food.  The dry-looking burger bun dwarfed the dry-looking patty, and reminded me of those floury buns served from school canteens.  Upon closer inspection, there was actually a surprise, solitary chip hidden in my burger, so I’m not sure what to make of that – I like chips, but I didn’t order them with, or in, my burger.  The salad, however, looked fresh and colourful, which helped improve the underwhelming look of the dish.  The curly fries were also an appetising golden brown, as they should be, so not all was lost at this point. The sauce, a salmon-orange colour, looked slightly off-putting, but I’ve never been one for pinkish foods, so it might be appealing to others.

If the look of it wasn’t enough, my first bite was somewhat of a let down.  Tasting barely different to a chip-shop veggie burger (yet costing more than double the price), I wished I’d been brave and tried the Singapore Noodles after all.  There was a lot of potential flavour packed into this burger, yet it somehow tasted like it wasn’t doing much at all.  I barely got a hint of the fresh salad over the mass of mush from the rest of the food, yet I can’t describe the taste of the sauce or the patty, which were just lacking in flavour and texture overall.  The bun was also bland and dry, so when teamed with the stodgy patty, it was quite difficult to manage without a drink.

Overall, I was disappointed with this new veggie option, but I hope this can be put down to how new the menu is – maybe Joe’s can work on improving the recipe, as at present, it tastes like a mushy, bland rip-off.  Whilst Joe’s will never be a fine-dining venue (and that’s fine by me!), they can at least serve a veggie burger better than one I could pick up just 10 minutes away in Selly, for half the price.  At least the curly fries were worth an extra 75p.