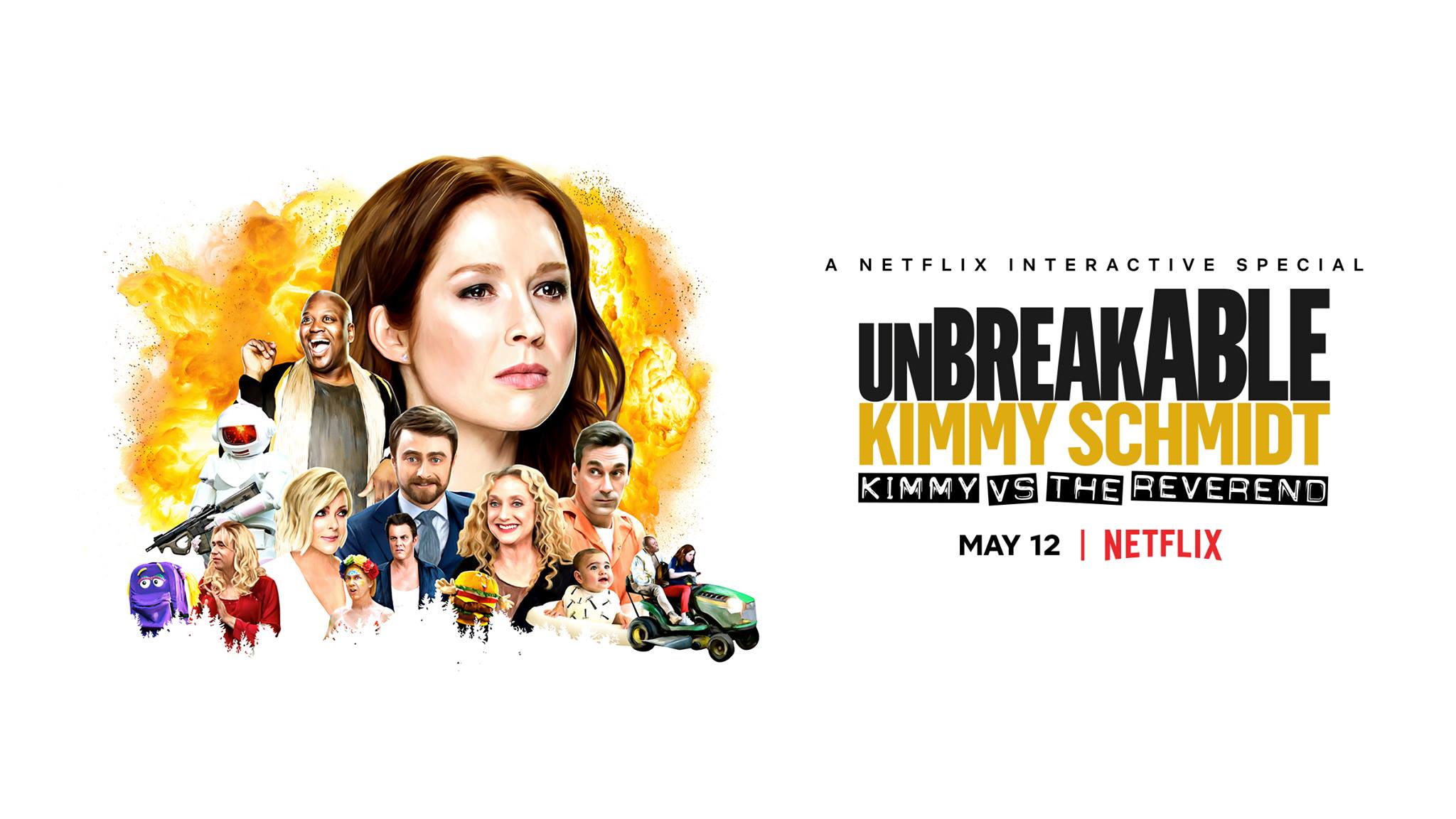 Review: Kimmy vs. the Reverend

Written by susiecreasey
Published at 12:30 on 17 June 2020
Images by Unbreakable Kimmy Schmid @ Facebook

Unbreakable Kimmy Schmidt: Kimmy vs. the Reverend is Netflix’s yet another foray into interactive programming after Black Mirror: Bandersnatch. Funny, heartwarming, and quirky, the show builds vastly on the ideas of its predecessor to prove that comedy is perfectly matched with an interactive format.

The programme is set after the events of the first three seasons, and as a result, it is essential to have watched them before this one-off special, which jumps straight into the action with Kimmy (Ellie Kemper) finding a choose-your-own-adventure book and suspecting it might have belonged to another undiscovered ‘mole-woman’, then setting off to confront the Reverend (Jon Hamm).

However, the interactive element means the viewer controls how the story develops from the start, by pressing buttons that appear at the bottom of the screen at poignant moments in the show. The scene you are taken to next depends on what option you picked, meaning there are many different storylines, and therefore outcomes, to Kimmy’s adventure. This type of viewer participation, still a novelty on our screens, works to create a deeper sense of engagement with the programme as the viewer creates a ‘bespoke’ story for themselves and the resulting unpredictability of where  Kimmy vs. the Reverend takes you next is one of the reasons this show is so fun to watch.

One of the best aspects of Unbreakable Kimmy Schmidt was the vast array of oddball characters – and all the fan-favourites from the original seasons return for this one-off special, as well as some equally eccentric new ones. Titus (Titus Burgess) steals many scenes with his diva-like personality and snappy remarks. However, the star of the show is Kimmy herself. Kemper beautifully balances Kimmy’s childlike wonder and unbridled optimism with a steely determination to help others, characteristics that continue to make her a likeable and sympathetic protagonist. Jacqueline (Jane Krakowski) and Lillian (Carol Kane) are perhaps not used to their full comic potential, inhabiting smaller subplots, but Daniel Radcliffe is a hilarious addition to the cast as Prince Frederick, Kimmy’s fiancée and a clueless British aristocrat.

Arguably Kimmy vs. the Reverend is a greater creative success than its predecessor, Bandersnatch. In Bandersnatch, making choices often transported the viewer to different story-lines that had no connection to the pre-existing plot they had been shown, causing confusing inconsistencies in the story arc. However, the comedy style of Unbreakable Kimmy Schmidt is already absurdist and works perfectly with a structure that does not necessarily make logical sense; the nonsensical ways the plot progresses to an ending only add to the show’s humour.

Moreover, characters comfortably break the fourth wall; after one choice which seemingly leads the show to end ten minutes in, Kimmy asks ‘Why did we only fly Radcliffe in for one scene?’, an example of meta-commentary and self-awareness which works excellently in comedy, but would not have fit in with the serious tone of Bandersnatch, restricted by its loyalties to realism.

The comedy in Unbreakable Kimmy Schmidt has always been excellent, a mixture of contemporary satire, wordplay and general silliness, and here it is put to especially excellent use in the gaps which occur when you are choosing an option. Instead of awkward and disconcerting pauses like those in Bandersnatch, spaces are filled with a joke of some kind, continuing the flow of the story. Overall the comedy genre and the interactive format merge brilliantly as the writers are not constricted to maintaining the integrity of narrative truth, and thus Kimmy vs. the Reverend blurs the boundary between viewer and screen further than ever.

The viewing experience of Kimmy vs. the Reverend is wholly positive, and far less draining than that of Bandersnatch. Bandersnatch seems designed to draw its controller into a spiral of evil decisions, and the multiple ensuing endings, all negative, leave the viewer to reflect on the terrible consequences of their choices and a little bit horrified by their own behaviour. Contrastingly, Kimmy vs. the Reverend is designed to guide you towards the moral option.

When a choice takes Kimmy further from her goal of finding the kidnapped women, characters will pop up on the screen and send you back to redo the section, often with commentary or explanation as to why. I found the endings I reached more satisfactory than the myriad of ambiguous Bandersnatch endings, not just because they were more conclusive, but because I felt I had earnt them by making good choices on behalf of the characters.

Additionally, after ending one story, an option appears on screen to go back to the beginning and redo. Although people constantly revisit their favourite comedies for a sense of nostalgic comfort, in Kimmy vs. the Reverend there is an exciting twist to repeat watches. Choosing different options reveals new sketches, scenarios and jokes, so although the fundamental story remains the same, the content is slightly different each time, adding an element of unpredictability to the show which traditional comedy lacks.

It is extremely refreshing to re-watch a comedy show and for once not know all the punchlines. I am excited to see how this technology could be developed for comedy in the future, while shows like Friends have always experimented with ‘what could have been’ episodes, Kimmy Schmidt vs. the Reverend shows these could be expanded to include multiple alternate realities, pioneering the way towards a new form of comedy.

Overall, Kimmy vs. the Reverend is a feel-good romp that pushes the boundaries of viewer participation in various novel ways. The interactive element genuinely added to the episode and did not seem like a gimmick, proving the format works perfectly with comedy by adding fresh opportunities for the writers to create innovative comic moments. Most importantly, the interactivity emphasises the original message of Unbreakable Kimmy Schmidt, reminding us to always strive to do the right thing, even when we have the choice not to.

Looking for a laugh: Check out more comedy shows here: