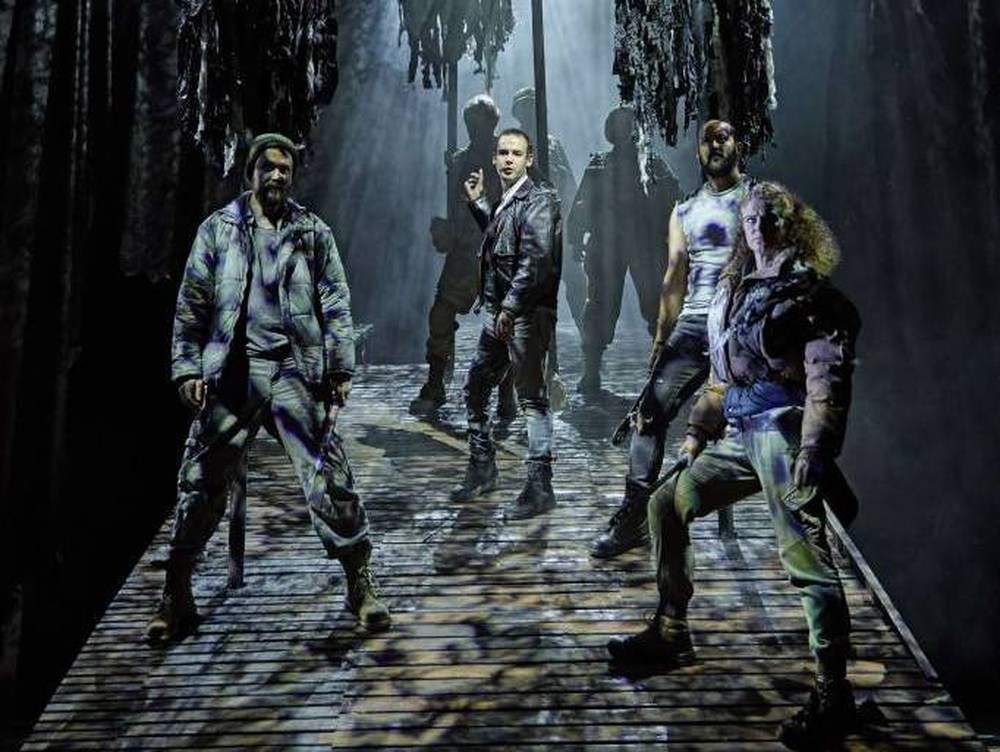 Review: Macbeth at the Wolverhampton Grand

Fair is foul and foul is fair. This simple line is perhaps the closest Shakespeare came to providing his audience with a mission statement for The Scottish Play. This timeless tragedy is an inversion of expectations, from the prophecy that Macbeth will be a barren king, to Lady Macbeth’s desperate cry to be unsexed, to trees marching in military formation. The headiness and heat of the play is unparalleled. It is a shame then, that Rufus Norris’ National Theatre production, now playing at the Wolverhampton Grand, kept the pulse of over-heated testosterone flowing, but failed to acknowledge the magic and mystery that should cloak any performance of Macbeth.

Set in what appears to be a contemporary or nightmarish nineties Civil War Scotland, Norris’ Macbeth is bare and deeply impactful, but decidedly lacking in subtlety. Michael Nardone’s Macbeth is a fairly standard tough-guy Scot you wouldn’t want to meet after he’d had a wee dram or two. From the opening, in which a battle-weary Macbeth beheads an opponent, this play has none of the milk of human kindness, and all the vaulting ambition to go deep into the heart of political corruption. But this play needs contrasts. If Shakespeare says the castle has a pleasant seat, then make it pleasant. He did know what he was talking about. The nuclear fallout shelter/warehouse rave setting of the Macbeths’ home is lacking in any intimacy that makes you believe that these two love each other as much as they profess: this has surely never been home to a loving family, but always a headquarters for ambitious usurpers.

It can feel almost sacrilegious to criticise the National Theatre, and indeed this remained an excellent performance. The school children in the audience cheered in response to the onstage kisses of Macbeth and Lady Macbeth (played by a powerful Kirsty Besterman), proving that the heat of the play worked. The fights were vicious and the lewd humour of the Porter was blatant enough to shake off any notion of Shakespeare being stuffy. But Macbeth needs a sense of place. In the tension between the Scots and the English, in the landscape of the Highlands, this is a play tied to place. I’m all for adaptation, but please show the audience why you made those changes. Macbeth is famous for reflecting timeless truths about politics, but it works best if it shows you this timelessness within a specific location. From the many gangster adaptations, to Akira Kurosawa’s film adaptation set in feudal Japan, to the lines that crop up in politically tense moments of Lin-Manuel Miranda’s Hamilton, historical adaptation can be highly effective when it proves the universality of the play’s emotions. But Norris’ world failed to go beyond the aesthetic. Rather than being set in a concrete location which justified why men and women would go into battle over the land, it felt as if what we were watching was set in a violently beautiful mood-board of future humanitarian crises.

A word on the witches: no doubt one of the play’s strongest features (quite literally, they clambered up trees and hung from them acrobatically throughout lengthy stretches of dialogue). The witches were played as the kind of demon you would see in a modern horror film, all unnatural vocal rhythms and eerily synchronized movements. It was an undeniably shrewd move by Norris to have them seem to fly as they slipped down the trees into the realm of the human characters. They brought back the supernatural and surrealism of the play and it was all the stronger for it.

If foul is fair then this was a beautiful performance. Its aesthetic vision may not have been entirely convincing, but it was certainly provocative and communicated well the masculine militarism at the heart of the play. I just would have liked to see a little more of the fair.