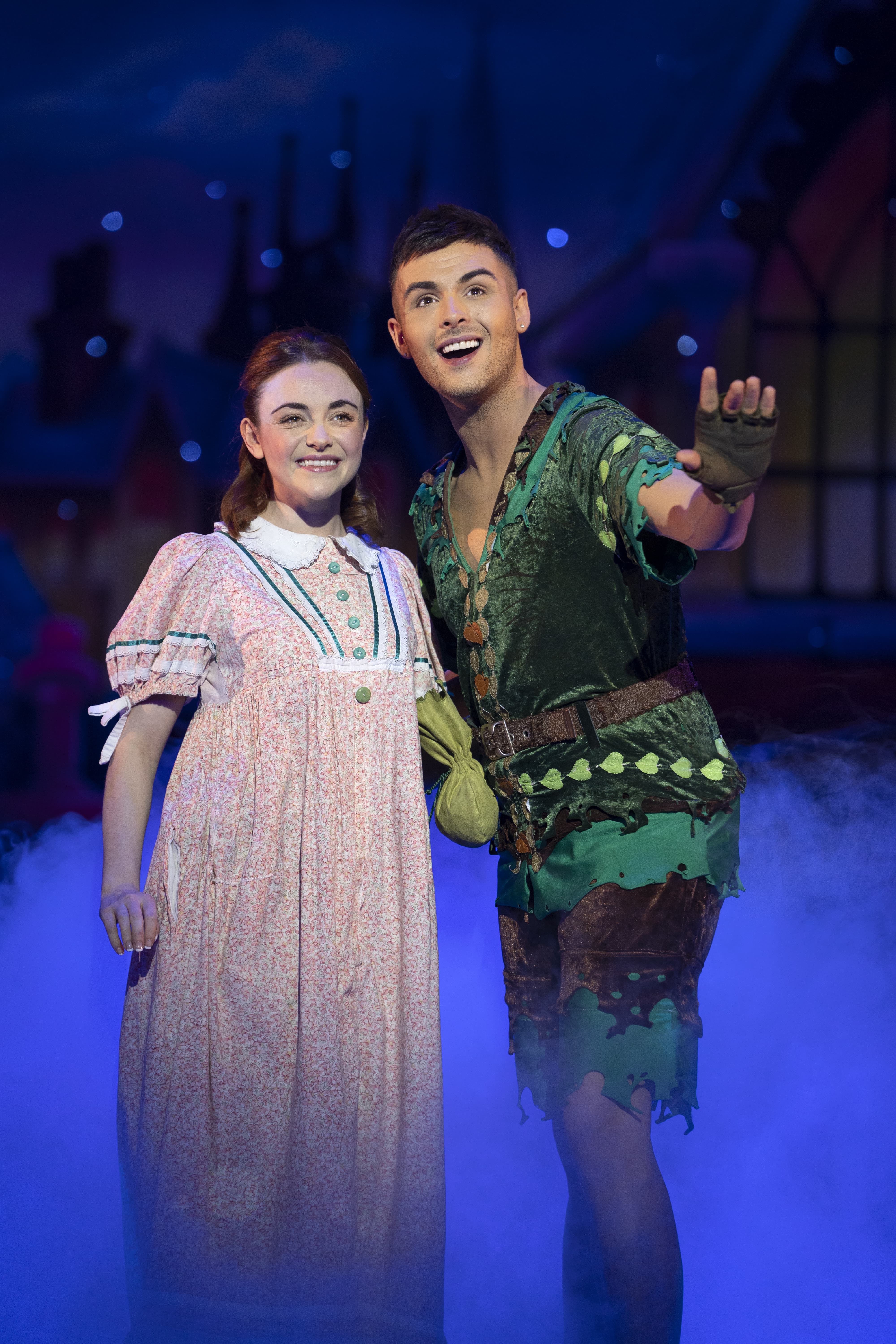 The overture begins, an excited hush descends on the audience, and the curtain rises on Peter Pan: this year’s pantomime offering at the Birmingham Hippodrome. With a star-filled cast, astounding production design and sparkling humour, it proves to be a hit for all the family.

The Darling Children play on the rooftops of London, desperate for an adventure to Neverland. Enter Peter Pan (Jaymi Hensley) and his fairy Tinkerbell (Kellie Gnauck), who transport the children to Neverland. What follows is an adventure with everything from a Magical Mermaid to Captain Hook, a crocodile and some astoundingly magical performances.

The cast is uniformly wonderful, bringing real pizzazz to the Hippodrome stage. Hensley is in fine voice as Peter Pan, showcasing some brilliant vocals and charm as he flies around the stage. Kellie Gnauck and Cassie Compton also sparkle as Tinkerbell and Wendy, both vocally excellent and firm favourite of the audiences.

Meera Syal, comedic and theatrical legend, makes her panto debut here as the Magical Mermaid, and a blooming good debut it is too. She’s well-loved by the Brummie audiences (her little Brummie barnacles), with a veritable ocean-full of fish puns, and her rendition of a rewritten Cell Block Tango is great fun.

Jimmy Osmond is devilishly good as Captain Hook, the dastardly pirate nemesis of Peter Pan. Osmond is brilliantly convincing both comically and villainously, even when he, to the hysterical delight of the audience, accidentally removes his glued on moustache. He also improvises some of the show’s more hilarious unscripted moments and is definitely a panto force to be reckoned with.

However, star of the show is Matt Slack as Smee. Returning for his sixth panto with the Hippodrome, Slack has become a yearly staple of the panto here, and for good reason. He’s the heart of the show, witty in every moment and as funny in his physicality as in his line delivery and improvisation. He’s not afraid to tell the many cheeky jokes aimed at older members of the audience, to ham it up and break into laughter at his own lines, or to break the already transparent fourth wall to chat directly to the audience about the action on stage. In short, Slack is the Hippodrome panto, worth the ticket price alone.

The panto also displays the high quality that has come to be associated with QDOS Entertainment. The costumes sparkle, the sets are sumptuous and a visual delight, and there are some truly magical moments of stage craft such as the appearance of the crocodile, a moving pirate ship, and a flying moped.

Magical too are the inclusion of the Timbuktu Tumblers, who bring acrobatic prowess to the Hippodrome stage, as well as Sascha Williams and Stephanie Nock, whose Rola Rola act has some audience members gasping out loud at the gravity-defying display. Though these acts do little to serve the plot (indeed, sometimes the show feels a little disjointed as a result of some of these more tangential scenes), they provide a great delight to audience members of all ages, which is surely what pantomime is all about.

There are all the traditional panto moments too, minus perhaps a dame. There’s a sing along (B.R.U.M!), some big dance numbers, very Brummie humour, and a great moment in which one child, invited on stage to take part, declares he is from ‘the bottom of Redditch’, spontaneously bringing the audience into roars of laughter. Such is the magic of pantomime – every show is different, and sometimes the audience is just as brilliant as the show.

Peter Pan is sure to delight all this festive season. With a smashing cast and roll on the floor funny jokes, it’s a delight not to be missed. Peter Pan runs at Birmingham Hippodrome until Sun 27 Jan 2019.

Editor’s Note: Since the time of review, Darren Day has joined the cast of Peter Pan in the role of Captain Hook, replacing Jimmy Osmond after Osmond was taken ill and hospitalised. We wish all the best to Jimmy Osmond in his recovery, and to Darren Day in taking to the stage in this production.