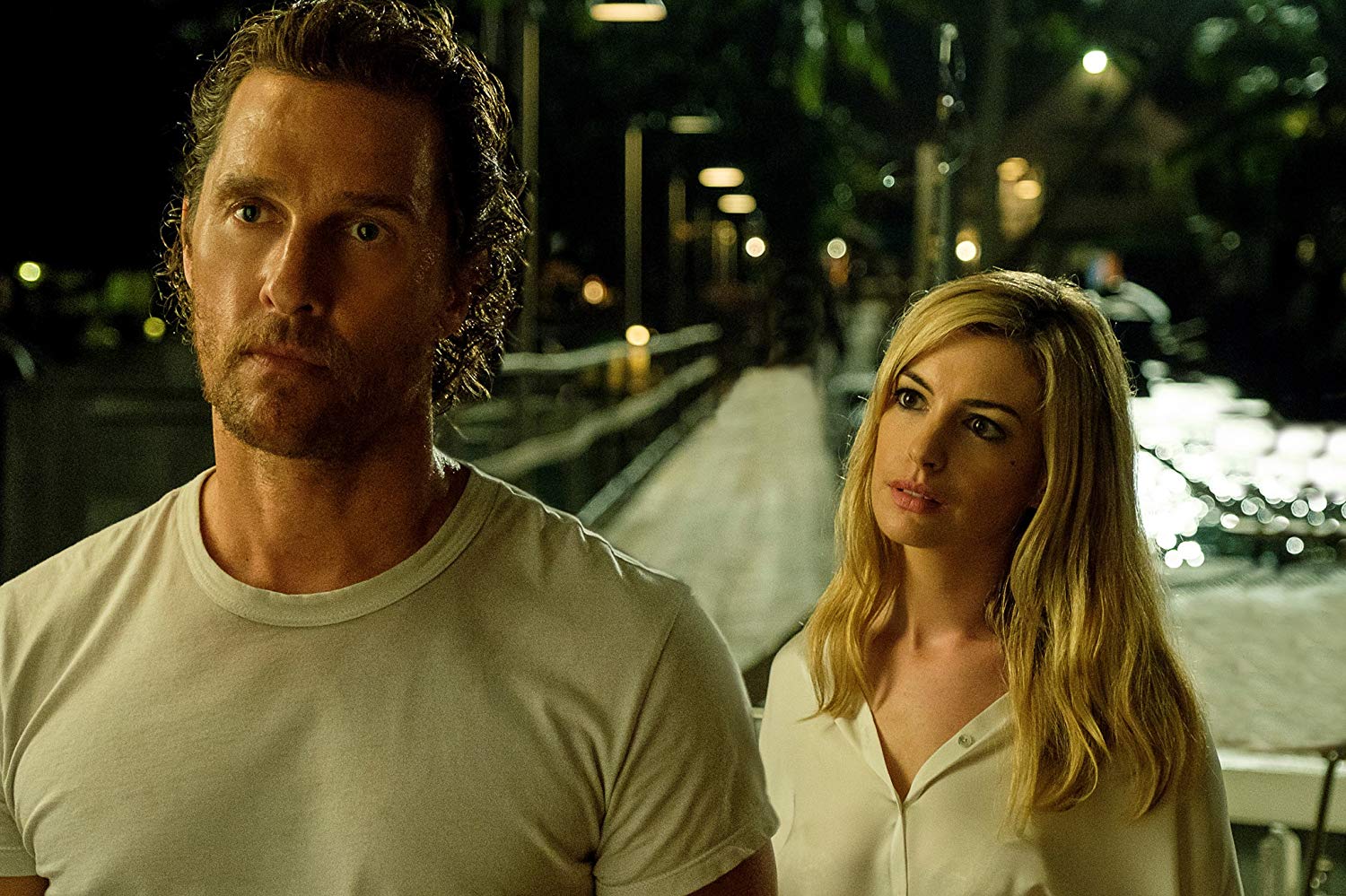 Matt Taylor
Third year English student and Film Editor with the capacity to geek
Published at 07:00 on 21 April 2019
Images by IM Global

Contained somewhere within Steven Knight’s Serenity is a really good movie. Sadly, you wouldn’t think so. Described by Sky Cinema as a ‘sensual thriller’, it feels more like three different movies have been spliced together to form a jarring, wildly inconsistent film that simply wants to do too much – and doesn’t end up achieving anything particularly good.

According to the film’s most basic synopsis, Serenity focuses on Matthew McConaughey’s character, a fishing boat captain who receives an unexpected visit from his ex-wife, who asks him to kill her new husband for her. Intriguing though it may seem, the premise quickly falls apart once some logic is applied to it – a comment that could be made about the film as a whole.

Perhaps the most important thing to be said about Serenity is that it’s been marketed in completely the wrong way. From its synopsis, trailers, and posters, we’re led to believe that we’re getting a morality thriller, with a simple plot and interesting characters. That is not what Serenity is – far from it. The plot ends up being complex to the point of ludicrous, and the characters are anything but interesting.

The film’s meandering plot does nothing to help the proceedings. Its characterised by its lack of vision – of what it wants to be. The first third seems to be the setup for a potentially interesting character study about a man dealing with grief; the middle almost manages to be a sunny and sexy revenge thriller; and the final third is accompanied by a reveal that has to be among the stupidest, most unbelievable, most nonsensical twists in any movie this century. It feels as though it belongs in a completely different film, and removes any connection we may have had with the story – if that connection was even there in the first place. The internal logic here is totally askew, as well – events in one place seem to dictate events in another place, but it’s never made clear why this is the case. We’re just expected to go along with the madness; as a result, a scene that takes itself extremely seriously and is clearly intended to carry a great deal of emotional weight simply fails to land. There is never any emotion or connection to any of the film’s events, characters or plot points – and while a good deal of that is down to Serenity’s uncertainty over its identity, a fair chunk is also down to the script.

McConaughey’s Baker Dill (perhaps the most ridiculous character name of 2019 so far) is haunted by ambiguous demons, on a quest to catch a very specific tuna fish for reasons unknown. He’s the only one given any kind of development, too; his seemingly tragic backstory is meant to intrigue us, but, if anything, Knight is too ambiguous with what haunts Dill, leaving us at a complete loss as to what is actually going on. By the time the film ends, all our guessing has been fruitless, as the revelation is not something we could ever have guessed, and sends the film into absurdity.

Anne Hathaway plays Dill’s ex-wife Karen, and is surprisingly bland. Her sole character trait is ‘I’m a woman being abused, and I need a man to help me’ – hardly a progressive attitude, to say the least. Karen genuinely has no other characteristics; she is the least interesting of all the main characters, and Hathaway gets nothing at all to do in the role. Her current husband is played by Jason Clarke, a man who doesn’t get nearly enough big roles to suit his acting talent. Here, however, he’s reduced to very little. He abuses his wife simply because the script says he should – there’s nothing of substance here. There’s also a daddy kink, which just seems unnecessary. Oh, and Diane Lane and Djimon Honsou pop up in several scenes, but do and say very little of note – what a waste.

While the acting is mostly one-note (each does what they can with what they’re given), the script is extremely restricting. Reid Miller’s character exists purely as an exposition machine, who always somehow misses Dill when attempting to see him, then delivers clunky explanations for some of the weird goings on. Much of the rest of the dialogue is either extremely clumsy or massively unclear – Knight’s script never quite finds the balance between the two that he needs to create a compelling film. Many of the lines he wrote for McConaughey seem to involve him aggressively screaming at the sky, and Hathaway seemingly switches between victim and sexual provocateur at the drop of a hat. The film’s editing is no good either: one extremely important scene is cut away from in an attempt to jar the audience, but it’s done wrongly (a few more seconds would have made it work); Dill’s flashbacks/nightmares are edited too quickly for us to be able to follow properly; and there are some extremely odd camera movements that seem to be trying to do something, but ultimately serve no purpose at all, and just end up making us feel uncomfortable.

That’s an idea that could be applied to Serenity as a whole; it feels like it’s aiming for something grand, but misses the mark completely. Despite an intriguing beginning, Knight’s poor script leads to the film feeling like it wants to do too much, and then all its components feeling half-baked. You’ll genuinely have more fun with Sky Cinema’s Stars of Serenity collection than you will with this mess.

A good cast sadly can’t do anything to save this sinking ship. Jarring editing, nondescript direction and a woefully inconsistent script result in a total wreck of a film that never decides what it wants to be. A poor catch.