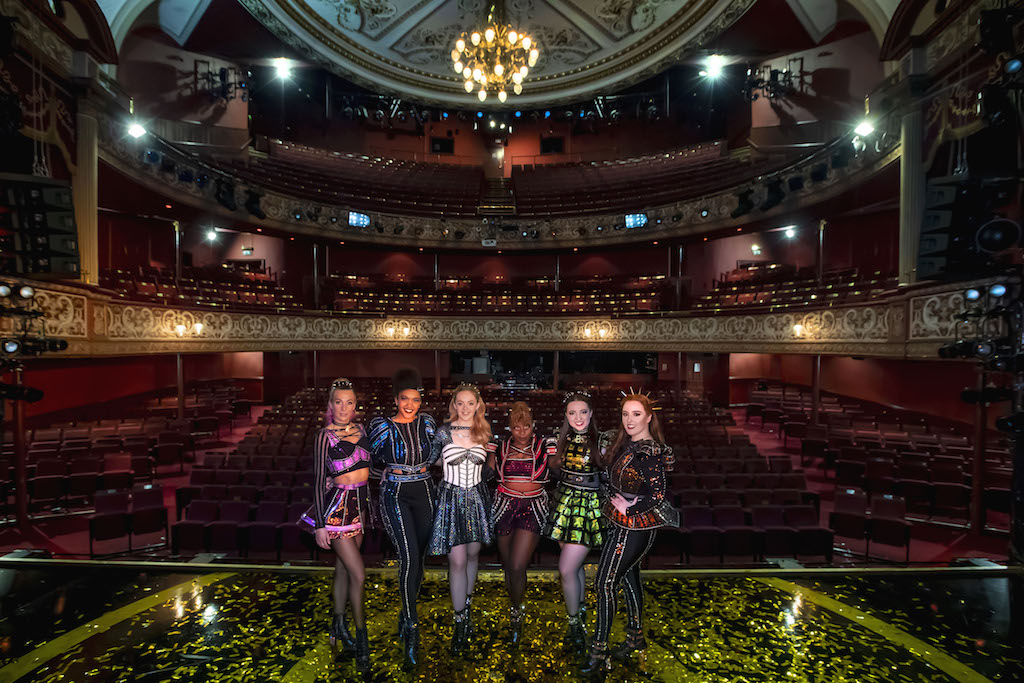 Review: SIX at the Wolverhampton Grand

Written by Ben Johns
Published at 14:30 on 24 March 2020
Images by Wolverhampton Grand

‘Divorced, beheaded, died, divorced, beheaded, survived’ goes the saying, but the stories behind Henry VIII’s queens are rarely developed further. SIX builds on the important work done to reclaim and retell the stories of women throughout history, with the high-energy show offering Catherine of Aragon, Anne Boleyn, Jane Seymour, Anne of Cleves, Katherine Howard, and Catherine Parr the opportunity to tell their own her-stories.

Instead of being a conventional musical, SIX is a one-half pop concert. Toby Marlow and Lucy Moss’ book mixes together the queens of the 16th Century with the soundings of Adele, Ariana Grande, Avril Lavigne and so many more. After the feisty opening number ‘Ex-Wives’, the queens decide to compete in a musical battle to determine who was done the dirtiest by Henry VIII with the winner being crowned the lead singer of this Tudor girl group.

Each of the past queens has their own contemporary ‘queenspiration’, and so each of the six actresses has a clear kind of performer to channel. Sticking with the chronological order of Henry VIII’s marriages, Catherine of Aragon, portrayed wonderfully by Harriet Watson, was the first woman wronged to take to the floor. Her performance of ‘No Way’ got the ball rolling on a show bursting to the seams with girl-power; and with the others queens acting as backing dancers and a four-piece female band, The Ladies in Waiting, providing the musical accompaniment, SIX feels like a true feminist statement. Following on was Maddison Bulleyment as Anne Boleyn, with the bratty ‘Don’t Lose Your Head’ reaffirming the petulant reputation of arguably Henry’s most famous wife.

A torch song plonked in the middle of the show could have derailed all the hilarity. However, thanks to Lauren Byrne as ‘the one he truly loved’ Jane Seymour, ‘Heart of Stone’ is elevated from being a by-numbers musical theatre ballad. Although all the actresses flex their singing talents, Byrne has the vocal performance of the night and provides one of the most moving parts of the musical without becoming saccharine.

The thrashing europop of ‘Haus of Holbein’ and its accompanying neon light show plunges the audience back into the light-heartedness. Shekina McFarlane as Anne of Cleves provided most of the laughs with ‘Get Down’. The story of the original catfish is transformed into a swaggy bop about being an independent boss. Katherine Howard’s story also gets a facelift. Jodie Steele had a hard task to undertake, but on the flirty ‘All You Wanna Do’, she expertly balanced the caricature of Howards’ ‘promiscuous’ public persona with her actual vulnerability as a victim at hands of men in power.

Last up was Athena Collins as Catherine Parr, the only wife to live to tell her tale. The defiant ‘I Don’t Need Your Love’ gave a metaphorical finger to Henry VIII, instead reeling off Parr’s history as an education innovator and a writer, and how it was time for all of the wives to take back control and rebuke their history as being reduced to just one of six. It all led perfectly into the final song ‘Six’, and with its rallying cry about the power of unity, it was the perfect ending to this empowering show.

SIX is a prime example of a creative team taking a risk and being rightfully rewarded. It’s journey from a student production at the Edinburgh Fringe to a musical theatre sensation playing at theatres across the UK, Australia, and Broadway proves the importance of supporting young and vibrant theatrical idea.

Long shall its joyous reign continue! And for any nay-sayers, it should be off with their heads.