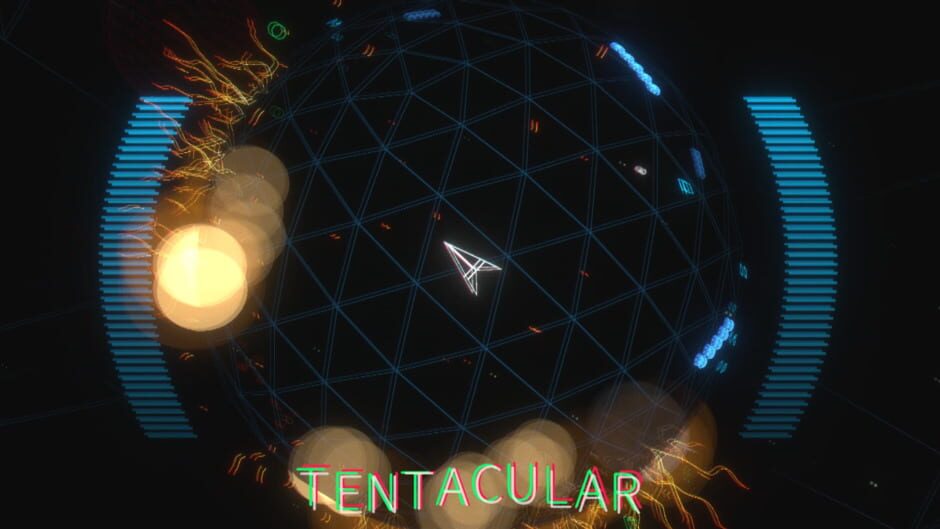 Dashiell Wood dives into recent release Terror Squid – an arcade game on most current consoles – to see if it’s worth the small fee.

Written by Dashiell Wood
A BA English student with far too much to say about videogames both old and new who constantly witters about them on the internet. You can find me here on Redbrick, managing my own publication Arcadeberry.com or contributing my review scores to OpenCritic. You can also find me on Twitter @DashiellWood.
Published at 16:30 on 12 November 2020
Images by Apt Games

If you’re looking for some innovative indie action to keep you busy over the upcoming holiday season you might be tempted to dive into the geometric world of Terror Squid, an aptly named arcade game from Norwegian developer Apt Games, which shows you just how scary life as a solitary cephalopod can be.

Sporting slick vector graphics and accompanied by a stellar synth-pop soundtrack, Terror Squid traps players in an intensely eighties-inspired bullet-hell of their own making. Playing as the titular terrible squid, players must try to survive while navigating an empty polyhedral planet. Unlike in a traditional bullet hell game, in Terror Squid there are no enemies except yourself with your squid perpetually producing a glowing line of rapidly moving projectiles from its rear end, which I have optimistically assumed represent ink rather than anything else.

Touching one of these problematic projectiles presents the prospect of an immediate game-over. Constantly moving in a straight line from the point they are placed, these projectiles quickly begin to accumulate after rapidly looping around the small spherical map. Gameplay involves the player weaving in and out of their own trail without touching it for as long as possible. With each projectile dispensed, the player’s score increases and a gauge at either side of the screen fills.

Once full, this gauge allows players to “detonate” at the tap of a button and clear a small area around them of projectiles. These in turn explode, leading to incredibly satisfying chain reactions. Players are rewarded for waiting for as long as possible to clear the screen by greater combos, creating a nail-biting risk vs reward mechanic. Each time the screen is cleared, your trail changes colour with each new colour having a distinct pattern and behaviour, with some moving rapidly in erratic wave-like fashion whilst others are slower and gradually fan out in a more circular arrangement.

In extended play sessions you may start seeing the same patterns over and over again, but it’s nice to have a little variety to keep things interesting. As well as detonation, there is also a dash button at your disposal allowing the player to leap forward quickly and clip through any oncoming obstacles. Dodging is definitely a useful tool when you find yourself in a tight spot, but the cooldown period of a few seconds means that it is best used sparingly.

Whilst I was surprised to see that the game does not feature a tutorial, Terror Squid’s two-button and joystick control scheme was refreshingly easy to get the hang of quickly. The simple controls, alongside the title’s short length, emphasis on replayability and addictive nature, make it an ideal option of you’re looking for a game to pick up and play in brief bursts on the go.

Sadly, in terms of progression there’s disappointingly little to actually work towards in the game. Beyond just playing to see all the projectile patterns on offer, there’s a small handful of “sigils”, or achievements, to gain which can be unlocked by surviving for a certain duration of time. Getting these achievements doesn’t do anything however and something like additional unlockable projectile patterns or alternate colour schemes to reward your progress would have gone a long way to incentivise longer-term play. On the other hand, there is also a high-score leader board with daily, weekly, and all-time categories which players, with far more patience than I, might be inclined to chase.

Despite being undeniably enjoyable, it is admittedly a bit of a shame that there isn’t just a little more content in Terror Squid. Although the game is cheap to pick up, coming in at under £10, only offering a single game mode and a couple achievements makes this asking price a little harder to swallow than it would be if it was below the £5 mark. Still, the unique premise and distinctive visuals make Terror Squid a game fans of the bullet-hell genre should definitely take a look at and bookmarking as a title which would certainly be worth picking up on sale.

On a final note, although the game is available on both Steam and the Nintendo eShop, I would recommend the more portable Nintendo Switch iteration as the superior version with its more traditional arcade-feeling joystick and button controls much more suited to this kind of fast-paced gameplay than a mouse and keyboard.

Thank you for reading this review! Take a look at what else Redbrick Gaming offers below: