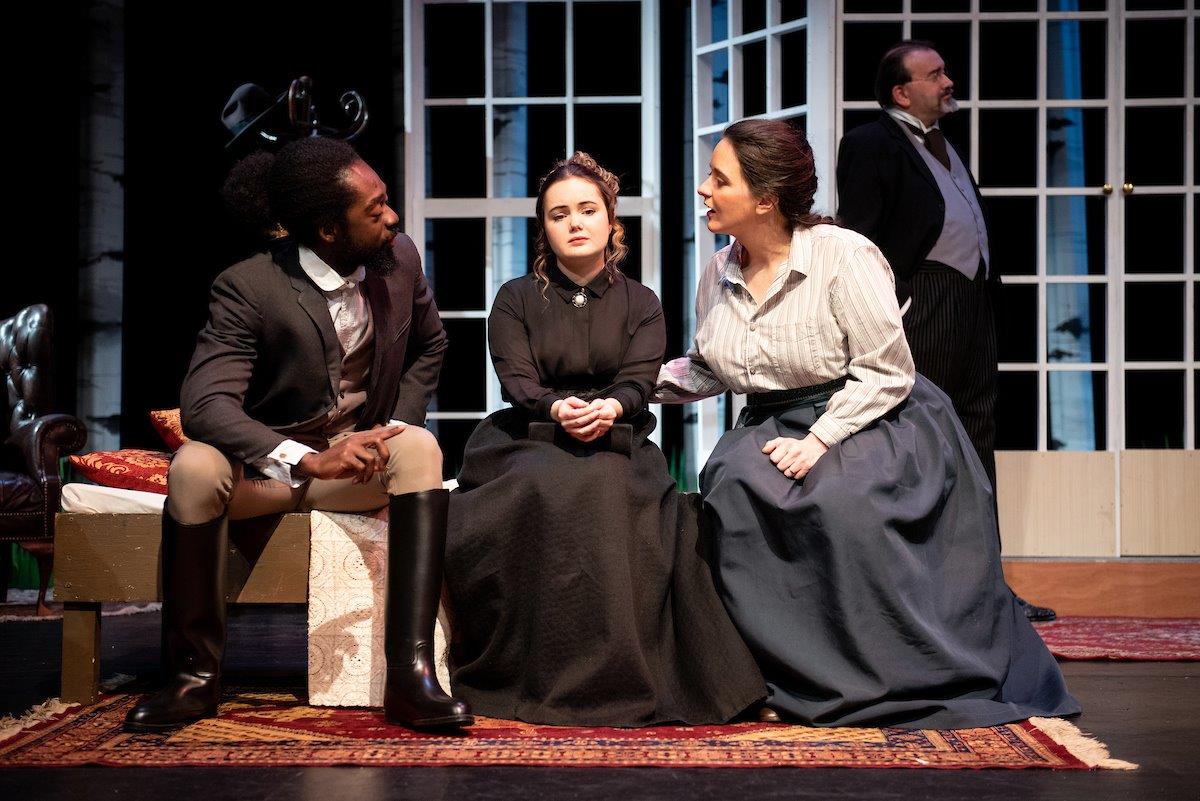 Review: The Seagull at the Crescent Theatre

Frankie Rhodes
I am an English student and aspiring journalist from Essex, with a love for all things arty and musical.
Published at 07:00 on 14 February 2019
Images by Courtesy of the Crescent Theatre

This week consisted of my first exposure to Russian literature, in the form of The Seagull, a naturalistic play written by Anton Chekhov, adapted by Christopher Hampton, and performed by the Crescent Theatre Company. Set in 1895, this play centres around a group of socialites, workers and aspiring creatives residing in a Russian country estate. The action is focused primarily on a play-within-the-play, written by the intense, melancholy Konstantin and starring his fresh-faced muse, Nina. Among the spectators is Irina, Konstantin’s conceited, domineering Mother, and Boris, the hugely famous yet timid writer. Following the aftermath of this performance, the social network of family rivals and mismatched lovers becomes a hotbed for loss, deceit and betrayal.

The most striking element of the play, apparent from its very beginning, was its bleakness. The curtains opened to a misty lake-side scene, with bare tree trunks stretching up to the ceiling and a dull pink light resembling twilight. When the characters began to speak, it was with such an emptiness, with each confrontation seeming to drag on listlessly. It was only several scenes into the play that I realized that this effect was deliberate, and indeed, was highly compelling.

The sheer boredom and frustration of the characters was an essential part of understanding the play’s action. However, amongst this heavy backdrop, one or two actors managed to add a refreshing lightness to the performance. This included Irina, portrayed by Karen Leadbetter, who embodied perfectly the charismatic, fading golden girl, her sense of self-importance distracting her from the love of her son. She was perfectly poised with a lace parasol, stretching out on embroidered cushions, and able to be simultaneously enchanting and wicked. Another character to breathe life into the production was Nina: from the moment that Hannah Birkin floated onto the stage in a crisp white dress, she brought purity and integrity. As the metaphorical Seagull, she was beautiful when she flew, and heart-breaking when she fell.

This adaptation kept the original four-act structure, including an interval between acts two and three, with a brief close of the curtains to mark the other breaks. This effectively contained the action within four comprehensive parts, and the use of curious background noise such as birds tweeting established suspense between the acts. Towards the end of act two, the audience were properly introduced to the character Boris, who was coaxed out of his artistic shell by Nina to reveal a kind, simple-minded interior. The scenes that the two actors shared were effortlessly convincing, with John O’Neill able to deliver lengthy speeches as Boris in what felt like seconds, captivating the audience with his amiable manner.

Aside from such brief moments of brightness, the drama was dominated by sadness, which the characters were able to effectively portray in different ways. The most intense depiction must be attributed to Jacob Williams as Konstantin, who brought such sorrow to the role that his performance was highly affecting, although perhaps at times a little monotonous. Pyotr represented the musings of an old man mourning wasted opportunities, whilst the pessimistic, widow-esque Masha despaired over life in a way that was almost comical. Having said that, a disappointing element of the play in general was its inability to quite grasp the comedic aspect that it was aiming for. Intended jokes were often met with awkward silences as the bleak spirit of the play seemed to permeate every aspect. Whilst certainly poignant and effective, the play was far from funny- and the director’s attempts to create this sadly proved to be mostly futile.

Yet, the evocative atmosphere created was enough to distract from any ill-fitting comedy. Elaborate furniture adorned the stage, including an intricate white conservatory creating the effect of a bird cage. These doors opened to the outside at which point the sound of rain began to fill the theatre, so that each time a chill passed through the audience as if they were really entering into a stormy night.

Certainly, this was a play in which atmosphere preceded everything else. The skill of the actors combined with the picturesque scenery created a thought-provoking performance that served as a worthy interpretation of Chekhov’s classic play.

For more information on The Seagull, and to view further production photography, click here.