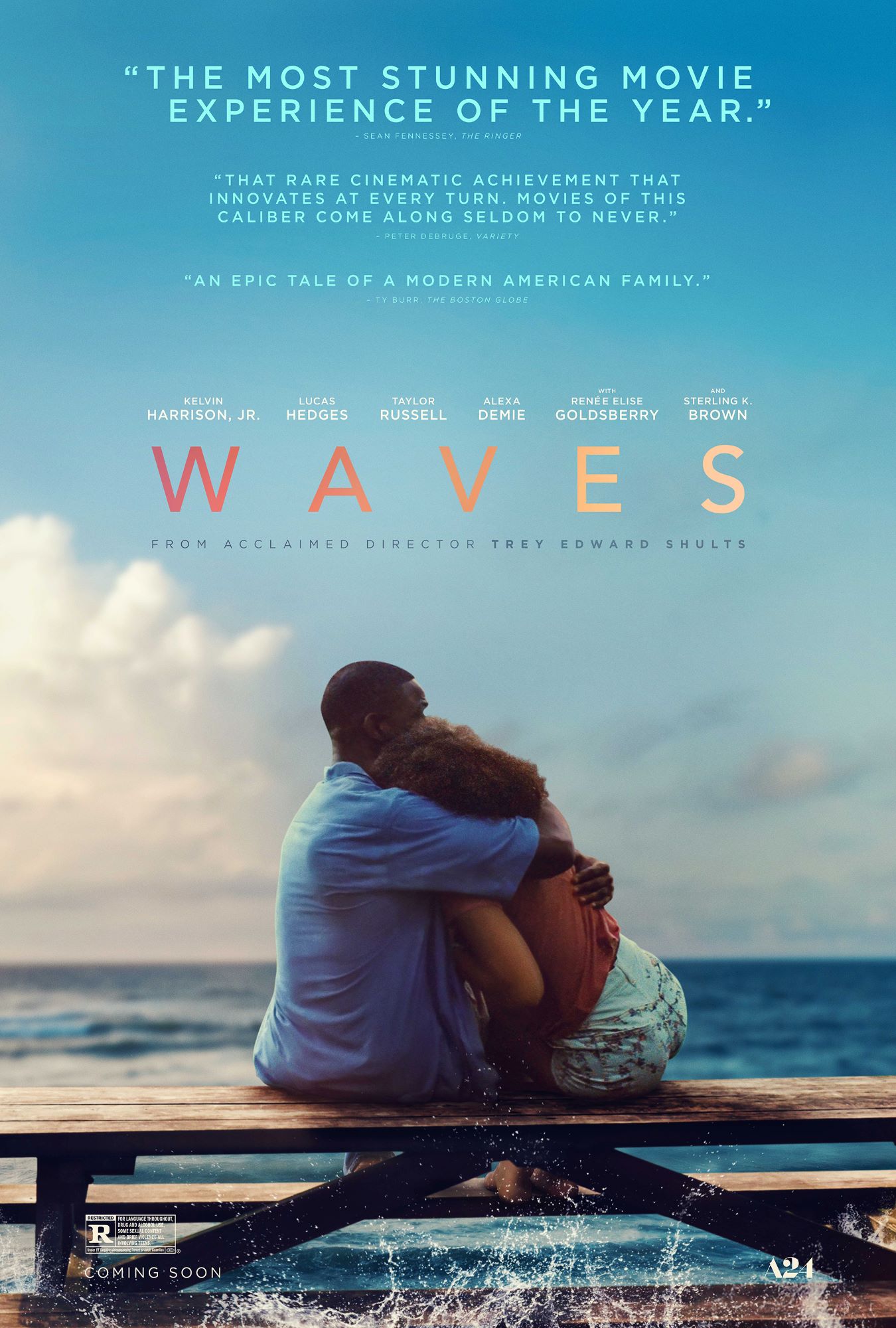 Matt Taylor
Third year English student and Film Editor with the capacity to geek
Published at 13:00 on 24 January 2020
Images by A24

Where to even begin with a film like this? Such is the impact of the latest from director Trey Edward Shults that I can barely find the strength to type these words. It’s a film that is at once barely describable yet utterly, utterly perfect. Shults takes everything he has examined about family in his previous two efforts (the seldom-seen Krisha and the much-misunderstood It Comes at Night, the latter of which is among my personal favourite genre movies of the past few years) and builds on it, leaving his audience reeling with Waves, a beautiful, ethereal triumph of filmmaking that will catch you completely unaware and sweep you off your feet.

Everything about Waves feels … transcendent. That is not a word I use lightly; I can count on one hand the number of films released this century that have made me feel this way (those being Moonlight, Marriage Story, and If Beale Street Could Talk). But Shults’ film genuinely does transcend almost everything we think we know about love, loss, and family, resulting in a film that feels true, raw, honest, and ever-so-real. It tells the story of a family falling apart and slowly learning how to come back together, and is at once a romance, a family drama, and two separate coming-of-age stories; what Shults has achieved here is nothing less than magnificent. But having said that, it is of course not all down to the director; Waves is solidified by every single one of its components, from its pitch-perfect lead performances from everyone involved all the way down via its breathtaking score and cinematography to its beautifully minimalist editing – every single part of the film comes together gorgeously to create a piece of pure cinema that will strike you at your very core and leave you shedding more tears than you ever thought you could.

Shall we start with the performances? A film such as this lives or dies by its cast, but thankfully all involved put in some of the best work of their respective careers. At the helm is Kelvin Harrison Jr, star of It Comes at Night who began to truly break into his own with his stellar turn in last year’s Luce. Here he puts in a truly wonderful shift as Tyler, star athlete whose relationships both romantic and familial leave him with everything he could ever want. But when the threats of injury and his girlfriend’s late period throw his plans into chaos, he begins to crumble under the pressure of it all. Harrison is wonderful in the role, shouldering the heavy narrative with ease in a turn that really makes us believe in Tyler as a human being, rather than simply a character on a screen. The same could be said about all the other performances; taking an equal lead is Taylor Russell as Tyler’s younger sister Emily, who really comes into her own during the film’s second half. We see only flashes of her towards the film’s beginning, but when she takes over the narrative she becomes the film’s beating heart. When she struggles to deal with the pressure of the loss that Shults places on her, we believe her: every tear, every look, every forced smile feels so undeniably real, and her conversation with her father towards the end of the film is truly the standout moment. When she blames herself for the tragedy that occurs, we understand and empathise with her more than we have any right to, and the resultant scene is sure to bring you to tears.

Having said all that, the real MVP of Waves is the magnificent Sterling K. Brown. This is a man who’s been quietly killing it for years, and here cements himself as one of the greatest actors of his generation. He imbues Ronald, father to Tyler and Emily, with every ounce of humanity he possibly can to the extent that Brown has the power to bring you to tears with a single look (as happened on several occasions, I’m not ashamed to admit). He trains with his son to keep him in shape for his school wrestling season, and pushes him as hard as he can to allow him to succeed. When his relationships with his family begin to fall away from him, partially as a result of this, we feel his loss on an undeniably human level, and when he tries to reconcile those bonds we truly want him to succeed. His work here is never anything less than pure humanity, and it’s frankly criminal that he’s been overlooked at every major awards ceremony this year.

The rest of the supporting cast is wonderful, too. Renée Elise Goldsberry is on beautiful form as Catherine, Ronald’s wife and stepmother to Tyler and Emily; as the others do, she struggles to come to terms with the family’s loss, and begins to blame Ronald for the fallout of it. Goldsberry shines in whatever mood her scenes take, be they tender or argumentative, and we feel her loss as much as we feel it in the rest of her family. Alexa Demie plays Tyler’s girlfriend Alexis with even more humanity than we thought we could bear; she and Harrison have perfect chemistry that results in us instantly believing in and rooting for them, so when conflict arises between the two we genuinely fear for the outcome. Lucas Hedges continues his run of stellar supporting roles that he hasn’t broken for years now with his appearance as Luke, Emily’s love interest. He’s both gangly and awkward, yet ever-so-sweet in the role, finally giving Emily someone to love and trust when she feels as though her world has fallen apart. As an ensemble cast, it rarely gets better than this.

Despite those perfect performances, it is not just on the surface that Waves is transcendent; the film excels on a technical level too. Its score is utterly beautiful, thanks to a mix of original music from Trent Reznor and Atticus Ross and a soundtrack of contemporary rap, R&B and alternative songs from artists such as Frank Ocean, Tame Impala, Kendrick Lamar and Amy Winehouse. Whichever style of song Shults chooses to use always fits the scene perfectly, elevating it into something magnificent. Reznor and Ross’ use of synth music for parts of their score feels perfectly in-tune with the film’s South Florida setting, resulting in the place itself feeling as alive as the characters before us.

But what really sets Waves apart on a technical level is Shults’ remarkable use of cinematography as a way of expressing emotion. DP Drew Daniels’ camera alternates between fluid and static depending on the context of the scene: a gorgeous long-take of a camera spinning round a car at the beginning is repeated towards the end in a gorgeous moment that deliberately calls to mind its similarities, while also letting us know that things will be different this time. What really sticks in the mind, however, is Shults’ changing of aspect ratios to convey emotion. The film opens in 1.85:1 (the same aspect ratio as most standard television programmes), letting us truly take in the emotion and spectacle on display. As Tyler’s world starts to crumble, we move to 2.35:1 (the go-to ratio for most modern movies), a narrower format that clues us into the fact that something may be about to go very, very wrong. That feeling is solidified when the film condenses into 1.33:1 (also known as 4:3, the same square frame as older silent films), leaving us with an intense feeling of claustrophobia that mirrors the trajectory of the narrative. When tragedy strikes we stay in 1.33:1 for a while, but as the Williams family slowly tries to rebuild, we expand again, first back to 2.35:1, then finally to 1.85:1 for the film’s ending as we begin to find both freedom and peace. What Shults and Daniels boldly do is to use the very form of film itself to convey thoughts, feelings, and moods – and against all odds, it is a resounding success.

There is truly not a single flaw in Waves: it feels as though we rarely see films of this calibre. This is an experience unlike so many others, creeping up on you without you noticing, then making you feel more emotions than you ever remembered you had the capacity to feel, breaking your heart into a thousand pieces before slowly finding a way to piece it back together. It is a wonder in every aspect of its being, and we should be truly grateful that films like this exist to remind us just why we love cinema as much as we do.

Everything about Trey Edward Shults’ latest picture is nothing less than perfect, coming together as one of the most beautiful collages of film we are likely to see for a good few years. Thanks to its wondrous performances and gorgeously inventive direction, Waves is nothing less than heart-breaking, earth-shattering, life-affirming cinema. A moving, transcendental masterpiece of modern filmmaking.

Waves is in select cinemas now.

Images courtesy of A24. All rights reserved.