Soundtrack Of My Life: Georgie Deaville 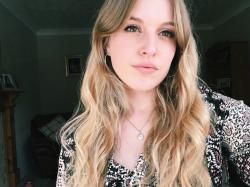 Everyone’s music taste comes on in leaps and bounds as you jump on the rollercoaster of life. It’s often the people you meet, the places you go, the trials and tribulations you have that make their mark on your playlists, leading us to associate certain songs with certain events. Having spent 21 years on the planet, it’s a near impossible task to summarise my life in just 5 songs. My music taste has blossomed over the years, and I’m looking forward to see what songs will attach themselves to whatever life has in store for me. But for now, I’ll attempt to select a number of significant tracks that have helped shape the person I am today.

The first song I remember hearing: Murder on the Dancefloor – Sophie Ellis-Bextor

I can’t really remember anything before the age of 7. What I can remember is that from that age, I’d been making playlists. My 7th birthday party was going to be the biggest party I’d ever had; all my cousins and best friends from school would be there, so it was crucial for me (with the help from my dad) to make a popping playlist. Around that time, I worshipped Five, adored Sugababes and wanted to be Kylie Minogue (I’ve never really stopped wanting to be Kylie). However, the one song that takes me back to the best party of Year 2 has got to be ‘Murder on the Dancefloor’ by Sophie Ellis-Bextor. Every time I hear it I picture the huge bouncy castle that filled my back garden, the gazebo the sheltered the buffet on the patio and the silver CD player that blasted out my playlist that back in those days had to be burned to a disc. As a track that is the perfect epitome of the era of pop music I grew up with, it’s earned its well-deserved place on my list.

This was a tough one; it was between this and ‘Two Steps Twice’. It was Leeds Festival 2016. I’d seen Foals when they’d toured earlier that year, and after hearing rumours that they’d introduced ‘Cassius’ in their live sets, I was buzzed to see them for a second time. It was the Saturday night of the festival and having raised the hopes of the strangers around me in the mud bath that surrounded the main stage, I was going to be a bit embarrassed if the rumours I’d heard were false. Alas, Yannis and co. didn’t let me down. The crowd, including myself, went crazy. We were possessed by the infectiously catchy hit from their debut album, not a care in the world that our clothes and boots may never be clean again. I still get goose-bumps every time this track comes on shuffle, and each time I’m taken straight back to that squelchy field, watching one of my all-time favourite bands, that I would do anything to go back to.

A song for pre-drinks: Oi – Scooter

(Heads up: I think I’m being ironic with this one… but I can’t be sure). A couple of drinks down (or more likely a sip) and I’ll be preaching how this is the best song in the world. Which it is. Kind of. Everyone’s got that silly song they that truly make a solid pre-drinking session, and for me and my housemates, it’s this. People may remember Scooter’s most famous ‘The Logical Song’, but for some reason, everyone stopped there. They didn’t bother exploring the rest of the groups euro-dance repertoire, a collection that’s perfect for when you’re reaching peak drunkenness and about to hit the town. ‘Oi’ takes the edge as my favourite, not only for its funky bassline, but also it’s simply lyrics: ‘Did it for the fame but always did it for the joy, Cus everywhere I go they scream oi fuckin’ oi’. If Scooter’s taught me anything, it’s this: ‘Don’t take life too seriously, nobody gets out alive anyway’.

A song for driving: Let It Happen – Tame Impala

When I’m away from uni, I treat myself to car insurance on my Nan’s little red Peugeot 107 in order to escape the bore filled bubble that is Burton on Trent. There’s not much to do in my town apart from go to the pub (it is one of the brewing capitals of the country, check your Carling can). When it’s my time to be designated driver, it involves me trekking across town to pick up my friends who annoyingly live as far away from our local as possible. To make it a less tedious task, I have to make all the fun I can. When ‘Let It Happen’ came on shuffle on the ‘Driving in my Nan’s Car’ playlist, I wondered if I could get all the way across town in the 7:48 song duration. Probably not the most sensible thing to do, so don’t try this at home, and always stick to the speed limit… but it turns out it can be done.

Song that reminds me of school: Something Good Can Work – Two Door Cinema Club

This immediately takes me back to school. It reminds me of all my friends from school who I am still close to now, the synthetic bottle green uniform we all hated wearing and listening to music on the big trampoline in the sunny afternoons. ‘Something Good Can Work’ makes me particularly nostalgic; it’s such a feel-good bop that sends me back to a much simpler time when I was pretty care-free with the only worries I had being my GCSEs. I remember us all attempting to sing along to it on our walks home from school and failing because we had no idea what the lyrics of the chorus actually were (I’m not sure I’m 100% even now). Seeing TDCC at V Fest 2013 was a huge moment for teenage me, and an even bigger moment for 20-year-old me when I saw them at Leeds last year. They’re one of those bands that seem relevant every summer, always making it onto my ‘Summer Playlist of Two Thousand and…’ whatever. Although I know I’ll never be a kid again, this song detains me from fully making the unwanted conversion into adulthood and all its seriousness, and I’m very grateful.