Soundtrack Of My Life: Sophie Rashley 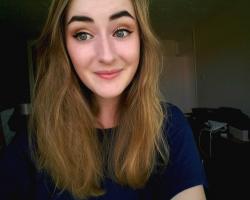 The First Album I Bought: Fall Out Boy – Infinity on High

I remember my sister pulling this up on YouTube and making me sit down to listen to it with her – the beginning of my renowned emo phase. Although my never-ending love for Fall Out Boy led to some bad eyeliner choices, it sparked my passion for all kinds of music. Infinity on High was the first album I ever bought and I would blast it in my room, thinking I was the coolest 10-year-old there ever was; it created a sense of community for me that I wouldn’t have had access to otherwise. Listening to Fall Out Boy then led me to Panic! At the Disco, Twenty One Pilots, My Chemical Romance and so on, and that kind of music really fuelled me growing up. I’m not even ashamed of the Tumblr blog I had dedicated to them.

My Favourite Concert: Walk the Moon

I went to see Walk the Moon live for the first time in 2013. The gig was in this tiny boat in Bristol called Thekla and I was front row without a barrier – it’s safe to say it was amazing. They played ‘Tête-à-Tête’ live for us before it had been released on their EP. The feeling of hearing it live first was just incredible to my fifteen-year-old self. They gave us neon face paint and the lead singer gave me his set list at the end (it was on a paper plate and it was beautiful). It’s an amazing, fun, dancey song with a fantastic bass line. I’ve loved seeing Walk the Moon grow in popularity over the years. They never fail to impress when I see them live.

The Song That Got Me into Other Genres: Young the Giant – Cough Syrup

I first heard this song on Glee (I know, I’m sorry) and it really hit me. The lyrics are stunning and Sameer’s voice is undeniably one of the most beautiful voices I’ve ever listened to. His tone is soft and he always seems genuine in every song he sings. Young the Giant’s self-titled album is ultimately one of my favourites, helping to lead me away from my so-called “emo phase”, and introduced me to a variety of genres instead. It was also one of the first songs I learnt on guitar so ‘Cough Syrup’ holds a special place in my heart.

The Band I’ve Seen The Most Live: Prides – Little Danger

I first saw Prides when they supported Twenty One Pilots on their tour in 2014, just before they released their first EP, and I think I’ve seen them about five times since – definitely more times than any other band. They’re incredible live, always passionate and always fun, and I’ve loved seeing them become more recognised over the years. I own a load of their merchandise and I wear it with pride (see what I did there). They’re kind of an electropop indie rock mix and their album The Way Back Up is full of some top dance tracks and some more moody songs. ‘Little Danger’ is possibly even better live than it is on record as the crowd sings the ‘I wanna be’ parts. I’m sure Prides will become really well-known one day.

The Song That Makes Me Think of Summer: By The Rivers – Vulture

This song makes me think of summer and my friends from home. I first heard it played at my local festival in North Nibley, whilst being supplied with a hefty amount of Pimms. From then on it’s been commonplace in all our best summer playlists. It’s a song with great harmonies and rhythm. If I hadn’t heard it played at Nibley I probably would never have thought to listen to it, so I’m glad it was because everything by this band makes me smile and think of home.