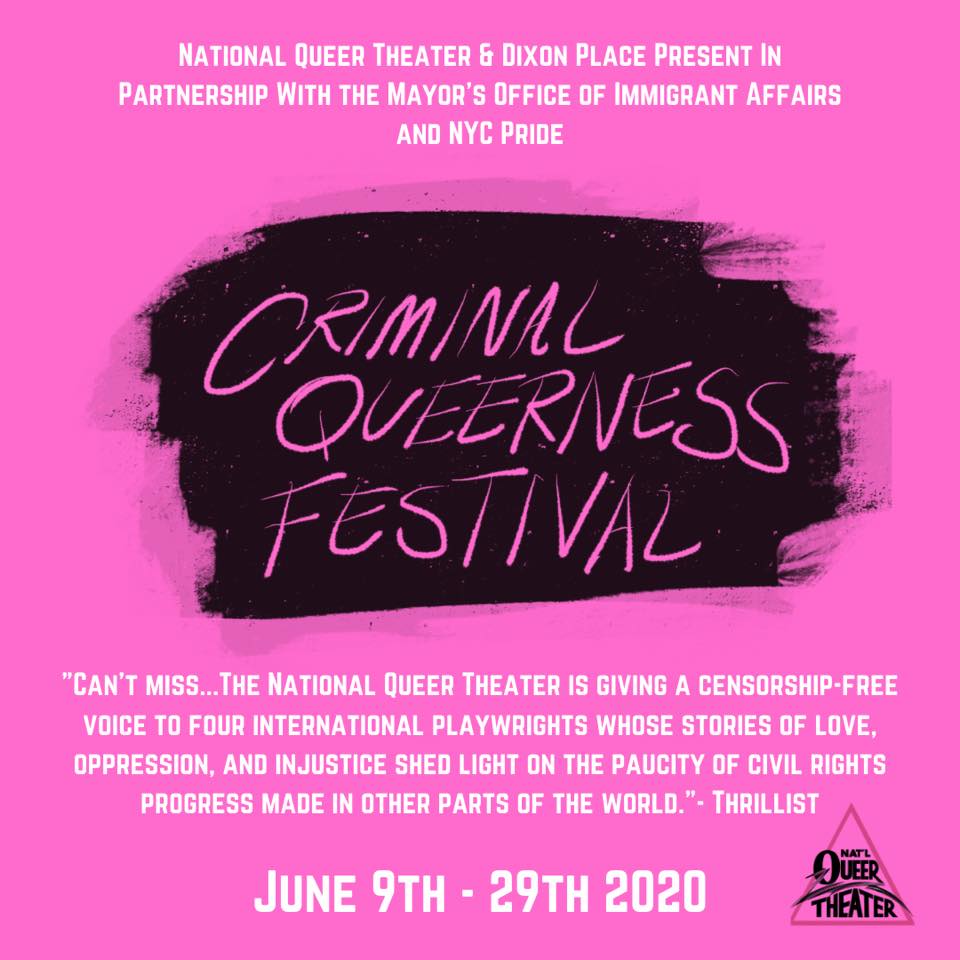 On what would be its third year, the Criminal Queerness festival has had to adapt to a virtual format due to pandemic restrictions. Running from the 13th until the 28th of June. Adam Odsess-Rubin, the creator of Criminal Queerness, works with the National Queer Theatre to produce this festival each year. Odsess-Rubin’s main objective was to elevate the LGBTQ+ community within the world of theatre.

In ordinary times, the festival features international plays, talks and workshops, run by the LGBTQ+ community. However, this year Criminal Queerness will take place online. Odsess-Rubin does not see why this year should be anything but a success. In fact, he believes the restraints brought by the coronavirus are on opportunity; in digital form, the festival can reach a wider, international audience.

As a rule, these plays do not shy away from controversy. Indeed, many of the playwrights confront the difficulties faced by the LGBTQ+ community in countries where it is a risk to come out and illegal to identify as queer. The festival began with humble aspirations; as Odsess-Rubin describes, it was a ‘Queer Village Reading Series.’ Despite this, Odsess-Rubin still saw a need for LGBTQ+ representation on an international level. It was through this aim that Egyptian playwright Adam A. Elsayigh put forward Drowning in Cairo. The play showed gay Egyptian men at a boat party first arrested, tortured, and then imprisoned because of their sexuality.

Elsayigh’s play went on to make international headlines. Odsess-Rubin voiced how he was ‘really blown away by the play that created a three-dimensional story that highlighted the complexity and diversity of queer life around the world.’ In Egypt, the play has not been produced. Even readings of Drowning in Cairo would run the risk of arrest by the country’s secret police.

This drew public attention to the censorship of gay writers and further questions over the amount of work that has been lost over years due to repressive governments. Thus, Elsayigh joined Odsess-Rubin in pushing for a greater celebration of work by the LGBTQ+ community. The festival’s name Criminal Queerness satirically reflects the threat these plays pose in their home cultures.

The success and coverage of its first year meant Criminal Queerness was able to expand for its second year. With funding from NYC Pride, the festival was staged on a large scale at the IRT Theatre in Manhattan in 2019.

The popularity of Criminal Queerness further soared in 2019. Indeed, Odsess-Rubin received the Mayor’s Grant for Cultural Impact and, in addition, the Mayor’s Office of Immigrant Affairs funding. For 2020 the festival planned for wider success, taking play submissions from 24 countries. In addition, this year Odsess-Rubin sought to show the diverse voices of the LGBTQ+ community, including refugees and asylum seekers to highlight the struggles they experience.

Due to theatres shutting during the pandemic, Dixon Place, the intended venue for the festival, has adapted the show online. In spite of this, Odsess-Rubin has high hopes for the festival. He sees the arts as an indispensable tool for promoting social change. Instead, he hopes by moving into a digital format, the traditional moulds of theatre will evolve. Being digital reflects how our generation consumes information. It also caters for all kinds of participation, which can be casual or on a daily basis. With admirable ambition, this year Criminal Queerness will bring together the LGBTQ+ community on a global level in this celebration of queer art.

More from Redbrick on this topic: