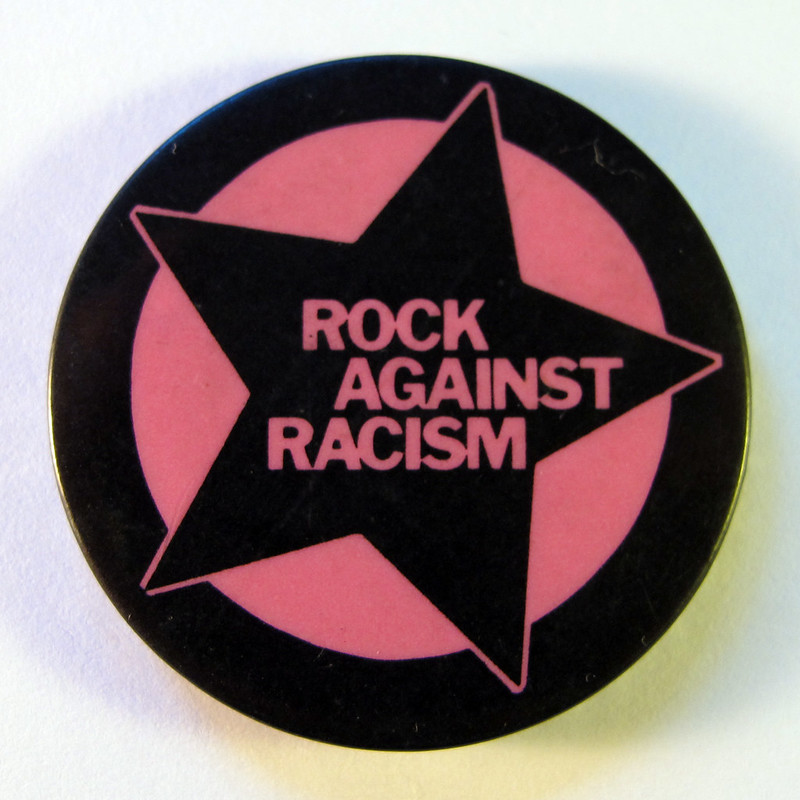 The History of Rock Against Racism

As a history student I spend most of my time looking at the past. Largely this does not provide me with any comforting stories but rather some interesting comparisons. Given the current climate surrounding the Black Lives Matter (BLM) movement, it seems fitting to revisit another time when music was used as a force for unity in a time of massive racial inequality and division.

Following the comments of guitarist Eric Clapton in 1976, vocalising his support for Right Wing politician Enoch Powell, whose famous ‘Rivers of Blood’ speech incited racial hatred towards immigrants, the idea of ‘Rock Against Racism’ came into being.

To truly understand the division of this period, we must briefly examine the history of the National Front (NF), a fascist political party formed in 1967, and the clashes of the 1980s. The racialised politics of the NF began to appeal to the disillusioned population of urban centres, particularly those who were unemployed, to spread their racial hatred across the country. Sadly, they were undoubtedly assisted by the aforementioned inflammatory speech given by Powell in 1968, which brought such radical right-wing politics into the mainstream. As such, the NF continued to grow in support and acted as a pressure group on the governments of the 1970s and 80s. On the streets, the reality for many minorities remained bleak, as violent attacks by the members of the NF were common. Frustration continued to grow from such communities, particularly from those born in England who felt rejected by their own country. The perceived failure of the police to protect these communities boiled over into riots throughout the 80s in areas such as Handsworth in Birmingham, Brixton in London and Toxeth in Liverpool, demonstrating the division of the time.

The idea of Rock Against Racism was simple: to use rock concerts to bring together people of all races and promote the debt of musicians such as Clapton to black artists; its founders, Red Saunders, Roger Huddle, and Jo Wreford amongst others, highlighted the hypocrisy of an artist whose first hit came with a cover of a Bob Marley song showing support for a racist politician. The first gig took place at the Princess Alice pub in London in 1976. Crucially, the concert featured a jam session by all of the artists, meaning that musicians both black and white performed together on stage, an uncommon sight at the time, something that continued throughout all of the gigs. By making young people in urban centres embrace different cultures through music, the key aim of the movement was to prevent the influence of the NF spreading within that age group. Quickly, localised Rock Against Racism collectives began to grow in most cities across England and even abroad, with local bands playing a prominent role in playing and organizing gigs. For example, in Birmingham, the band The Beat were local leaders. At the same time, record label 2 Tone Records was founded by the members of The Specials and promoted the music of mixed race bands making them a common sight for the era.

In an attempt to combat the rising violence of the NF, in 1978 a Carnival against Racism was organised, beginning with a march from Trafalgar Square to East London and followed by a massive concert headlined by The Clash and Steel Pulse, a reggae band from Handsworth. The whole day was a huge success and drew around 100,000 people to the march. In the same year, organisers started a tour across the UK to try and curb NF support in the upcoming general election, ending in a huge 40-band concert at Alexandra Palace with acts as varied as The Band, UK Subs, The Piranhas and poet John Cooper Clarke.

Although it cannot be put down totally to the impact of Rock Against Racism, the NF performance at the subsequent election was a total failure as their support base vanished.

At the very least, the use of music as a positive force to bring people together in such times of division provides a message of hope for current times, although of course music alone will not solve the struggles that the BLM movement aims to correct. However, it shows that some positivity can come from even the most dire situations, as hopefully will happen in this case also. The possible return of a similar scheme to Rock Against Racism would also prove an exciting prospect, and perhaps one that can have a similar effect to its predecessor (corona virus permitting, of course).

A Retrospective on Joy Division’s Last Ever Gig