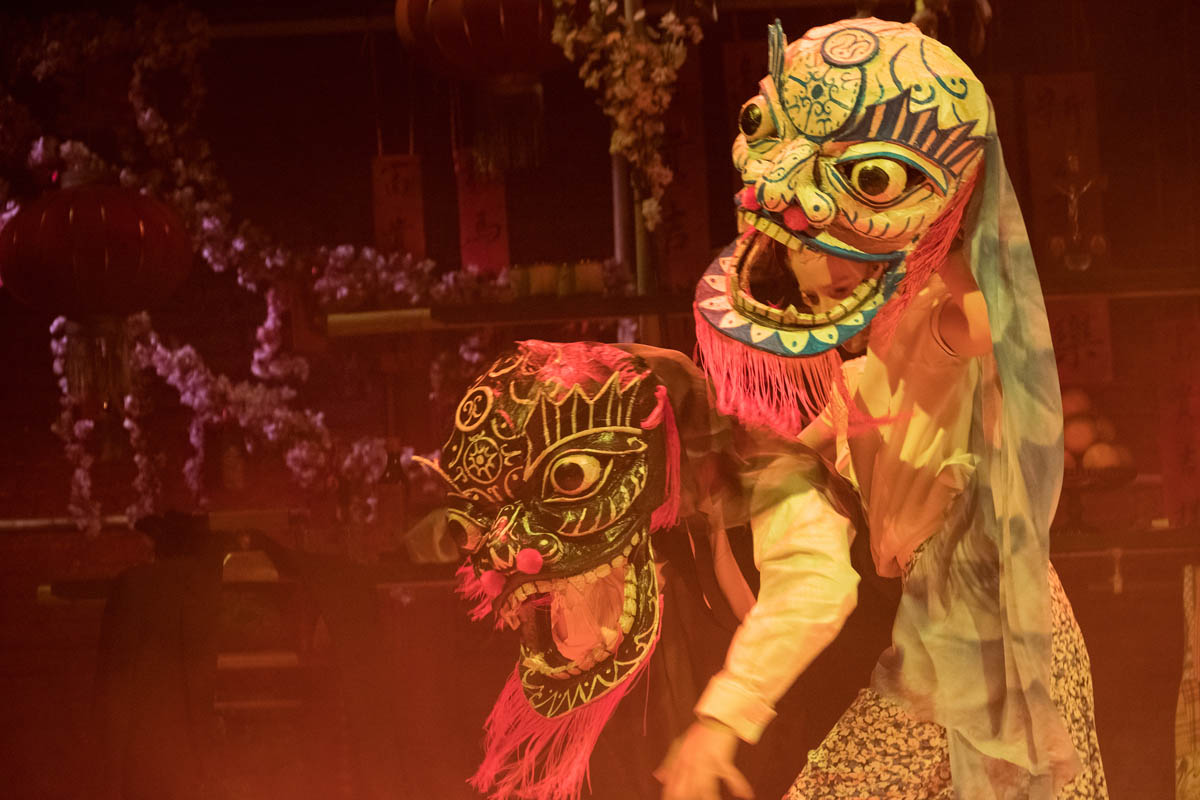 My trip to see Miss Julie at the Belgrade Theatre may have been my first visit to a live venue in several months, but interestingly, it was not my first time seeing this play. Having watched a recorded version of the National Theatre’s Julie (2018) over the lockdown, this provided a fascinating comparison to New Earth Storyhouse’s production. Both plays are adaptations of August Strindberg’s nineteenth-century play Miss Julie, focusing on the eponymous daughter of an aristocrat and her power struggles with the two servants who have essentially raised her – Jon and Christine. While the National Theatre’s Julie was a sequin-clad, cocaine-induced London party girl, the Belgrade’s Julie was the petulant, flouncy daughter of a British Governor, raised in 1940s Hong Kong.

It is not difficult to see why Strindberg’s play has been adapted twice in recent years: with its intense focus on a selfish yet neglected young woman, and her class dominance over two of her staff-turned-family members, there’s plenty of material to get your teeth into. The potential to explore themes of Empire and imperialism are also rife, which New Earth Storyhouse achieved with their vivid depiction of 1940s China. The theatre company works closely with British East and South Asian artists to encourage representation and discussion points, and this production certainly benefitted from this critical lens – however, this may have come at the expense of some of the raw character relations.

We were first introduced to Christine, portrayed by Jennifer Leong as a mild-mannered but passionately principled servant, both cleaning and caring thoroughly for Julie. Her mild countenance was offset by the arrival of Jon, delivered by Leo Wan as an apprehensive, verging-on-cockney young man, achieving moments of convincing frustration. Christine and Jon were engaged, a fact that was not immediately apparent to the audience, partly due to their underground lifestyle as servants (quite literally, the scene takes place in the basement of Julie’s mansion).

After several minutes of fairly slow-moving interaction, the audience was abruptly introduced to Sophie Robinson’s Julie, who floated on stage with an aura of self-involved glamour. She made productive use of the small theatre space throughout the performance, lying across the table luxuriously and almost exiting in moments of anger. While her exaggerated RP accent was an unusual and inconsistent choice, it did manage to portray her privileged education and upbringing in comparison to the other two characters.

Added to the mix of class prejudice, the production also chose to introduce the bubonic plague as a theme. Unfortunately, this felt like more of an attempt to add something especially relevant to the production (and allow for references to mask-wearing and hand-washing), rather than actually enhancing the character relations. A more compelling aspect was the references to imperial legacy, with the servants voicing their discomfort with Miss Julie’s lifestyle. ‘I don’t want to ride in stolen luxury’, responded Christine after being invited to ride in Julie’s personal car, which resonated with me far more than the slightly forced virus theme.

The play also wove in themes of cultural identity, particularly through the symbol of Christine’s red and gold qipao – a Chinese New Year gift from Jon. The dress hung on the wall throughout the first half of the play, and in a particularly poignant scene, we saw Christine admiring it before eating some of Julie’s leftover food – creating a stark contrast between coveted extravagance and desperation. Unlike the National Theatre version, this adaptation really foregrounded the experience of Christine, as she watched her fiancé fall for Julie, crafting her as the unexpected heroine.

Yet, if there was a villain in this play, it is difficult to work out who. Jon’s greed-induced relations with Julie were equated with Julie’s materialistic outlook in general – a comparison that didn’t seem particularly fair or warranted. But there was an interesting debate about the extent to which Julie could be condemned for her spoiled outlook, having been the victim of an absent father and alienated from Chinese culture. As Julie asked not to be blamed for the sins of her opium-pushing ancestors, this raised an important question about accountability.

With a minimal, aesthetically pleasing set of red Chinese lanterns and bamboo structures, the focus was placed on the three actors, and it was impressive that they managed to hold the audience’s attention for a full 75 minutes. Having said that, the multitude of themes proposed for the cast to navigate (spanning race, class, gender and even a plague) proved to be too ambitious, and the quality of the performance suffered as a result. Director Dadiow Lin has crafted a commendable production, which should be praised for its complex content, despite its disappointing execution.