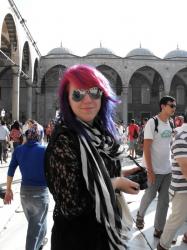 Hannah Stevens
Hannah Stevens is the Online Travel Editor and is studying Ancient History at the University of Birmingham. http://alturl.com/7qoz5
Published at 22:07 on 24 February 2015

Tucci has been a steadfast presence throughout Hollywood history, often only really noticed when acting alongside Meryl Streep in works like The Devil Wears Prada and Julie and Julia. Yet he is often ignored and passed over for decent acting opportunities in favour of more popular names. He has frequently proved his acting ability as equal to some of the Hollywood greats, including impressive turns as a wide array of characters. He became a sordid serial killer in The Lovely Bones, a gay man who had achieved his long-held dreams in The Devil Wears Prada, and has transformed into the eerie Caesar Flickerman in The Hunger Games series. And yet he remains woefully under appreciated by the acting world.

4. ROBERT CARLYLE
He has performed as one of the best zombies I’ve ever seen in 28 Weeks Later, a man desperate for the love of his son in The Full Monty, and currently stars as the manipulative and creepy Rumpelstiltskin in Once Upon A Time. Carlyle has had an enduring career and been handed several impressive roles that allowed him to explore his abilities, but he has still struggled to get the chances he desperately needs to prove his ability to take on any role without hesitation.

3. IDRIS ELBA
Thankfully Elba has finally begun to receive some more mainstream roles that allow him to show off just a small portion of his capabilities. However, his recent roles in Thor and Pacific Rim are nothing on his turn as Luther in the series of the same name, his portrayal of Nelson Mandela in Mandela: Long Walk to Freedom and as Mumbles, a small time criminal, in RocknRolla. Despite some major roles he is still yet to properly recognised by the wider acting world as anything more than a supporting actor, but with time I am sure he will make his way to the top, where he deserves to be.

2. HUGO WEAVING
Hugo Weaving has consistently been a recognisable face throughout his career but has never been a name that immediately springs to mind when thinking of prominent actors. He has turns in huge blockbusters, like The Matrix and The Lord of the Rings, whilst also taking roles that allowed him to highlight his skill, including V for Vendetta and Cloud Atlas. Sadly he still remains a face that hides in the background and loses out on roles that deserve to be his.

Hounsou has had some hits and misses in his career and has even been nominated for two Academy Awards. Yet he still remains at the edge of Hollywood’s radar. He’s proved his skill in films like Blood Diamond, but has been dragged into some disappointing roles in Push and Eragon. It’d be nice to see him move his career in a direction that will exemplify his prowess.

1. EMILY BLUNT
Blunt’s acting career has been mostly entrenched in fairly standard romantic comedies and stereotyped roles. But, her first role that hinted at some promise has got to be The Devil Wears Prada; an iconic role for Meryl Streep also gave the chance for Blunt to put herself in the spotlight. After roles in The Young Victoria and Salmon Fishing in the Yemen Blunt’s abilities really begun to shine, and with roles in films such as Into the Woods it looks as though she might be finally getting some chance at proving herself.

2. JAMIE CHUNG
Jamie Chung has to be one of the ultimate success stories for reality TV stars; she has clawed her way into an acting career one step at a time. From tiny bits parts in films like Grown Ups and I Now Pronounce You Chuck And Larry to crappy slasher films like Sorority Row, she’s clambered her way up the career ladder. But it was her role in Eden that made me realise that the girl can actually act! Her harrowing turn as a kidnap victim drawn into the sex trade gave her the scope to bring herself to a whole new level. Hopefully with more roles like this she’ll eventually find her career heading in the direction it deserves.

Her career has seen some massive ups and downs and in the process Halle Berry has driven her career so far into the ground many forget that she could once act. After her incredible performance in Monster’s Ball Berry looked like she could do no wrong, how wrong we were. She proceeded to take several continual roles that have successfully run her career into the ground, with roles in Gothika, Catwoman and Movie 43. But, with her recent role in Cloud Atlas there is light at the end of the tunnel. If only directors would forget her bad choices and remember the great actress underneath.

4. VIOLA DAVIS
Davis has worked hard to get where she is now and after heart-wrenching performances in The Help and Prisoners she’s finally being taken seriously as an actress. Her current role as Professor Annalise Keating in How to Get Away with Murder proves that she can be as diverse as some of the biggest names out there. Despite being often ignored in Hollywood it’s looking like she might be getting some better roles soon after all. With her recent casting as Amanda Waller in the film adaption of Suicide Squad it looks like she’ll be stepping up her game.

5. JUNO TEMPLE
Temple has proved time and time again that her acting range is broad and that she can be transplanted into any personality with ease. Her focus on indie roles has given her the opportunity to rack up an impressive resume, but she is still struggling to get roles in the mainstream market. She’s taken small parts in films like The Dark Knight Rises, Horns and Maleficent, but they are yet to catapult her into the stardom she deserves. Perhaps with time people will begin to take notice of her skills and give her a better chance at taking Hollywood by storm.