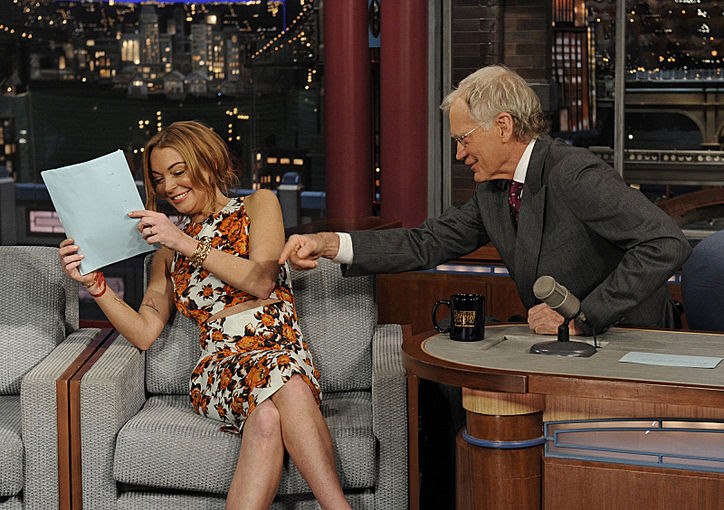 ‘We’re here for a movie,’ Lindsay Lohan stammers, clearly flummoxed by the interrogation she has just had to endure from David Letterman, who has not only crossed the boundary into her personal life by incessantly probing into the complexities of her issues with substance abuse, but has somehow managed to simultaneously ridicule her struggle in a ‘jocular’ way at the same time. The viral resurface of this interview from 2013 on almost every single social media platform, ranging from Twitter to TikTok, has left viewers mortified and enraged across the globe. Whilst Letterman and his representatives refuse to comment on the situation, let alone apologise, writers everywhere have plunged into a frenzy of investigative journalism, uncovering other uncomfortable videos from The Late Show with David Letterman that include interviews with Paris Hilton, where he mocks her recent jail sentence, and Jennifer Aniston, where he sucks on a strand of her hair for ‘comedic’ purposes.

The re-emergence of these clips from decades ago, coupled with the publication of articles in notable newspapers, like The Independent and The Telegraph, and the release of The New York Times documentary Framing Britney Spears, has opened up an important dialogue about the sexist maltreatment and abuse of female celebrities in Hollywood, thus extending the scope of the #MeToo movement. However, rather than using this feminist lens to magnify the misogynism in the entertainment industry, I want to take a different angle with this piece and zoom out to a more general picture to ask the question: how much privacy can celebrities expect?

According to the Oxford English Dictionary, an interview is ‘a meeting of persons face to face… for the purpose of formal conference on some point.’ When it comes to celebrity interviews, the ‘some point’ is conventionally of commercial interest. Prior to a film or television show’s release, directors and members of the cast conduct a series of media stunts, including interviews on talk shows among other promotional tactics like social media posts, in order to gain publicity for their work, which in the long run sustains the economic aspects of their careers. Initially, most of these tasks were quite subtle, apart from the occasional one-liner advertisements, but many celebrities today have brought this ‘secret’ to the fore and have chosen to openly state the ulterior motives of the interview process.

This has particularly been the case for Channel 4’s Krishnan Guru-Murthy, who has driven his celebrity interviewees to the point of no return with his aggressive questioning style and relentless focus on deeply personal topics. For example, Guru-Murthy would not stop asking Robert Downey Jr. about his previous addiction problems, until Downey Jr. refused to continue and took off out of the room; a similar thing happened with Quentin Tarantino, as when he was pushed to talk about his beliefs on the correlation between violence in movies and real life, he declined to answer but instead of fleeing the scene, he chose to fight back instead, yelling ‘I’m shutting your butt down’ in Guru-Murthy’s face; Richard Ayoade suffered the same fate after being asked about his thoughts on the lack of diversity within his industry, but the comedian chose to throw out a string of jokes that Guru-Murthy could not return, reeling them back in with an enlightening observation of ‘the essential lie of the interview situation’. Despite the difference in reaction and response from each celebrity, what all three of these interviews had in common was the fact that they were inherently promotional. Downey Jr. was there as an actor in the latest Avengers film, Tarantino had just released his revisionist Western Django Unchained and Ayoade was there for his first comical book on film. In fact, at certain points this was made abundantly clear with blunt comments like ‘are we promoting a movie?’ and ‘this is a commercial for my movie.’ From these instances, it is undeniable that celebrities are reaping in the benefits of interviews, so if they are being given this free publicity as a favour, do they not have a duty or the responsibility to answer all questions?

Well the trouble is that on the flip side, the interviewers are doing the exact same thing. Letterman’s nighttime talk show and Guru-Murthy’s newscast gain just as much publicity for their networks as celebrities do for their TV series or films or books. Therefore, this is an economic, trading exchange between both parties. Regardless of the themes explored in an interview, ratings rise. However, viral coverage and popularity is gained through controversy. Letterman brought up Lohan’s alcoholism because it was all over the tabloids and he knew it was a hot topic; Piers Morgan asked Caitlyn Jenner about her sex-reasignment surgery because she had just transitioned; Guru-Murthy brought up Tarantino’s portrayal of violence, because of the ‘sensitive time’ surrounding the interview when the then Vice President Joe Biden was claiming that video games ‘teach you to kill people.’ Digging up the dirt on a celebrity’s personal life and asking them uncomfortable questions sends ratings through the roof, because it confirms the rumours or scandals that everyone is interested in.

However, a key argument that Guru-Murthy has made is that his interviews are an opportunity to ‘ask wider ranging questions’ and ‘discuss something serious and illuminating,’ which introduces the idea of ‘public interest.’ The blurred line between harmless, juicy gossip (which falls under a celebrity’s job description) and the invasion of their personal lives is an extension of the ongoing debate between the conflict of guaranteeing everyone’s right to freedom of expression, as well as the right to privacy. Both rights are of equal significance and so it is a challenge to maintain the stability of this balancing act; however the two rights also have restrictions, meaning that they can be limited in certain situations. The most notable case of this concerns celebrities, as ‘if a story is in the public interest, a judge may rule that the celebrity’s right to privacy should be limited for the greater purpose of informing the public.’ So then the question becomes how do we classify what is ‘public interest’ and what isn’t?

Unfortunately, it is impossible to give a definitive answer, but let me ask you this: did Piers Morgan do anything for the public by mocking Caitlyn Jenner’s surgery and her response to his offence? Did Krishnan Guru-Murthy do anything for the public by continually pushing Robert Downey Jr. to explain his addiction issues? Did David Letterman do anything for the public by exposing and ridiculing Lindsay Lohan’s struggles with substance abuse, which eventually drove her to tears? Whilst celebrities appear to be superhuman, they are in fact human beings that have emotions like any other ordinary individual. TV interviews are not designed to be an amphitheatrical arena where the interviewer and the celebrity battle one another to the death like Roman gladiators. They are much more mundane than that and perhaps this is best summed up in Richard Ayoade’s comparison of an interview to a commute – an affair that is tedious, but necessary.

Want to find out more about problems in the TV industry? Check out similar articles here:

Queen’s Gambit: Romanticisation of a Woman on the Edge