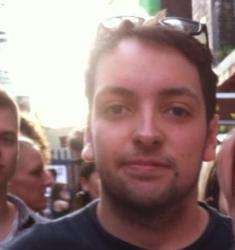 Ali Griffiths
Ali is a English Literature and Philosophy student and our environmental correspondent, ensuring we're up to date with any news and events on campus surrounding environmental issues.
Published at 15:31 on 4 March 2014

At the VP Welfare hustings all the candidates gave initial speeches, before each being given 90 seconds to explain one of their policies in detail. This was done instead of accepting questions from the floor, due to an unforeseen technical issue.

Frankie ‘Says Relax’ Greenwell was the first Welfare candidate to speak. Frankie mentioned his plans to re-start the universities’ Sexual Health Awareness and Guidance week (SHAG Week), despite the project failing to take off a number of years ago, which he said was mainly due to a lack of inclusive events. Frankie also outlined his plans for an online welfare resource, where students can find information about topics that concern them, written by their peers. Frankie’s final manifesto point was his desire to increase the number of day-time fresher’s events, which he explored in more detail in his later segment. Next up was Julie ‘Jaffa Cake’ Ledesma, who focused on her desire to begin each semester with a ‘welfare week’, where freshers could attend workshops on how to deal with mental health issues that affect many students, such as stress and anxiety. Julie also took time to describe her intentions to set up an online welfare space, and went on to explain her plans for the university’s ‘extenuating circumstances’ system in her second speech.

Third was Helena Dunnet-Orridge, who delivered an empowered speech that highlighted the various cornerstones of their manifesto. Helena explained that there was no clear way to report sexual assault within the university, and outlined how it would be incredibly feasible to fix, by setting up relationships with outside groups, such as Birmingham and Solihull Women’s Aid. As well as this, Helena also spoke about attaining a ‘living wage’ for all student support staff employed by the university, and the importance of supporting and preserving the liberation officer positions. Helena went in to more detail about how advice and support can be offered to victims of sexual assault in her 90 seconds at the end.  Finally, postgraduate student Themistoklis Pagoudis spoke about the ‘underrepresentation of mature and international students in the Guild’, as well as his desire to improve safety on the street, especially around Selly Oak and the Vale.

Themistoklis was the first candidate to explain the intricacies of one of his policies within 90 seconds, and also managed to speak about some broader issues. Of particular importance was his desire to encourage students and listeners to look at the candidate’s manifesto’s, and not let popularity sway the vote too much. As well as this he also spoke about making the Guild a more open, transparent organisation.

In their 90 seconds Helena was able to give specific information about how, as welfare officer, it would be possible to ‘create a link with local rape crisis centres and work with women’s aid’ to help students who have been victims of rape and sexual assault. Helena also described how legal advice and specialised councillors should also be contacted in situations where they’re required.

Julie described her plans to course –correct many of the bad attitudes towards students and extenuating circumstances that she claims are present in some of the universities schools. Julie described how she would implement a clear, strict set of guidelines that would run campus-wide, in an attempt to combat a lack of consistency currently present.

Finally, Frankie explained his plans to host a number of day-time fresher’s events, which he argued there were simply not enough of. He stated that the current range of club nights out and pub crawls wasn’t suited to everyone, particularly those people who don’t drink. He also claimed that the current selection of ‘non-alcoholic’ events only served to marginalise that group of individuals, and an entirely inclusive program would be a far better way for people to integrate in to university life.