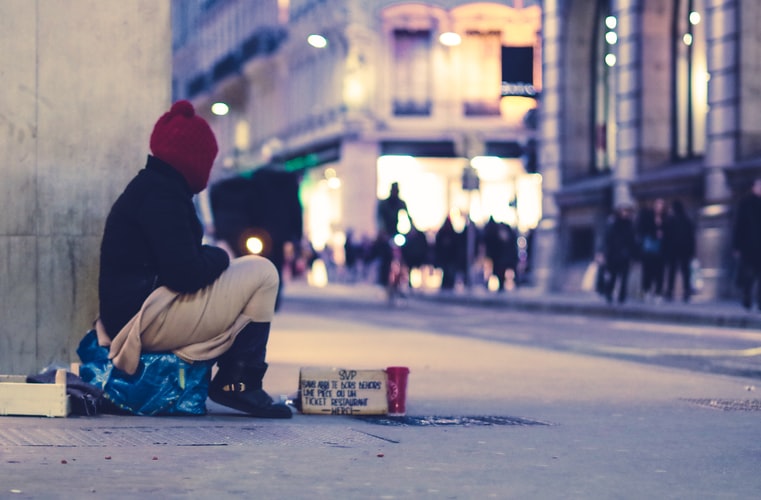 Comment Editor Colette Fountain highlights the damaging effects of Neoliberalism on homelessness , and argues as a society we have forgotten how to be kind

According to the charity Crisis, there are currently an estimated 200,000 homeless people living on the streets in the UK alone. Surprisingly, this figure has fallen from 220,000 in 2019, partially as a result of additional measures put in place by the government as a response to the pandemic. However, while it is obviously good that these figures are on the decline, as a society we still have a long way to go to fix the root causes of homelessness and provide adequate assistance to those in need.

One of the most damaging ideologies to emerge in the West is the theory of Neoliberalism: an individualistic ideal that argues that state intervention should be kept to a minimum and instead, it should be up to the individual to achieve success and financial prosperity. This links closely with the theory of meritocracy which also argues that the individual gets out what they put in, failing to take into account systemic issues which make this impossible. Meritocracy is less explicitly damaging than neoliberalism – after all, who would not want to live in an idealistic society in which everyone has equal opportunities regardless of their background, however, this is not the reality and the belief that it can be is extremely harmful, particularly to social issues such as homelessness. Politicians like Reagan and Thatcher were hugely influential in developing this sense of individualism and the idea that if someone is living in poverty, they should simply find ways to lift themselves out of it, without the help of government assistance, reflected in Thatcher’s policies which minimised state intervention as much as possible.

These beliefs are still prevalent within today’s society, a legacy that has caused long-term issues for Britain in a multitude of ways, including its homeless populations. Neoliberalism promotes the idea that every man is out for himself, thus meaning that in helping another person, you could be affecting your own chances of success. This affects homelessness as it leads to a reluctance to donate, or to vote for a party that will implement policies that might help lift people out of their poverty – simply put: if they remain homeless, it’s one less person to compete with.

This belief also promotes the idea so frequently expressed that if they do not want to live in poverty, they should simply ‘get a job’. While this might seem easy to someone who is employed, in reality, there are an impossible amount of barriers that homeless people face when applying for jobs. For starters, a lack of access to a computer or printer makes it very difficult to create and distribute CVs. Similarly, most jobs are advertised online, again creating a barrier to homeless people. Perhaps a solution you might offer would be going to a library to use their facilities, however, in order to get a library card you have to have an address in the area. Then let’s say that they do manage to apply for a job – how is the employer meant to get in contact with them to let them know the details for an interview? How are they then meant to go to the interview without a suit or transport? In fact, without transport, it is unlikely that the employer will hire them as it means they will be less reliable than other candidates. Then if they get the job, how will they be paid? It is impossible to open a bank account without a permanent address and very few employers will be willing to pay their employees with cash. Hopefully, this highlights just a few of the issues that homeless people face which contradict the meritocratic society people are so desperate to believe in – how on earth could you expect someone to simply ‘get a job’ when they face this many obstacles?

While charities and initiatives are being started to try and help with some of these issues, most notably with providing suits, the government has done very little to solve these problems. The charity, Suited for Success loans suits to homeless people for job interviews, yet this does not help the multitude of additional issues. Similarly, H&M recently started an initiative which allows people to rent a suit for 24 hours for free, something which is intended more as an environmental cause but one that could potentially help the homeless communities. But again, the government has done very little to provide support for these issues, leaving homeless people reliant on charities like the Big Issue and Second Shot Coffee who will hire those in need.

Finally, a recurring issue with the way people view homelessness is the stigma around addiction, with people being reluctant to give them money in case they spend it on drugs and alcohol. I cannot think of a single other instance where people would be concerned about giving someone money for the same reasons – in no situation would an employer ever question what their employees were choosing to spend their salary on because it would be invasive and rude, so why is it that it is ok to make assumptions about homeless people? Why is it worse for a homeless person to spend money on drugs than a wealthy banker, glorified in films like the Wolf of Wall Street? Statistically, in the US around 38% of homeless people suffer from alcohol dependency, a statistic matched exactly to the population of men in the UK who regularly drink over the recommended 14 units a week. This might be an unpopular opinion, but if someone who is living on the streets needs alcohol to survive, whether that be through addiction or because of prior trauma which is often a significant factor in causing homelessness, then why should we be the ones to stop them? Until the government starts to provide better rehab facilities and better homelessness shelters, who cares if the money I give to a homeless person is used to buy something that makes their life a little less unbearable.

These neoliberal ideas have become incredibly damaging to the ways that our society functions, and nowhere more so than in the tackling of homelessness. It is everywhere in our societies; it is almost impossible to walk down a city street without seeing at least one person sleeping in a shop doorway or asking for money, and yet we continue to turn a blind eye to it, believing it is easier to worry about ourselves than look out for those around us. Neoliberalism has taught us to be unsympathetic and cold. We have forgotten how to be kind and nowhere is that needed more so than with the most vulnerable people on our streets. So maybe, the next time you walk down your local high street, buy someone a coffee, donate some money, or simply just talk to them, because a society in which we no longer view homeless people as people is not one I want to be a part of.