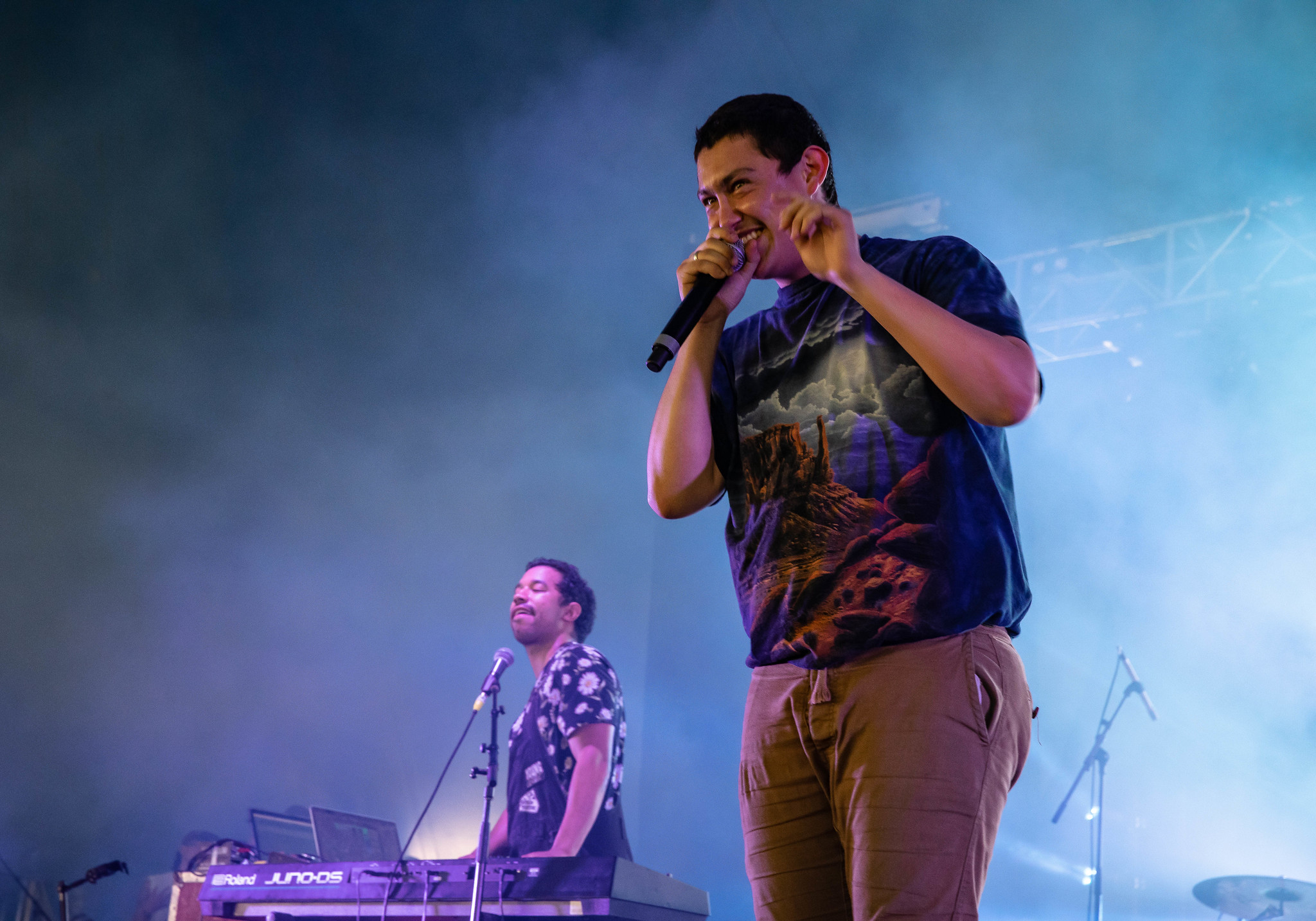 A Beginner’s Guide to: Hobo Johnson

Music Critic Colette Fountain takes us through the career of Hobo Johnson, arguing that his music is unlike anything she has heard before

Frank Lopes Jr., performing under the stage name Hobo Johnson, is a 26 year old performer with around 1.3 million monthly listeners, perhaps best known for his song ‘Peach Scone’ which disguises a love song within lyrics literally describing a peach scone. I am fascinated by Hobo Johnson – his music is unlike anything I have heard before, combining an almost-spoken-word style vocal with ingenious, emotive lyricism – and I can’t get enough.

Hobo Johnson took his name from personal experience, having been kicked out by his father at 19 and spending time living in his car, issues he routinely addresses in his music. Key themes he explores include loneliness, mental health, dysfunctional families and religion, often juxtaposing these nihilistic themes with more upbeat instrumentation. While Hobo is the lead vocalist, his band ‘The Lovemakers’ are integral to his music, often providing a kind of incoherent vocal noise which adds layers to the music I have not previously heard. As a result of their incredible vocals, their music is best experienced through live performances, with their Tiny Desk performance being a personal favourite of mine.

The Rise of Hobo Johnson:

His first album, released in 2016 and remastered in 2017 is my personal favourite. A common theme across his music which is established in this album is the references to pop culture, with his song ‘Mario and Link’ using the classic Nintendo sounds as instrumentals. Similarly ‘Romeo and Juliet’ addresses his family issues and the trauma resulting from his parent’s tumultuous relationship.

This is perhaps his most emotive album to date, dealing with existential issues like religion in his song ‘Jesus Christ’ where he writes ‘I / would kneel down, but I’m afraid that I would just feel nothing,’ a sentiment also expressed in later albums. These lyrics are accompanied by fairly simplistic instrumentals, mainly focusing on a piano, adding to the emotional impact of the song and highlighting the grittiness of Hobo’s vocals which so clearly express his pain.

My personal favourites from this album include the aforementioned ‘Jesus Christ,’ ‘Creve Coeur 1,’ and the more upbeat ‘Sex and the City,’ again referencing pop culture. While many of his songs are more serious, a lot of his music uses comedic lyrics to juxtapose these themes, something present with ‘Sex and the City’ as he sings ‘If I look like Brad Pitt mixed with a bit of Jake Gyllenhaal / and a bowl of David Hasselhoff I wouldn’t be here at all / I’d be in Los Angeles / Or at your mom’s house eating all the sandwiches!’

The Fall of Hobo Johnson:

Despite the album’s title, I would say on the whole this 2019 album is more optimistic than The Rise of Hobo Johnson. This album opens with ‘Typical Story,’ a high energy song with a great electric guitar riff which is personally my favourite live performance of his as he regularly sprays the crowd with water, using it to hype them up for the chorus. The music video for this is equally entertaining and highlights the more comedic parts of Hobo’s music making it the perfect introduction to his style. Similar to ‘Typical Story’ is the song ‘Subaru Crosstrek XV’ which is a very tongue-in-cheek song basically advertising the off road vehicle, again highlighting the more comedic elements of his music.

Whereas The Rise is one that I always listen to in its entirety, The Fall has some that I often skip, most notably ‘You & the Cockroach,’ a political commentary about Trump, and ‘Uglykid’ as I feel that these lack the inspiring lyricism that he is known for. Despite this, some of his best songs feature on this album, with my favourites including ‘February 15th,’ a song capturing his overwhelming fear of being alone as he repeatedly shouts ‘I’m gonna be alone forever’ over a solo guitar. ‘February 15th’ never fails to make me emotional and perfectly combines the poetic elements of his lyrics with beautiful vocals which combined are certain to give anyone goose bumps.

The Revenge of Hobo Johnson:

While this is my least favourite album of his, this 2021 release is clearly the one in which he had the most creative freedom. The opening song, entitled ‘Anton LaVey’ after the founder of satanism, is more comedic, as Hobo’s character falls in love with the satanist and ‘[sticks his] tongue down his throat.’ However, it simultaneously deals with the serious themes Hobo addresses such as a fear of death as an atheist because ‘this heaven is weird.’

Like his previous album, Hobo questions politics with my favourite example of this being ‘I want to see the world’ which taken at face value is simply expressing his desire to travel, but on a deeper level addresses various global issues, many of which he blames on American politics. Similarly the songs ‘Song 9 (The Government’s Not Great)’ and ‘Prequel to Animal Farm’ address these themes, making it perfect for those interested in politics.

Although the album is more upbeat, with Hobo referencing his therapist in ‘My Therapist’ and previous trauma in ‘You Need Help,’ he still has some solemn songs with my favourite from the album being ‘You Want a Baby’ in which he addresses fears over having a baby, singing that ‘My genes make me struggle / why would I pass that off to you?’ despite his girlfriend’s hopes for a family. This perfectly reflects back on some of the fears expressed in his earlier albums regarding his mental health and the impact this has had on his relationships, however now more optimistically, closing the album with ‘Outro’ which is intended to be comedic and sounds almost like a movie trailer.

It is difficult to put into words just how much I love Hobo Johnson’s music. Everything about it is truly exceptional and I am not sure I will ever be able to find another artist that makes me feel things the way that Hobo does. I hope that this has provided some guidance with where to start with his music and, in the wise words of Hobo Johnson in ‘The Ending’; ‘the way I listen to music is fucking, like medicine, dude….and my dream is to do that for other people.’

A Beginner’s Guide to: Ryan Tedder

A Beginner’s Guide to: Disco