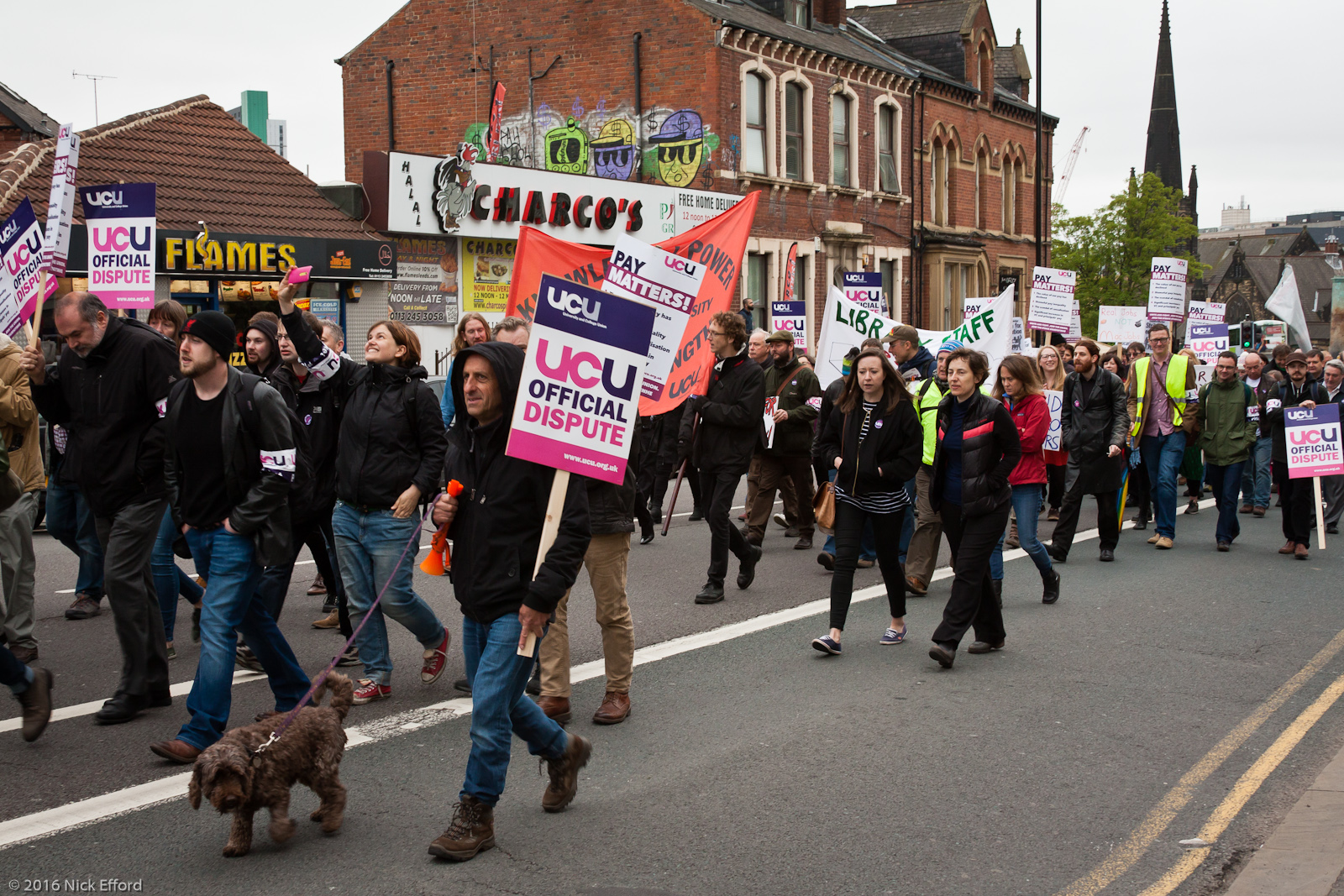 Written by Molly Elliott
Published at 13:00 on 25 November 2019
Images by Nick Efford

Industrial strike action is a phenomenon that can be found across many industries in British history. The stories of strikes have often captured the British public’s attention, anger and imagination.

From the films about the success of the Ford sewing machinists of 1968 to the picket line publications of the failed Wapping dispute in 1986, the tales of stalemate are well documented and diverse. But before an incident of strike action is transformed into a blockbuster, it is important that we try to unpick the complex context surrounding the events. I want to untangle the issues surrounding next month’s academic strikes, and understand the academic staff’s reasons behind striking.

Between the 25th of November and the 4th of December, academic staff across the country who are members of the University and College Union (UCU) will be striking to raise issues of pay (including topics such as equality and the state of casual work) and pensions. I have interviewed three academics, one on the committee of the UCU Birmingham branch, and asked for their opinions of the strikes.

In total, 60 universities are taking part in the strikes, with a majority striking over both issues, and some striking over pay or pensions alone. UCU members in the University of Birmingham have voted to strike over both issues, with 82% supporting strikes over the issue of pensions, and 77% supporting the issue of pay. The striking staff are not just lecturers, but include other academic roles such as librarians and researchers. The University’s support staff – belonging to a different union – were striking in October over similar issues with pay and working conditions.

This is not the first time academic staff have gone on strike in the UK. Last year the UCU conducted strikes in February and March, causing widespread disruption to teaching hours and exams. The strike was unprecedentedly long for the higher education sector, and was fought over the issues with pensions that are still causing issues today. But here in Birmingham, the union did not reach the all-important 50% turnout on the ballot, meaning University of Birmingham academics did not take part in the strike. It is also interesting to note, the UCU branch committee member explained, that the 2016 Trade Union Act is the reason for the 50% turnout requirement, and in Birmingham there has been notably less UCU strikes since 2016.

One academic told me that reaching the 50% mark this year was unusual for Birmingham. They stated: ‘We’ve got a terrible reputation for not actually being able to reach the 50% threshold’ and praised the new leadership of the UCU for the achievement this year; ‘we’ve got a really switched- on, young, energised branch now and they’ve gone out and just knocked on doors and canvassed and got the vote out.’ But for this academic, the national numbers are still slightly disappointing.

‘There’s going to be a certain unevenness on a national level, it gets a bit messy, and I’m not sure that was the best way forward. My feeling is for any kind of industrial action you need a really sharp focus.’ Perhaps the strike over two separate issues will cause issues for the union, as their demands are less clear, and the national ballots are not uniform.

They also expressed concern over the proposed length of the strike. They described the eight days as ‘absolutely unheralded,’ and suggested that this ‘probably reflects the change in leadership at the top of the union.’ The change in leadership of the UCU was a hot topic among the academics I interviewed. Jo Grady is the new General Secretary of the UCU, and she seems to have a reputation for fresh determination. Another academic told me: ‘I think people I know were taken aback, and I’m sure University administrators were taken aback because they were expecting that the old rules applied and there’s a new sheriff in town,’ calling the eight days ‘a much more aggressive approach.’ For Birmingham, therefore, the upcoming strikes seem unprecedented for two reasons: it is the first successful UCU ballot there has been in at least three years, possibly longer. And, the new UCU leadership’s no nonsense proposal for eight consecutive days of action appears to have come as a surprise.

The academics I spoke to welcome the action being taken by UCU, but they still expressed concerns about the impacts on themselves and their students. It is clear that the strikes will cause financial losses for the academics, with one telling me that they had not expected such a long strike period when they voted: ‘I think if they’d have said “we’re going to strike for eight consecutive days,” I bet they wouldn’t have [won the vote] because that’s a huge amount of money to say no to, especially at this time of year. It’s a massive sacrifice.’

This was something I had not considered before, but when I asked whether this information should have been clearer at the time of voting, the academic showed solidarity for the Union and the strikes. ‘No, I would have still voted in favour of it. I think if you’re in a union you’ve got to expect to make those kinds of sacrifices. Whether everybody will or not here is another matter.’ This academic clearly feels that the November strike action is important enough to give up money and teaching time.

The overriding sense I felt from both academics I interviewed was that they did not want to cause disruption to their students, but they had no choice. One argued: ‘The problem is that if lecturers ever take industrial action, the only people we can harm are students… we want to harm the people who sit in the big building over there [pointing to Chancellor’s Square]. The people who pay themselves, and there’s a lot of them it’s not just [David] Eastwood, nobody knows quite what they do but they pay themselves an excess of a hundred thousand pounds a year for doing it. And they make our lives fucking miserable.’ I think it is important to remember that the strikes are going to be difficult for both students and academics; they have not been voted on lightly.

When I asked what students could do to help, the message was clear. One academic told me ‘it would be nice to think that most of the students will be behind us, I’m not sure they are, I’ve been on picket lines, I’ve taken a bit of [abuse] off students.’ Another praised the students last year who walked pickets with the academics at striking universities. Messages of support and understanding from students will help the strikes achieve change. The most powerful thing we can do, I believe, is hold the university systems accountable, rather than just show anger at missed lectures.

A UCU branch committee member told me: ‘Things students can do include – if they want to express anger about the situation – write to the Vice-Chancellor, or, join us on the picket lines.’ Students will be a key part of the picket lines – they excitedly told me of the current plans – ‘we’re hoping to get musicians and make it a bit of a fun atmosphere, not a confrontational atmosphere.’

The issues raised by the academic staff suggest to me a more systemic problem. Politicians and government officials have expressed very few solid solutions so far. All three academics had low hopes for help from the government. The UCU branch member seemed particularly unimpressed by the responses of the government, but more so by the University:

‘It becomes more difficult when universities send stuff out to students and say “we’ve got no power to do anything about this, it’s not about us it’s a national level thing”. Well the truth is, at this University, David Eastwood has an enormous amount of power.’ They argued strongly that the senior staff at UoB could have a big impact on the strikes: ‘If our leadership came out and said “we want to pay staff properly, we want to close the gender pay gap, we want to end casualisation” and argued for it with their fellow employers, it would start to happen. They do have power. So far, they haven’t used it in that way.’ I have indeed found it difficult to find evidence of efforts to concretely negotiate with the UCU, on part of the government or individual university leaderships.

The Department of Education released a particularly vague statement: ‘We hope that a solution to the dispute can be found that will result in a positive outcome for providers, staff and students.’ It appears that there is a waiting game, to see what can be achieved on both local and national levels, and who will be willing to negotiate first.

The opinions of the three academics I managed to interview cannot be taken to represent all of the academic staff at the University of Birmingham, or elsewhere. However, it is important for us as students to aim to understand the issues being faced by our academic staff, and it is up to us to support them in the next few weeks.

On the 12th of November, Jo Grady released a statement that strongly confirms the thoughts of the academics. She urges that pressure of Vice-Chancellors and other senior members of staff will help shift the government into action, and ultimately she displays little signs of backing down. With an interesting few weeks ahead, I think most academics and students alike will be hoping for successful and sustainable negotiation outcomes. If nothing else, come to the picket lines, talk to your lecturers, and learn something you cannot learn in class.

Redbrick reached out to the University, who provided the following comment:

‘After a national ballot of academic and academic-related staff members by Universities and Colleges Union (UCU), we have been advised that members at a number of Universities, including Birmingham, will take strike action between 25 – 29 November, and 2 – 4 December. Most students should see very little impact on their studies as fewer than 10% of academic and related staff voted for this strike. Our priority is to ensure that our students continue to receive an outstanding education.  We recognise that strike action may cause concern and we have written to all our students to assure them we are doing everything we can to minimise impact.

‘The University will make every effort to make alternative arrangements for any cancelled events, including lectures, seminars, individual appointments, lab sessions, etc. This might include scheduling additional sessions at other times and making supporting materials available that students can review through Canvas. This will help to ensure that students do not miss any of the essential content for their course. In addition we will ensure that students are not disadvantaged in any assessment activity. Hand-in dates and deadlines may be extended if these are affected by any cancelled teaching and students will not be assessed on any content that has not been covered due to disruption. Where any content or assessment of learning outcomes is aligned with professional body accreditation, we will ensure that this content is covered within rearranged sessions. We hope that UCU will continue to maintain an open dialogue in order to try to resolve this national dispute.’

Further information for students is available on the University’s website.